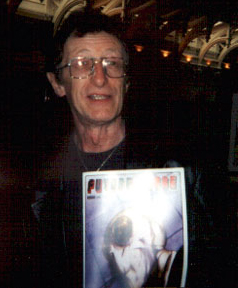 Alan Grant first entered the comics industry in 1967 when he became an editor for D.C. Thomson before moving to from in 1970 to work for IPC on various romance magazines.

After going back to college and having a series of jobs, Grant found himself back in Dundee and living on Social Security. He then met , another former D.C. Thompson editor, who was helping put together a new comic for IPC, "2000 A.D."", and was unable to complete his other work. Wagner asked Grant if he could help him write the "" comic he was working on; so began the Wagner/Grant writing partnership.

Wagner asked Grant to write a strip for "", a "2000AD" spin off, which eventually got Grant noticed within IPC. On a trip to , Grant was introduced to , then editor of "2000AD", who offered Grant an editorial position on the comic. One of Grant's first jobs was to oversee the merger of "2000AD" and "Tornado", an unsuccessful boys adventure comic. Grant also featured as a character in the comic in the form of ALN-1, Tharg's Scottish Robot assistant. Grant found himself in conflict with IPC and resigned to become a freelance writer, writing the occasional issue of "Future Shock" and "Blackhawk".

Grant then formed his partnership with Wagner after the pair lived and worked together; the pair eventually co-wrote "Judge Dredd". They would work on other popular strips for the comic, including "" and "" using the pseudonym T.B. Grover. Grant also worked on other people's stories, changing and adding dialogue, most notably "Harry Twenty on the High Rock", written by .

"Judge Dredd" would be Grant's main concern for much of the 1980s. Grant and Wagner had developed the strip into the most popular in "2000AD" as well as creating lengthy epic storylines such as "The Apocalypse War".

Grant also wrote for other IPC comics such as the revamped "Eagle".

By the late 1980s, Grant and Wagner were about to move into the American comic market. Their first title was a 12-issue called "Outcasts" for . Although it wasn't a success, it paved the way for the pair to write stories in "" from issue 583, largely with on art duties across the various Batman titles Grant moved to. After a dozen issues, Wagner left Grant as sole writer. Grant was one of the main Batman writers until the late 1990s. He has long stated that Wagner left after five issues because the title did not sell well enough to give them royalties, and that Wagner's name was kept in the credits for the remaining seven issues because Grant was afraid DC would fire him.

The pair also created a four issue series for called "". This series, as well as the "Chopper" storyline in "Judge Dredd", is blamed for the breakup of the Wagner/Grant partnership. The pair split strips, with Wagner keeping "Judge Dredd" and Grant keeping "Strontium Dog" and "". Grant and Wagner continue to work together on special projects such as the Batman/Judge Dredd crossover "".

During the late 1980s, Grant experienced a philosophical transformation and declared himself an anarchist. The creation of the was initially intended as a vehicle for exploring his political opinions through the comic medium. In the following years, he would continue to utilize the character in a similar fashion as his philosophy evolved.

Grant's projects at the start of this decade included writing "Detective Comics" and "Strontium Dog", but two projects in particular are especially notable. The first is "", a series co-written by Wagner which was the pair's first venture into independent publishing. The second is "Lobo", a character created by as a supporting character in "".

"Lobo" gained his own four issue mini series in 1990 which was drawn by . This was a parody of the 'dark, gritty' comics of the time and proved hugely popular. After several other miniseries (all written by Grant, sometimes with Giffen as co-writer), Lobo received his own ongoing series. Grant was also writing "" (a "" spin-off) and "" (a revival of 's character) for DC Comics. Grant also wrote the first issues of the new Batman title, ', which also saw him create three new characters, , and Amygdala. This story arc, ', was later accompanied by his role as one of the main writers during the "" crossover.

Grant was also part of the creative team for the short-lived weekly title "" and was a consultant on the "". Due to the sheer volume of work he was doing, Grant let a new generation of writers try their hand on strips like "Judge Dredd" and "Robo-Hunter". This often proved to be unsuccessful, however, and Grant found himself again writing for "2000AD".

In the mid 90's, Grant underwent a second philosophical transformation, declaring himself a follower of Neo-Tech, a philosophy created by . When he was given the opportunity to create an Anarky mini-series, he redesigned the character accordingly.

By the end of the decade Grant had written for virtually every American publisher of comic books, including DC, Marvel and Dark Horse.

Grant had become involved with writing scripts for animation as well as his comic work, notably working on "" cartoons as well as original . He remains the main writer for "Judge Anderson" and "Robo-hunter" and has teamed up with Wagner for a new "Bogie Man" story for the "Judge Dredd Megazine". He has also formed his own publishing company, Bad Press Ltd, which has so far only released the humour title "Shit the Dog", written by Grant and drawn by Simon Bisley.

He is one of the few professional comics writers to contribute to s such as "". He partly owns and provides scripts for "Northern Lightz", a Scottish underground comic. Along with his wife Sue, he organises the annual Comics Festival.

Grant has written two comic-based novels, "The Stone King," (2001) featuring and the , and "Last Sons," (2006) featuring , and Lobo. Since 1998, Alan has written scripts for Renga Media and now is writing the screenplay for "Dominator X".

He has also written "Kidnapped", an adaptation of the novel of the same name by , with art by , published by Waverley Books. It is part of a project revolving around being the first in 2007 and various editions will be produced some of which will be handed out for free. [ [http://www.cityofliterature.com/projects.aspx?sec=6&pid=30&item=325 Edinburgh UNESCO City of Literature: Projects ] ] A version with text adapted for reluctant readers will be published simultaneously by , and a Scots language translation by called "Kidnappit" is published by Itchy Coo. [ [http://www.itchy-coo.com/booktitles/kidnappit.html Kidnappit product page on Itchy-Coo website] ] If things go well more adaptations may be in the works, [ [http://www.comicbookresources.com/columns/index.cgi?column=litg&article=2635 Comic Book Resources - Comic Book News, Reviews and Commentary - Updated Daily! ] ] although a sequel project based on "" was commissioned due to the relatively high profile and warm reception of the "Kidnapped" adaptation. It is being promoted as part of the One Book - One Edinburgh 2008 campaign. [ [http://www.cityofliterature.com/ecol.aspx?sec=6&pid=212&item=448 Strange Case of Dr Jekyll and Mr Hyde at One Book - One Edinburgh 2008] ]

Alan Grant has written many comics of various publishing houses, mostly expressing themes. Much of his work for the comic series was informed by his political leanings. Select writings also acted as vehicles for his personal meditations on philosophy, including the 1997 and 1999 "Anarky" series. He has also written scripts for television and film, and two novels for DC Comics.