A desktop environment is a collection of software designed to give functionality and a certain look and feel to an operating system.

This article applies to operating systems which are capable of running the X Window System, mostly Unix and Unix-like operating systems such as Linux, Solaris, FreeBSD, and Mac OS X.[1] Microsoft Windows is incapable of natively running X applications; however, third-party X servers like Cygwin/X or Xming are available.[2][3]

Technical elements of a desktop environment

A desktop environment (DE) can be broken up into several components that function independently and interact with one another to provide the look and feel and functionality of the desktop environment. A fundamental part of a DE is the window manager or WM. A window manager creates a certain way for application windows to present themselves to the user. It manages the various application windows, keeping track of which ones are open and providing features to switch between them. Another important element of a DE is the file manager. This application manages files/ folders and presents them in a way that the user finds convenient. It provides file operations like viewing, copying or moving, changing permissions and deleting. DEs usually provide utilities to set wallpapers and screensavers, display icons on the desktop, and perform some administrative tasks. They may optionally include word processors, CD/DVD writing applications, web browsers and e-mail clients.

Some exceptions must be noted here. Window managers like Fluxbox, wmii and Ratpoison operate independently of a desktop environment and were written with this objective in mind. Additional hand-picked applications add functionality such as a panel and volume management which gives them some of the qualities of a full DE. This contrasts the behaviour of WMs like Metacity and KWin which were not written with the objective of operating independently of a DE.

KDE Software Compilation and GNOME are written almost completely on special software libraries Qt and GTK+ respectively.[4] This usually means that virtually every component of the desktop environment including the file manager explicitly depends on that library for its functioning. 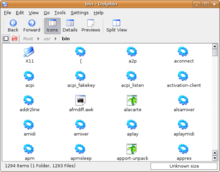 Notably, nothing prevents the user from installing any number of software libraries of his/her choice. In practice, software written on major libraries can be run under any desktop environment. Running a package designed for one desktop (which essentially means that it's written using the same libraries as the desktop itself is) within a different desktop can be visually displeasing, as well as incurring the RAM penalty of loading libraries that wouldn't otherwise be required.

Some of the differences which can influence the choice of desktop environment are:

This table shows basic information on the programs distributed with some desktop environments for the X Window System:

Comparison of ease of use and stability

GNOME's graphical file manager Nautilus is intended to be very easy to use and has many features, which make it easy for new Linux users to pick up without reading any documentation.[9] KDE's Konqueror is also intended to be very easy for novices to use, both as a file manager and as a web browser.[10] However, in both cases this ease of use comes at a price, since both Nautilus and Konqueror are noticeably slower than lighter weight file managers on older hardware. Some users also object to dual functionality (both local file browser and remote client) in browsers such as Konqueror, fearing potential security vulnerabilities, and preferring a more minimalist approach. Both GNOME and KDE come with many graphical configuration tools, reducing the need to manually edit configuration files for new users. They have extensive bundled software such as graphical menu editors, text editors, audio players, and software for doing administrative work. All applications installed in most distributions are automatically added to the GNOME and KDE menus. No major configuration changes are necessary to begin working. However, by using graphical tools, the extent to which the desktops can be configured is determined by the power provided by those tools.

Blackbox, Fluxbox, Openbox, Ratpoison, Ion and wmii require users to edit configuration files by hand to configure virtually every aspect of the desktop environment and are hence highly configurable. A new user, however, may feel uncomfortable without any graphical tools. These window managers also do not provide any additional software like file managers, text editors or web browsers, leaving it up to their users to decide upon the software they prefer.[11]