Dutch colonization of the Americas

Dutch colonization of the Americas

Dutch trading posts and plantations in the Americas precede the much wider known colonization activities of the Dutch in Asia. Whereas the first Dutch fort in Asia was built in 1600 (in present-day Indonesia), the first forts and settlements on the Essequibo river in Guyana and on the Amazon date from the 1590s. Actual colonization, with Dutch settling in the new lands, was not as common as with other European nations. Many of the Dutch settlements were lost or abandoned by the end of that century, but the Netherlands managed to retain possession of Suriname until it gained independence in 1975, as well as the Netherlands Antilles and Aruba, which remain within the Kingdom of the Netherlands today.

Dutch colonization in the Caribbean started in the 1620s on St. Croix and Tobago (1628), followed in 1631 with settlements on Tortuga (now Île Tortue) and Sint Maarten. When the Dutch lost Sint Maarten (and Anguilla where they had built a fort shortly after arriving in Sint Maarten) to the Spanish, they settled Curaçao and Sint Eustatius. They regained half of Sint Maarten in 1648, from then on sharing the island with France. The border between the two portions of the island continued to be modified periodically, before being set for good in 1816.

Several other islands were captured and fortified to prevent Spanish attacks in the ongoing Dutch war for independence from Spain and to exploit timber and salt resources: zfs,mh;xbm;

Until deep into the 19th century, the now Venezuelan islands of Aves, the Aves archipelago, Los Roques and La Orchila were also considered by the Dutch government to be part of the Dutch West Indies.

The Netherlands made numerous attempts to colonize the island in the 17th century. Each time, the settlements were destroyed by rival European powers. Dutch settlements on Tobago existed: 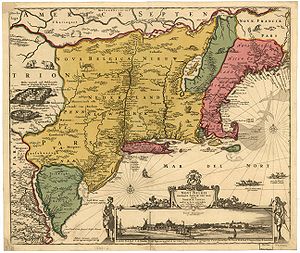 1685 reprint of a 1656 map of the Dutch North American colonies showing extent of Dutch claims, from Chesapeake Bay and the Susquehanna River in the South and West, to Narragansett Bay and the Providence-Blackstone Rivers in the East, to the St. Lawrence River in the North
Main articles: New Netherland, New Amsterdam, and Dutch Acadie

In 1602, the government of the Republic of the Seven United Netherlands chartered the Dutch East India Company (Vereenigde Oostindische Compagnie), or VOC with the mission of exploring it for a passage to the Indies and claiming any uncharted areas for the United Provinces, which led to several significant expeditions. The two Dutch settlements in the Americas are, New Netherlands and New Amsterdam.

In 1609, the VOC commissioned English explorer Henry Hudson who, in an attempt to find the so-called northwest passage to the Indies, discovered and claimed for the VOC parts of the present-day United States and Canada. In the belief that it was the best route to explore, Hudson entered the Upper New York Bay sailing up the Hudson River which now bears his name. In 1614, Adriaen Block led an expedition to the lower Hudson in the Tyger, and then explored the East River aboard the Onrust, becoming the first known European to navigate the Hellegat enter Long Island Sound. Block Island and its sound were named after him. Upon returning, Block compiled a map, the first to apply the name "New Netherland" to the area between English Virginia and French Canada, where he was later granted exclusive trading rights by the Dutch government. 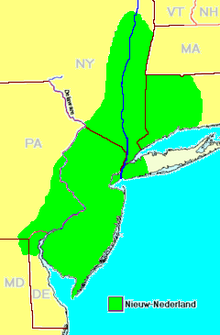 After some early trading expeditions, the first Dutch settlement in the Americas was founded in 1615: Fort Nassau, on Castle Island in the Hudson, near present-day Albany. The settlement served mostly as a trade post for fur trade with the natives and was later replaced by Fort Oranje (in English: Fort Orange) at present-day Albany. Both forts were named in honor of the Dutch House of Orange-Nassau.

In 1621, a new company was established with a trading monopoly in the Americas and West Africa: the Dutch West India Company (Westindische Compagnie or WIC). The WIC sought recognition for the area in the New World – which had been called New Netherland – as a province, which was granted in 1623. Soon after, the first colonists, mostly from present-day Belgium and Germany, arrived in the new province. That same year the construction of several fortified trading posts began including the Fort Huys de Goede Hoop (in English, Fort House of Good Hope), now known as Hartford, Connecticut.

In 1626, Director-General of the WIC Peter Minuit purchased the island of Manhattan from Indians and started the construction of fort New Amsterdam. In the same year, another Fort Nassau (not the one near Albany) was built on the Delaware River in southern New Jersey. Other settlements were Fort Casimir (Newcastle) and Fort Beversrede (Philadelphia). Fort Huys de Goede Hoop was completed in 1633. By 1636, the English from Newtown now known as Cambridge, Massachusetts settled on the north side of the Little River, now buried under the Whitehead Highway of Hartford. By 1653, the English had overtaken this Dutch trading post. In 1655, the main settlement of New Sweden, Fort Christina, was captured after the Swedes had briefly occupied Fort Casimir.

Many of the inhabitants of these settlements were not ethnically Dutch, but came from a variety of other European countries. A significant number of immigrants to New Netherland were Protestants of English or French Huguenot background, including the Louis Dubois colony, which settled New Paltz, making a private treaty with the local Native Americans to purchase a large tract of land from the Hudson River to the mountains. Later, under English rule, this self-governing colony, ruled by Dubois and 11 others on their unique duzine, continued to prosper and today the village boasts the oldest street in North America with the original stone houses.

The loss of the New Netherland province led to the Second Anglo–Dutch War during 1665–1667. This conflict ended with the Treaty of Breda in which the Dutch gave up their claim to New Netherland in exchange for Suriname.

From 1673 to 1674, the territories were once again briefly captured by the Dutch in the Third Anglo–Dutch War, only to be returned to England at the Treaty of Westminster. In 1674, Dutch navy captain Jurriaen Aernoutsz also briefly captured two forts in the French colony of Acadia, which he claimed as the Dutch territory of New Holland. However, Aernoutsz's appointed administrator, John Rhoades, quickly lost control of the territory after Aernoutsz himself left for Curaçao to seek out new settlers, and with effective control of Acadia remaining in the hands of France, Dutch sovereignty existed only on paper until the Netherlands surrendered their claim in the Treaties of Nijmegen. 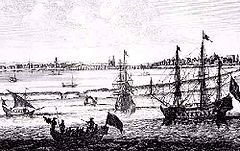 Recife or Mauritsstad - Capital of the Nieuw Holland in Brazil

From 1630 onward, the Dutch Republic came to control a large portion of Brazil. The Dutch West India Company set up their headquarters in Recife. The governor, Johan Maurits invited artists and scientists to the colony to help to promote migration to the new South American colony. However, the Portuguese won a significant victory at the Second Battle of Guararapes in 1649. On January 26, 1654, the Dutch Republic surrendered and signed the capitulation returning control of all North East Brazilian land to the Portuguese. After the end of the First Anglo–Dutch War in May 1654, the Dutch Republic demanded that New Holland (Dutch Brazil) was given back to them. Under threat of an occupation of Lisbon and a reoccupation of North East Brazil, the Portuguese being already involved in a war against Spain acceded to the demand of the Dutch. However, the new Dutch political leader Johan de Witt deemed commerce more important than territory, and saw to it that New Holland was sold back to Portugal on August 6, 1661 through the Treaty of the Hague.[1]

In 1600 , the Chilean city of Valdivia was conquered by Dutch pirate Sebastian de Cordes.[2] He left the city after some months. Then in 1642 the VOC and the WIC sent a fleet of some ships to Chile to conquer the city of Valdivia and the goldmines of the Spanish.[3] The expedition was conducted by Hendrik Brouwer, a Dutch general. In 1643 Brouwer conquered the Chiloé Archipelago and the city of Valdivia.[4] Brouwer died on the 7th of August of 1643, and the vice-general Elias Herckmans took control.

The second emigration from the Netherlands to Chile was in 1895. The so-called "Inspector General of Colonization and Immigration Chilean" a dozen Dutch families settled between 1895 and 1897 in Chiloé, particularly in Mechaico, Huillinco and Chacao. In the same period Hageman Egbert arrived in Chile.[5] with his family, 14 April 1896, settling in Rio Gato, near Puerto Montt. In addition, family Wennekool which inaugurated the Dutch colonization of Villarrica.[6]

In the early twentieth century, there arrived in Chile a large group of Dutch people from South Africa, which had been established where they worked mainly in construction of the railway. When the Boer War, which would eventually lead to the British annexation of both republics in 1902. These emigrants decided to emigrate to Chile with the help of the Chilean government.

On 4 May 1903, a group of over 200 Dutch emigrants sailed on the steamship "Oropesa" shipping company "Pacific Steam Navigation Company, from La Rochelle (La Pallice) in France. The majority of migrants were born in the Netherlands: 35% was from North Holland and South Holland, 13% of North Brabant, 9% of Zealand and equal number of Gelderland.

On June 5, arrived by train to their final destination, the city of Pitrufquén, located south of Temuco, near the hamlet of Donguil. Another group of Dutchmen arrived shortly after to Talcahuano, in the "Oravi" and the "Orissa". The Netherlands colony in Donguil was christened "New Transvaal Colony. There were established more than 500 families in order to start a new life. Between 7 February 1907 and February 18, 1909 above the last group of families Boers.

It is currently estimated at about 50,000 descendants of Dutch, mostly located in Malleco, Gorbea, Pitrufquén, Faja Maisan and around Temuco.[7][8]

The Dutch West Indian Company built a fort in 1616 on the Essequibo River. The Dutch traded with the Indian peoples and, as in Suriname, established sugar plantations worked by African slaves. While the coast remained under Dutch control, the English established plantations west of the Suriname River. Conflict between the two countries meant parts of the region changed hands a number of times, but by 1796 Britain had control of the region. The Netherlands ceded the colonies of Essequibo, Demerara, and Berbice to Britain in 1814.

The European colony in Suriname was founded in the 1650s by Lord Willoughby, the governor of Barbados. This colony was captured by the Dutch under Abraham Crijnsen during the Second Anglo–Dutch War. On July 31, 1667, under the Treaty of Breda the Dutch offered New Netherland (including New Amsterdam, modern-day New York City) in exchange for their sugar factories on the coast of Surinam. In 1683 Suriname was sold to the Dutch West India Company and came to be known as Dutch Guiana. The colony developed an agricultural economy based on African slavery. During the Napoleonic Wars, England controlled Suriname from 1799 until 1816, when it was returned to the Dutch. The Netherlands abolished slavery in 1863 and imported indentured labour force from the British Indian colonies and from the Dutch East Indies to keep the economy going. Internal self governance was granted in 1954 and full independence in 1975. The prospect of independence prompted many to migrate to the Netherlands, especially from the large Hindustani minority. Political instability and economic decline after independence resulted in even more migration to the Netherlands and also to the USA. The Surinamese community in the Netherlands is now almost as large as the population in the country itself (about 450,000).