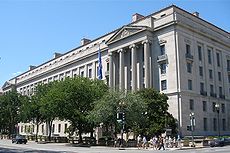 The United States Department of Justice (often referred to as the Justice Department or DOJ), is the United States federal executive department responsible for the enforcement of the law and administration of justice, equivalent to the justice or interior ministries of other countries.

The Attorney General was initially a one-person, part-time job, established by the Judiciary Act of 1789, but this grew with the bureaucracy. At one time the Attorney General gave legal advice to the U.S. Congress as well as the President, but this had stopped by 1819 on account of the workload involved.[citation needed]

In 1867, the U.S. House Committee on the Judiciary, led by Congressman William Lawrence, conducted an inquiry into the creation of a "law department" headed by the Attorney General and composed of the various department solicitors and United States attorneys. On February 19, 1868, Lawrence introduced a bill in Congress to create the Department of Justice. This first bill was unsuccessful, however, as Lawrence could not devote enough time to ensure its passage owing to his occupation with the impeachment of President Andrew Johnson.[citation needed]

A second bill was introduced to Congress by Rhode Island Representative Thomas Jenckes on February 25, 1870, and both the Senate and House passed the bill.[citation needed] President Ulysses S. Grant then signed the bill into law on June 22, 1870. The Department of Justice officially began operations on July 1, 1870.[citation needed]

The "Act to Establish the Department of Justice" bill did little to change the Attorney General's responsibilities, and his salary and tenure remained the same.[1] The law did create a new office, that of Solicitor General, to supervise and conduct government litigation in the Supreme Court of the United States.[citation needed]

With the passage of the Interstate Commerce Act in 1887, the federal government began to take on some law enforcement responsibilities, with the Department of Justice tasked to carry out these duties.[2]

In 1884, control of federal prisons was transferred to the new department, from the Department of Interior. New facilities were built, including the penitentiary at Leavenworth in 1895, and a facility for women located in West Virginia, at Alderson was established in 1924.[3]

By 2008 a small number of current and former assistant U.S. attorneys were alleged to have engaged in criminal conduct including sexual battery,[4] sexual abuse of children,[5] and failures to make mandatory conflict of interest disclosures.[6]

2010 Operation "Fast & Furious" came to light. This was a gun selling, gun trafficking (to Mexico and other countries)and drug trafficking (Mexico into the US with cocaine) operation run thru the Bureau of Alcohol, Tobacco, Firearms, and Explosives (ATF) and overseen by the DOJ. A separate Office of Professional Responsibility (OPR) within the DOJ is responsible for investigating attorney employees of the DOJ who have been accused of misconduct or criminal activity with respect to their professional functions as DOJ attorneys. Former U.S. Attorney General John D. Ashcroft acknowledged challenges facing the Department of Justice:

In the real world of limited resources, we know that we can only detect, investigate and prosecute a small percentage of those officials who are corrupt.[7]

I remain convinced that there is no more important area in the fight against corruption than the challenge for us within the law enforcement and justice sectors to keep our own houses clean.[8]

In 2011, they made more than 110 arrests of the American Mafia. It is the biggest attack on the mafia ever.[citation needed]

On April 15, 2011, the Department of Justice shut down the three biggest on-line poker networks (Pokerstars, Full Tilt, Ultimate Bet) and froze billions of dollars of assets owned by the players on the sites without warning or options to cash-out.

The U.S. Department of Justice building was completed in 1935 from a design by Milton Bennett Medary. Upon Medary's death in 1929, the other partners of his Philadelphia firm Zantzinger, Borie and Medary took over the project. On a lot bordered by Constitution and Pennsylvania Avenues and Ninth and Tenth Streets, Northwest, it holds over one million square feet of space. The sculptor C. Paul Jennewein served as overall design consultant for the entire building, contributing more than 50 separate sculptural elements inside and outside.

Various efforts, none entirely successful, have been made to determine the meaning of the Latin motto appearing on the Department of Justice seal, Qui Pro Domina Justitia Sequitur. It is not even known exactly when the original version of the DOJ seal itself was adopted, or when the motto first appeared on the seal. The most authoritative opinion of the DOJ suggests that the motto refers to the Attorney General (and thus to the Department of Justice) "who prosecutes on behalf of justice (or the Lady Justice)"

The building was renamed in honor of former Attorney General Robert F. Kennedy in 2001. It is sometimes referred to as "Main Justice."[9]

Several federal law enforcement agencies are administered by the Department of Justice:

Other offices and programs

In 2003, the Department of Justice created LifeAndLiberty.gov, a website that supported the PATRIOT ACT. It was criticized by government watchdog groups.[10]

Recently, the department became embroiled in a scandal for spending $121,000,000 on extravagant conferences that included $16 muffins and $8 beverages. [11] The Justice Department was authorized a budget for Fiscal Year 2010 of $27.7 billion and was authorized 111,993 positions. The budget authorization is broken down as follows:[12]