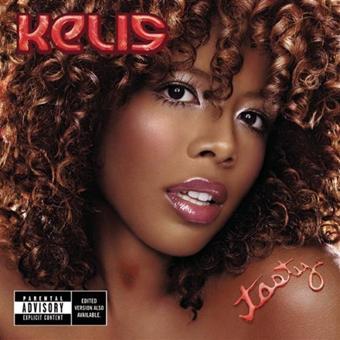 "Tasty" is the third by American R&B singer , released in December 2003 (see ). Considered the breakthrough of Kelis' career, she was able to expand her success across reaching new markets in , , and . Kelis was also finally able to do well in the American market. Unlike her previous albums, "Tasty" opted for a more pop/alternative-oriented tune which led to a greater success outside Europe with "Milkshake" being the first single from Kelis to receive critical acclaim in the U.S. and a peak position of number three on the "Billboard" Hot 100. It was known for being Kelis' breakout album and being a spinoff in Europe.

The singles and the album immediately found success in Europe. The album's second single, "Trick Me", once again proved successful on radio and music video channels in Europe, and went to the top ten in many European countries during mid-2004. However, the song did not enjoy success in America, where its music video was not released. This was due to the fact that her American label folded at the same time that "Tasty" was released. Kelis was then transferred to , who were not interested in continuing with the album.

The success of "Tasty" was most obvious in the . The four singles from the album were released. After "Milkshake" and "Trick Me" came "Millionaire" and "". Her European label, Virgin Records, who she had been with since the start of her career there, decided to persist with the album. Due to her various splits with U.S. labels, promotion for both of her previous projects "Kaleidoscope" and "" were ended prematurely, just as she was finally breaking through in the UK. Virgin UK did not want her to lose the fan base that she was building up yet again by ending promotion early, because of the U.S. and other territories deciding not to continue with the album. This paid off and Kelis finally cemented her UK status, with four top twenty hits from the album (including three top three hits) and "Tasty" going platinum there.

In the week of September 24, 2006, three years later after its release, "Tasty" re-entered the albums chart in the UK at number sixty-four—surprisingly, it even got to number three on the UK R&B Albums Chart the week of October 1—while her latest album, "", had fallen off the chart the same week.