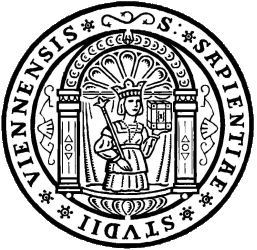 The University of Vienna ( _de. Universität Wien) is a located in , . Having opened in , it is one of the oldest universities in Europe. It offers more than 130 courses of study and has an attendance of more than 72,000 students. Its unofficial name among many Austrians is "Hauptuni" ( _en. "Main Uni").

In 1365, Rudolph IV sanctioned a deed of foundation for a doctoral-level university in Vienna, modelled on the . However, did not ratify the deed, specifically in relation to the department of , presumably due to pressure exerted by , who wished to avoid competition for the . Approval was finally received from the Pope in 1384 and the University of Vienna was granted the status of a full university, including the theology department. The first university building opened in 1385.

The current main building on the was built between 1877 and 1884 by . The previous main building was located close to the "Stuben" Gate (Stubentor) on Iganz Seipel Square, current home of the old University Church ("Universitätskirche") and the ("Österreichische Akademie der Wissenschaften"). Women were admitted as full students from 1897, although their studies were limited to philosophy. The remaining departments gradually followed suit, although with considerable delay: in 1900, in 1919, Protestant theology in 1923 and finally Roman Catholic theology in 1946. Eight years after the admission of the first female students, became the first woman to receive "", becoming professor of Romance Languages in 1905; she was also the first female distinguished professor. The first female chair of the university was not awarded until after , to physicist Berta Karlik.

The University of Vienna, like all universities and academies in Austria, once featured a novel system of democratic representation. Power in the university was divided equally among three groups: students (the largest group), junior faculty and full professors. All groups had the right to send representatives to boards, who then voted on almost every issue. While this system guaranteed that all groups had equal opportunity to introduce change, some people have arguedWho|date=July 2007 that it led to corruption, especially in the nomination of persons into prestigious positions.

The former government, headed by then-chancellor , reformed the university system so that power is now concentrated with the full professors. The reform also introduced a board of governors and tuition fees (about €367 per semester in 2007). The reforms also separated the medical departments into separate medical schools, such as the .

The research and teaching activity of the university is undertaken by some 6,200 scholars. Of these, approximately 980 are active in projects financed by third parties.

The University Library of the University of Vienna comprises of the Main Library and the 50 departmental libraries at the various university locations throughout . The library's primary responsibility is to the members of the university; however, the library's 350 staff members also provide access to the public. Use of the books in the reading halls is open to all persons without the need for identification, which is only required for checking out books. The library's website provides direct access to information such as electronic journals, online indices and databases.

Rudolph IV, in the Foundation Deed of 12th March 1365, had already provided for a "publica libraria", where the valuable books bequeathed by deceased members of the University should be collected. Through many legacies, this collection was subsequently greatly increased and became the basis of the old "Libreye" that was accommodated in the same building as the student infirmary. In addition, there were libraries in the separate Faculties and in the Duke's College.

From the 17th Century, interest in the old library, with its manuscripts and incunabulae, went into decline and the modern library in the Jesuit College came to the fore. In 1756, the oldest university library was finally closed down and its books, 2787 volumes, were incorporated into the Court Library, of which was then director. After the dissolution of the Jesuit order (1773), the new "Academic Library" was created out of the book collections of the five Lower Austrian Colleges and a large number of duplicates from the Court Library. This was opened on 13th May, 1777, the birthday of , in the building of the Academic College. Initially, the stock consisted of some 45,000 books and during Emperor Joseph II's dissolution of the monasteries, this was soon considerably extended. In contrast to its antecedents, the new library was open to the general public. Between 1827 and 1829, it acquired the classicist extension (Postgasse 9) to the Academic College, in which it was to be accommodated until 1884. In this year, the main library, with some 300,000 books, moved to Heinrich von Ferstel's new Main Building on the Ring, where stacks for some 500,000 volumes had already been prepared. With an annual growth of up to 30,000 volumes, the surplus space was soon filled. Book storage space had to be extended continuously. One hundred years later, the complete library, including departmental and subject libraries, comprised more than 4.3 million volumes. Today, Vienna's University Library is the largest collection of books in , with the greatest problems of space. In addition to the Main Library, which alone has to cope with an annual growth of 40,000 volumes, it includes today, three Faculty Libraries, 32 Subject Libraries and 26 Departmental Libraries. [cite web |url=http://www.univie.ac.at/archiv/tour/12.htm |title=An Historical Tour of the University of Vienna |accessdate=2008-09-29 |work=The University Library |publisher=University of Vienna Archives |date= ]