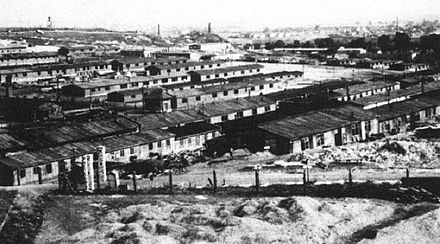 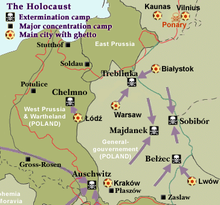 The Płaszów (Polish pronunciation: [ˈpwaʂuf]) or Kraków-Płaszów concentration camp was a Nazi German labour and concentration camp built by the SS in Płaszów, a southern suburb of Kraków (now part of Podgórze district), soon after the German invasion of Poland and the subsequent creation of the General Government.[1][2]

The Płaszów camp, originally intended as a forced labour camp, was constructed on the grounds of two former Jewish cemeteries (see, New Jewish Cemetery) in the summer of 1942 during Nazi German occupation of Poland, with deportations of the Jews from the Kraków Ghetto beginning October 28, 1942.[3] In 1943 the camp was expanded and turned into one of many KL concentration camps.

Commanding the camp was Amon Göth, an SS commandant from Vienna who was known for being uncommonly sadistic in his treatment and killing of prisoners.[2] Göth would never sit down to a breakfast without shooting at least one victim.[3] On March 13, 1943, he personally oversaw the liquidation of the Kraków Ghetto nearby, forcing its Jewish inhabitants deemed capable of work into the KL Plaszow camp. Those who were declared unfit for work were either sent to Auschwitz or shot on the spot. Under him were his staff of Ukrainian SS personnel, followed by 600 Germans of the SS-Totenkopfverbände (1943–1944),[4] and a few SS women, including Gertrud Heise, Luise Danz, Alice Orlowski and Anna Gerwing.

The camp was a slave Arbeitslager (English: Labor Camp), supplying manpower to several armament factories and a stone quarry. The death rate in the camp was very high. Many prisoners, including many children and women, died of typhus, starvation and executions. Płaszów camp became particularly infamous for both individual and mass shootings carried out there. Using Hujowa Górka, a large hill close to the camp commonly used for executions, some 8,000 deaths took place outside the camp’s fences with prisoners trucked in 3 to 4 times weekly. The covered lorries from Kraków used to arrive in the morning. The condemned were walked into a trench of the Hujowa Górka hillside and shot, bodies then covered with dirt layer upon layer. In early 1944 all corpses were exhumed and burnt in a heap to hide the evidence. Witnesses later attested that 17 truckloads of human ashes were removed from the burning site, and scattered over the area.[5] 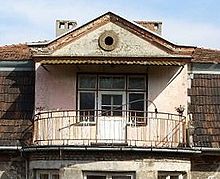 Amon Göth's house in Płaszów (2008); from this balcony, he would shoot at prisoners from the camp, working below.[3]

All documents pertaining to the mass killings and executions were entrusted by commandant Göth to a high ranking female member of the SS, Kommandoführerin Alice Orlowski. She held these documents in her possession until the end of the war, then allegedly destroyed them. Alice Orlowski, a picture-perfect SS-woman, was known for her whippings especially of young women across their eyes. At roll call she would walk through the lines of women, and personally whip them.[6] 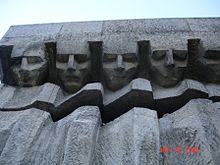 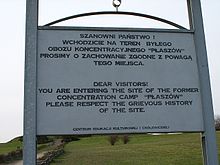 The sign at the entrance to the Płaszów camp memorial area

During July and August 1944 a number of transports of prisoners left KL Plaszow for Auschwitz, Stutthof, Flossenbürg, Mauthausen and other camps. In January 1945, the last of the remaining inmates and camp staff, left the camp on a death march to Auschwitz, including several female SS guards. Many of those who survived the march were killed upon arrival. When the Nazis realized that the Soviets were already approaching Kraków, they completely dismantled the camp, leaving an empty field in its place. The bodies that were buried there earlier in various mass graves were all exhumed and burned on site. On January 20, 1945 the Red Army had reached only a tract of barren land.[5]

The area which held the camp now consists of sparsely wooded hills and fields with one large memorial marking where the camp once stood, with an additional small plaque located near the opposite end of the site. The camp is featured in the movie Schindler's List about the life of Oskar Schindler.