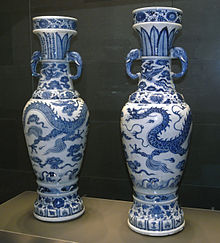 The David Vases, said to be two of the best-known Chinese porcelains in the world.

The Percival David Foundation of Chinese Art is a collection of Chinese ceramics and related items in London, England. The Foundation's main purpose is to promote the study and teaching of Chinese art and culture. The Collection consists of some 1,700 pieces of Song, Yuan, Ming and Qing porcelain from the 10th century to the 18th. It includes examples of the rare Ru and Guan wares and two important Yuan dynasty blue and white porcelain temple vases (the "David Vases") the oldest dated blue and white porcelain objects, from 1351.[1] It also holds a large library of Western and East Asian books related to Chinese art. In 1950 the Collection was presented to the University of London by the collector and scholar Sir Percival David. Today, the collection is on permanent display in the British Museum in London. 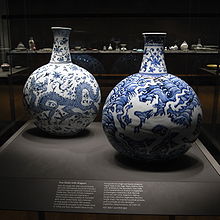 The collection dates back to 1927 when many of the items in the Forbidden City were being sold off by eunuchs and other members of the Imperial Household Department. The Dowager Empress is said to have used many items as collateral for loans from various Chinese banks in 1901. Sir Percival David convinced the officials to mount a display of many of the best items. When they started to come on the market, David managed to buy some forty pieces one way or the other and export them to the United States. In 1930, he again returned to China and helped with various exhibitions and produced a series of catalogues of the pieces. He also managed to acquire more items through various dealers in Beijing. This means that many pieces were once owned by the Qing Emperors and several pieces have inscriptions added by the orders of the Emperor Qianlong (1736–95).

In 1931, David's collection was displayed in the Dorchester Hotel in London. It remained there until it was evacuated to the countryside during World War II. Sir Percival David also created a Chair in Chinese Art and Architecture with the Courtauld Institute of Art, which is part of the University of London. Towards the end of his life he was determined to keep the collection together and to this end entered negotiations with the University of London. An agreement was reached to keep the collection and the library together in a Foundation attached to SOAS. The Chair that David had created was also moved to SOAS. Just before the opening of the Collection, the Foundation was also given a small collection of porcelain belonging to Mountstuart Elphinstone. The Collection was opened to the public on 10 June 1952 in a house in Gordon Square, Bloomsbury.

The Foundation has been a generous lender to other countries. It lent many items of Yuan Dynasty porcellain to Venice's 700 anniversary celebration of Marco Polo's expedition. It has also sent other items to places as far away as Japan and the United States.

The Library collection was a working library and as such was open to researchers from around the world.

Due to a funding crisis, the Gordon Square building housing the Foundation's collection closed at the end of 2007. The ceramics collection has been loaned on a long-term basis to the British Museum, where the whole collection, about 1,700 objects, are on permanent public display in a specially designed new gallery (Room 95, British Museum) opened in April 2009, thanks to the generosity of Sir Joseph Hotung.[2] The public gallery is part of the Sir Joseph Hotung Centre for Ceramic Studies, which will include facilities to use the collection for teaching.[3]

Chinese Ceramics: Highlights of the Sir Percival David Collection, by Regina Krahl and Jessica Harrison-Hall, was published in April 2009 by the British Museum Press to coincide with the opening of the new display.