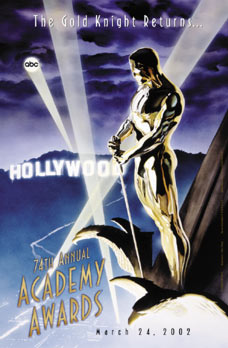 The 74th Academy Awards, honoring the best in film for 2001, were held on , for the first time at the in Hollywood, California. They were hosted by . The ceremony was historically notable for honoring two African American actors for their Leading Roles. Laura Ziskin ("Spider-Man" producer) was executive producer for the first time making her the first woman to solo produce the telecast. She also produced the 2007 telecast. The telecast, which was shown in the on ABC, is currently the longest to date.

Best Actor in a Leading Role

Best Actress in a Leading Role

Best Actor in a Supporting Role

Best Actress in a Supporting Role

The 74th Academy Awards ceremony was significant for a number of reasons. It saw the return of the Academy Awards celebrations to Hollywood, after more than forty years away, taking place at the brand new . As a result of the new facility, the ceremony was the first to be telecasted to domestic audience on ABC in due the vast capacity for HDTV equipment that the Kodak Theatre could utilize. Instead of a typical scenery, HD screens were used throughout the ceremony much similar to the technologically ambitious design at the (that was the first time an HD set was used). The visual graphics and idents were designed by (who designed graphics for several TV shows such as and movies such as Mission Impossible) using a "gold circles" motif consisting of gold circles that panned through the screen or rotated rapidly. The "gold circles" motif was designed in order for viewers at home to able to watch the ceremony in High Definition.

The Oscar ceremony had several young up and coming actors and actresses to present a few of the awards. Among them included Ryan Phillippe, Reese Witherspoon, Josh Hartnett, Kirsten Dunst and Tobey Maguire.

The ceremony drew its lowest ratings since 1996 with an estimated 40.54 million watching and 24.87 households watching.

Furthermore the tone of this show was quieted by the recent occurrence of the attacks on September 11. Just as the were postponed in , many wondered if the Oscars would be postponed as well. Frank Pierson, then president of the Academy stated that the Oscars would proceed as scheduled, and to postpone would mean that "". However, the red carpet festivities prior to the awards, though not canceled, were severely curtailed as now the availabity of the bleacher seats were determined by a lottery rather than the first come, first serve basis. Also, there were 26 references to the attacks during the telecast. [Giovanni, Joseph: "9/11 by the Numbers", "", 16 September 2002, page 54.]

made his first ever appearance at this year's Oscar ceremony to present a tribute to films shot in , in the wake of the on the .

There was a tribute to the popular scores for motion pictures in the past 74 years.

Documentary filmmaker , who would later win Best Documentary at the , made a [http://www.errolmorris.com/content/shortfilms/oscarmovie.html short film] that was shown during the ceremony. The film shows almost 100 people discussing movies. Those featured range from and to and to (1972 in ) to Morris' son Hamilton. Morris would again make a short film similar to this one except the subject being the 177 nominees of the five years later (also produced by Zinskin).

Entertainment during one segment of the ceremony was provided by . This was the first time a big lavish production was used since the (infamous for its / blunder).

Before the start of every commercial break (except the one after the "In Memoriam" tribute), famous people ranging from famous actors to athletes to politicians discussed their favorite movie moments.

The ceremony also saw both the Best Actor and Best Actress Oscars awarded to actors for the first time in Academy Award history; this, in addition to winning the Lifetime Achievement award, led some to dub the ceremony The Bloscars and the Blackademy Awards. However,some controversy was sparked after Denzel Washington's win. Russell Crowe was the front runner for the award, but the BAFTA controversy, turned the Academy voters against him.

, who at the time had the distinction of most nominations without winning, would finally break his curse and win the Oscar for Best Song for 's "". After receiving an enthusiastic standing ovation, a bemused but emotional Newman began [http://www.anecdotage.com/index.php?aid=16554 his acceptance speech] with "I don't want your pity!"

The 74th Academy Awards would be the first year that the award for Best Animated Feature was presented. According to the rules, at least three animated features have to be widely released in a particular year for the award to appear on the ballot.

*"Forty years I've been chasing Sidney, they finally give it to me. What do they do? They give it to him the same night." - upon accepting his Best Actor award, commenting on Sidney Poitier's Oscars.
*"For those of you keeping track, the score is Brilliant Mathematicians -2, Hobbits-4." - Whoopi Goldberg, mid-way through the evening, commenting on the race between the two Oscar front-runners that night, "A Beautiful Mind" and "". Both would end up splitting the number of wins.
*"I love my life." - , upon opening the Best Actor envelope and seeing the winner was friend Denzel Washington. Roberts was widely criticized for the comment, which was perceived as self-centered and an effort to make the moment "about her" rather than the winner. But this also be noted as Julia being "in the moment" due to the circumstances.

* served as the awards musical conductor, and in addition, conducted a tribute to the past musical scores from motion pictures.
* and performed "If I Didn't Have You" from .
* gave a guest performance.