The Tank, Cruiser, Mk II (A10), was developed alongside the A9, and was intended to be a heavier, infantry tank version of that type. In practice it was not deemed suitable for the infantry tank role and was classified as a "heavy cruiser".

The A10 was developed by Sir John Carden of Vickers in 1934 by adaptation of the A9 design. The two sub-turrets present on the A9 were removed, and extra armour bolted onto that already present on the front and sides of the hull, along with all faces of the turret, providing approximately twice the armor in most areas. The A10 was two tonnes heavier than the A9, but used the same 150 bhp engine, and as a consequence the tank's top speed was cut from 25 mph to 16 mph.

The turret armament consisted of a QF 2-pounder (40mm) gun and a coaxial .303 Vickers machine gun. There was a 7.92mm BESA machine gun mounted in the hull in a barbette to the right of the driver. This was added to give extra firepower but at the expense of simplicity - the Vickers and the BESA using different ammunition. The tank had a total crew of five (Commander, gunner, loader, driver and hull machine gunner), and there was no separation between the driver's compartment and the fighting compartments.

It used the same suspension and engine as the A9 and as a result it was slower than the A9. The A10 entered service in December 1939, but was something of an oddity - it had been intended to sacrifice speed for armour like an Infantry tank, but was still relatively poorly armoured, and was, as a result, not effective. Production was ordered in July 1938, Total production was 175 vehicles including the 30 CS versions (see below), 45 were built by Birmingham Railway Carriage and Wagon Company, 45 by Metropolitan-Cammell, 10 by Vickers. In late 1939 another order was placed with Birmingham Railway Carriage and Wagon Company, this time it was a larger order of 75 vehicles.

A British Cruiser Mk II disabled by having lost a track (seen lower right) in Greece, 1941.

A number of Mark IIs were part of the British Expeditionary Force (BEF) sent to France in the early stages of World War II. Their cross country performance was recorded as poor, but they were still used later in North Africa at the defence of Tobruk in 1941, where reliability and suspension performance in the desert conditions was praised. Sixty worn out examples were taken to Greece, by the 3rd Royal Tank Regiment and although they performed well against the German tanks, over 90% were lost due to mechanical breakdowns as opposed to enemy action (mainly tracks).[2][3]

Classified as a 'heavy cruiser' and 31 were sent to France with the 1st Armoured Division, but performed poorly in the following campaign. Also served in the North African Campaign until late in 1941. 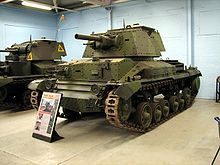 Had a 3.7" (94 mm) howitzer in the turret instead of the 2 pdr. The standard ammunition load was 40 rounds smoke, and a few HE shells. The CS denotes Close Support.

This weapon was derived from a World War I field howitzer. It was not related to the 3in howitzer used in later British tanks in World War II, which was itself replaced by a 95mm howitzer in the later versions of the Churchill infantry tanks and all CS versions of the Centaur and Cromwell cruiser tanks. There is a frequent and incorrect claim that the 3.7in CS gun only fired smoke shells due to reports that the A9 CS tanks that went to France only had smoke rounds.

Other vehicles based on chassis