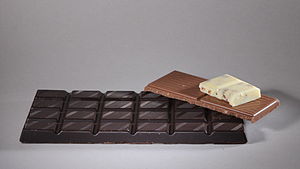 Chocolate most commonly comes in dark, milk, and white varieties, with cocoa solids contributing to the brown coloration.

Chocolate is a range of products derived from cocoa (cacao), mixed with fat (i.e. cocoa butter and/or plant oils) and finely powdered sugar to produce a solid confection. There are several types of chocolate according to the proportion of cocoa used in a particular formulation.

The use of particular name designations is sometimes subject to governmental regulation.

The cocoa bean products from which chocolate is made are known under different names in different parts of the world. In the American chocolate industry:

Chocolate is available in many types. Different forms and flavors of chocolate are produced by varying the quantities of the different ingredients. Other flavors can be obtained by varying the time and temperature when roasting the beans.

The U.S. Food and Drug Administration (FDA) regulates the naming and ingredients of cacao products:[7][8]

In March 2007, the Chocolate Manufacturers Association, whose members include Hershey's, Nestlé and Archer Daniels Midland, began lobbying the FDA to change the legal definition of chocolate to allow the substitution of "safe and suitable vegetable fats and oils" (including partially hydrogenated vegetable oils) for cocoa butter in addition to using "any sweetening agent" (including artificial sweeteners) and milk substitutes.[9] Currently, the FDA does not allow a product to be referred to as "chocolate" if the product contains any of these ingredients.[10]

In Japan, 'chocolate materials' and 'chocolate products' are classified on a complex scale (q.v. ja:チョコレート#チョコレートの規格).

Chocolate is a product based on cocoa solid and/or cocoa fat. The amount and types of cocoa solids and fat that the term implies is a matter of controversy. Manufacturers have an incentive to use the term for variations that are cheaper to produce, containing less cocoa and cocoa substitutes, although these variations might not taste as good.

There has been disagreement in the EU about the definition of chocolate; this dispute covers several ingredients, including the types of fat used, quantity of cocoa, and so on. But in 1999, the EU at least resolved the fat issue by allowing up to 5% of chocolate's content to be one of 5 alternatives to cocoa butter; illipe oil, palm oil, sal, shea butter, kokum gurgi, or mango kernel oil.[12]

A recent workaround by the US confection industry has been to reduce the amount of cocoa butter in candy bars without using vegetable fats by adding polyglycerol polyricinoleate (PGPR), which is an artificial castor oil-derived emulsifier that simulates the mouthfeel of fat. Up to 0.3% PGPR may be added to chocolate for this purpose.[13]