The word "kuna" means "marten" in Croatian since it is based on the use of marten pelts as units of value in medieval trading. The word lipa means "linden (lime) tree".

During Roman times, in the provinces of upper and lower Pannonia (today Hungary and Slavonia), taxes were collected in the then highly valued marten skins. Hence, the Croatian word "marturina" or tax, derived from the Latin word "martus" (Croatian: "kuna"). The kuna was a currency unit in several Slavic states, most notably Kievan Rus and its successors until the early 15th century. It was equal to 1⁄25 (later 1⁄50) gryvna of silver. It has no relation to the various Slavic currencies named "koruna" (translated as kruna in Croatian). In the Middle Ages, many foreign monies were used in Croatia, but since at least 1018 a local currency was in use. Between 1260 and 1380, the Croatian Viceroys were making a marten-adorned silver coin called the banovac.[2][3] However, the diminishing autonomy of Croatia within the Croatia-Hungarian Kingdom led to the gradual disappearance of that currency.

The idea of a kuna currency reappeared in 1939 when the Banovina of Croatia, established within the Yugoslav Monarchy, planned to issue its own money.[4] 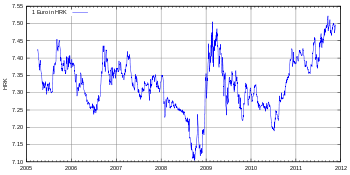 The choice of the name kuna was controversial because the same currency name had been used by the Independent State of Croatia kuna, but this was dismissed as a red herring, since the same name was in also in use during the Banovina of Croatia and by the ZAVNOH.[5] An alternative proposition for the name of the new currency was kruna (crown), divided into 100 banica (viceroy's wife), but this was deemed too similar to the Austro-Hungarian krone and found inappropriate for the country which is a republic.[5] The transition to the new currency went smoothly and the controversy quickly blew over.

The self-proclaimed Serbian entity Republic of Serbian Krajina did not use the kuna or the Croatian dinar. Instead, they issued their own Krajina dinar until the region was integrated back into Croatia in 1995.

The main reference currency for kuna was the German Mark, and later the Euro. A long-time policy of the Croatian National Bank has been to keep the fluctuations of the kuna exchange rate with the euro in a relatively stable range. The country has been on the path of accession to the European Union and it plans to join the European Monetary System.[7][8] Kuna is expected to be replaced by the euro within two or three years after joining the European Union.[8]

Due to their low value, 1 and 2 lipa coins are rarely used. Croatian National Bank has stated in 2001 that it had no plans for withdrawing the 1, 2 and 5 lipa coins.[9]

A number of commemorative designs have also been issued for circulation, see Commemorative coins of the Croatian kuna.