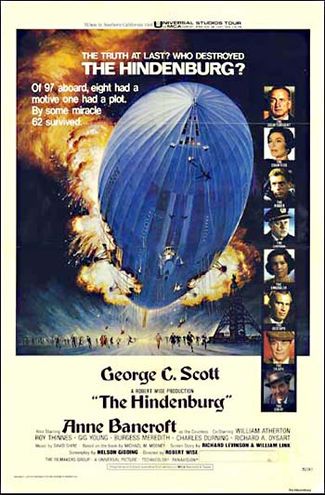 "The Hindenburg" (1975) is a movie based on the disaster of the German "Hindenburg". The film was produced and directed by , and was written by , and based on the book of the same name by Michael M. Mooney ("The Hindenburg" [1972] ). A.A. Hoehling, author of a previous book also about the sabotage theory, "Who Destroyed The Hindenburg?" (1962) sued Mooney along with the film developers for as well as unfair competition. However, Judge Charles M. Metzner dismissed his allegations. [ [http://www.law.uconn.edu/homes/swilf/ip/cases/hoehling.htm Hoehling] ]

A highly speculative thriller, "The Hindenburg" depicts a conspiracy leading to the destruction of the airship. In reality, while the s were certainly used as a symbol by the , and anti-Nazi forces might have had the motivation for , the theory of sabotage was investigated at the time and no firm evidence for such sabotage was ever put forward. The possibility of Boerth's (i.e. Spehl's) deliberate sabotage is one theory of the fire that had been the subject of Mooney's book, published around the time of the film's development. It has never been proven definitively. Although sabotage may be only a theory to the disaster, the sequence in the beginning about a bomb threat from a Kathie Rauch of , , is fact. [ [http://www.solarnavigator.net/history/hindenburg_zeppelin_disaster.htm Hindenburg Zeppelin Disaster] ]

An interesting aspect of the film was its transition from to and back to with the film beginning with a that gave a lighthearted view to the history of the craft. At the beginning of the film during the fake newsreel, the name of the airship "Graf Zeppelin" is shown painted on its side but it is painted in a different font, a dead giveaway that the airship shown is actually the "", which was not completed until the year after the Hindenburg crashed, and therefore a 1937 newsreel would not show it. Immediately after, the story reverts to the events of the last flight, with aspects of the saga being told through many of the passengers and crew of the airship, played by an all-star, ensemble cast, including , , and .

A fictional character Colonel Ritter (George C. Scott) boards with the intention of protecting the Hindenburg as various threats have been made to down the airship which some see as a symbol of Nazi Germany. Ritter is assisted by Nazi government official Martin Vogel (Roy Thinnes), although both operate independently in investigating the background of all passengers and crew on the voyage. Ritter has reason to suspect everyone even his old friend, a German countess (Anne Bancroft) who vehemently opposes the Nazi regime. Other prime suspects include card sharks Emilio Pajetta (Burgess Meredith) and Major Napier (Rene Auberjonois), Edward Douglas (Gig Young), a suspicious German-American ad executive, as well as several crew members and even the Hindenburg's captains Pruss (Charles Durning) and Lehmann ().

In the film, the characters of Ernst Lehmann and () are portrayed as very wary of the Nazi party. In reality, while Eckener hated the Nazis and spoke against them openly, Lehmann was very accommodating to the powers in Berlin in order to advance his career and the fortunes of the Zeppelin Company. In fact, while the movie shows Lehmann protesting using the ship in the previous year to drop propaganda leaflets, in reality Lehmann was eager and glad to oblige in this undertaking, to the extent that he launched the ship in a dangerous wind condition, bashing in the tail. In real life Eckener lashed out at Lehmann for endangering the ship to please the Nazis, resulting in Propaganda Minister Goebbels blacklisting Eckener in the press forever after, despite his being a national (and international) heroFact|date=September 2008.

As the Hindenburg makes its way to , events conspire against Ritter and Vogel. Although a saboteur is nearly caught, the airship explodes over ; actual newsreel footage of the explosion is intertwined with the film footage to recreate the dramatic last moments of the airship. The film focuses on a bomb exploding and uses a unique utilizing , (a combination of a model of the Zeppelin, and a superimposed explosion) to recreate the first moments of the actual explosion (which were missed by all newsreel cameras at the actual event), subtly dissolving into the black and white news films taken at the scene.

The film ended with a tribute to Herbert Morrison's radio commentary, with the memorable quotation, "Oh the humanity!"

Two dramatic escapes depicted in the film were based on fact (though one was slightly inaccurate).
* Werner Franz, a 14 year old cabin boy, escaped the flames after a water ballast tank overhead burst open and soaked him with water. He then made his way to the hatch and turned around and ran the other way, because the flames were being pushed by the wind towards the starboard side. In the movie however, he is depicted being doused by the water after he jumped out. He is one of the two people aboard who are still alive as of 2007.
* Passenger Joseph Spah, a circus performer, escaped by smashing a window with his home movie camera (the film survived the disaster), and grabbed a landing line, jumping to the ground when the ship was low enough. He survived with only a broken ankle.

Many of the fictional characters are based on actual people. For example: Franz Ritter is based on Fritz Erdmann, Karl Boerth is based on Eric Spehl, as well as a few others.

A full cast and production crew list is too lengthy to include, see: IMDb profile.

Director Robert Wise, known for an attention to detail and background research, began to collect documents and film footage on the real-life Hindenburg for over a year at the in , the Library and Archives in as well as in Germany.

Studio and special effects work was carried out at Sound Stage 12 in the complex. Wise's research was used to advantage since the bulk of blueprints were destroyed in World War II. Using photographs, a recreated passenger area, gondola and superstructure of the giant airship was constructed to create a realistic exterior and interior set for the actors. A team of 80 artists and technicians working double shifts for four months, assembled a "giant erector set" consisting of eight tons of , 11,000 yards of , 24,000 ft of sash cord and 2,000,000 rivets.

"The Hindenburg" made extensive use of s to bring the Zeppelin to life, in addition to a highly-detailed 25-foot long miniature which was "flown" via an elaborate setup where the stationary model was photographed by a mobile platform consisting of a camera and dolly on a track. on Universal Studios largest and tallest sound stage, Stage 12. The miniature of the Hindenburg today is on display at the in [ Russo 2003]

A real-life tragedy nearly happened during the filming of the "Hindenburg"'s fiery death. A full-scale section of the Zeppelin's nose was built for the film on Universal Studios' Stage 12, and was set to be destroyed by fire for the film's final destruction sequence. A half-dozen stunt artists wearing fire-retardant gear were placed in the nose replica as it was set afire; however, the fire quickly got out of control, causing several stunt artists to get lost in the smoke, damaging several cameras filming the action, and nearly destroyed the sound stage. Some of the footage from this sequence was used in the final cut of the film, but the full sequence, as it had been planned, was not included.

The film tries to stay fairly accurate although minor inaccuracies occurred:
* The markings "D-LZ129" should be on the top of the ship, while the model is missing this and only has "D-LZ129" on the sides. Another inaccuracy is that "D-LZ129" on the sides is written too small and too much to the back of the ship although it is still between the "space" of the two engine cars.
* The landing wheel always "folds" back in the model, while the wheel is often swiveled forward during flight in the real "Hindenburg".
* The passenger gangway doors are swung open inaccurately because in reality they had to be opened manually and wouldn't land directly on the ground (rolling stairs were provided to let passengers walk down without jumping)
* The part when the port fin's fabric rips did not happen to the "Hindenburg" but is based on an incident that happened to the "Graf Zeppelin".
* A historical error in the film is the addition of a on the last flight. While the "Hindenburg" did indeed have a piano aboard for the 1936 season, it was removed in 1937 to save weight.
* The mooring mast used in the landing sequence is black while the real mooring mast was red and white.
* During the landing sequence the ship drops water ballast through some of the windows on the keel near the nose instead of through holes much more towards the gondola as well as near the tail section.
* While the explosion sequence when the model is "blown up" is realistic and is in black and white, in reality the explosion should have spread to the stern more and two strange objects were seen in the photographs of the disaster, which were most likely fuel tanks and/or water tanks, were missing in the explosion sequence. Fact|date=January 2008
* Also, in the sequence when the ground crew are running away from the ship, the ship's port side seems to be losing more fabric, while in reality the port side did not spread that fast.Fact|date=January 2008
* The film is set in 1937. At one time the dialog refers to the fact that the German car manufacturer Opel is to be taken over by General Motors "the next day". In fact, Opel had already been taken over completely in 1929.
* Although a military band plays the German national anthem during the start of The "Hindenburg", no male spectator removes his hat and no military personnel salute, which would have been simply impossible in the Nazi era.
* On board the "Hindenburg", the Countess is reading a paperback book, which is a German-language edition of "". Paperback books were introduced in Germany no earlier than 1948.
* At one of the airports there are delivery cars which were built in the 1950s.
* The landing approach is also very inaccurate. The Hindenburg appears to approach making turn to the left and skids to starboard when the wind shifts. Then the Captain orders a sharp turn to port. In reality the Hindenburg approached with a turn to the left to circle the field and then made a final sharp turn to starboard, skidding to port at the very end.Fact|date=January 2008

Although well received by the public as typical "disaster movie" fare, "The Hindenburg" was "savaged" by critics. from the "Chicago Sun-Times" dismissed it as a failed project, "The Hindenburg" is a disaster picture, all right. How else can you describe a movie that cost $12 million and makes people laugh out loud at all the wrong times?" [ [http://rogerebert.suntimes.com/apps/pbcs.dll/article?AID=/19750101/REVIEWS/501010330/1023 The Hindenburg Review: Roger Ebert] ] Similar reactions were recounted and when the film eventually made it to television screens, the "TV Guide" summed up a near-universal review: "This insipid, boring, implausible, senseless, deliciously funny, and expensively mounted film... There's no tension whatsoever and none of the characters is remotely interesting, let alone sympathetic." [ [http://www.tvguide.com/movies/hindenburg/review/100960 TV Guide Review] ]

Despite critical reaction, "The Hindenburg" was noteworthy for its use of special effects and won two Special Achievement in 1976:
* for Sound Effects
* and for Visual Effects

In the same year, "The Hindenburg" was nominated for an "Eddie" in the category of Best Edited Feature Film in the American Cinema Editors Awards.