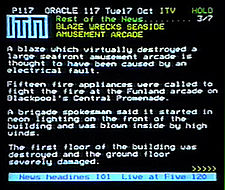 ORACLE (from "Optional Reception of Announcements by Coded Line Electronics"[1]) was a commercial teletext service first broadcast on ITV in 1974 and later on Channel 4 in the United Kingdom, finally ending on both channels at 23:59 GMT on 31 December 1992.

It was developed and launched by a consortium backed by the Independent Broadcasting Authority at about the same time as the BBC's Ceefax service. Due to the lack of available receivers, exact launch dates have been left obscure. Receivers became popular around 1980.

ORACLE moved away from being an experimental engineering department and more towards being a content provider. Under the original plans for the ITV franchise renewal, they were to have been scrapped at the end of 1992 and the few scan lines they used given to the highest bidder. ORACLE successfully campaigned for the creation of a franchise for the teletext service on ITV and Channel 4, only to find themselves outbid by Teletext Ltd., a consortium originally comprising Associated Newspapers, Philips Electronics and Media Ventures International, who started broadcasting at midnight on 1 January 1993.

Because of the rivalry between the two companies, ORACLE did not carry television listings beyond its midnight closing time on New Year's Eve 1992. It merely stated "00.00 The End of Oracle, Now the Nightmare Begins".

Even now Oracle is perhaps best remembered[citation needed] for its advertising slogan "Page The Oracle".