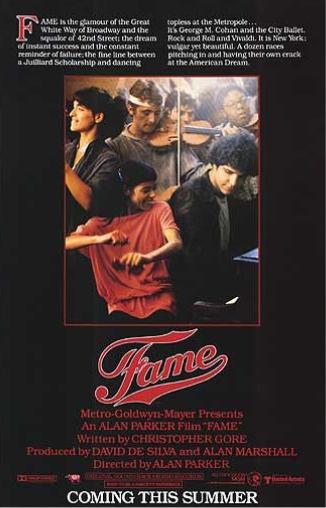 "Fame" is a 1980 conceived and produced by David De Silva, directed by , and written by Christopher Gore. The film follows a group of students through their studies at the (which later merged with the High School of Music and Art to become the current Fiorello H. LaGuardia High School of Music & Art and the Performing Arts). The film is split into sections corresponding to auditions, freshman, sophomore, junior and senior years. This movie ranked number 42 on ""'s list of the [http://www.ew.com/ew/report/0,6115,1532588_1_0_,00.html 50 Best High School Movies] .

Several of the teachers are also introduced:

Students learn on the first day of classes that academics are weighted equally with performance. Leroy clashes with Mrs. Sherwood in English class. Doris is overwhelmed by the energy and spontaneity in the lunchroom and flees, meeting Montgomery.

As the year progresses, Coco tries to convince Bruno to book performing gigs with her. Doris and Montgomery become friends, and Doris worries that she's too ordinary against the colorful personalities of the other students. Leroy and Mrs. Sherwood continue to clash over Leroy's refusal to do homework (Leroy is illiterate and ashamed to admit it). Bruno and his father argue over Bruno's reluctance to play his music publicly. Coco tells Bruno of her belief that she's "doing my last dance on this dark little planet" so it has to be spectacular. Miss Berg warns Lisa she is not working hard enough. Graduating senior Michael () wins a prestigious scholarship and tells Doris that the wants to send him out for auditions for s.

New student Hillary van Doren () joins the school, and she and Coco clash over Leroy. Hillary seduces him. Bruno and Mr. Shorofsky debate the merits of traditional orchestras versus synthesized instruments. As an acting exercise, students have to divulge a painful memory. Ralph tells of learning about the death of . Doris relates her humiliation at being forced by her to sing at a child's birthday party. Montgomery discusses discovering his , in the process to the school, for which he is teased by Ralph wearing ""-style drag. Bruno's father plays Bruno's music (the title song "Fame") outside the school, inspiring the student body to dance in the streets. Miss Berg drops Lisa from the dance program, and Lisa, after initially apparently considering , instead drops her dance clothes on the subway tracks and declares "Fuck it, if I can't dance I'll change to the drama department."

Ralph and Doris discover their mutual attraction, but their growing leaves Montgomery feeling excluded. Hillary brings Leroy home to shock her father and stepmother. Ralph's young sister is attacked by a , and so he lashes out at his mother's attempts to comfort the child by taking her to the local . Doris also begins to question her upbringing, changing her name to "Dominique DuPont." She and Ralph attend a screening of "" at the 8th Street Playhouse, and during the "" Doris rips off her blouse and joins the stage show. She becomes giddy the next day as she realizes that as an actress she can put on any personality she wants, but is sobered upon running into Michael, struggling as an actor and waiting tables.

Ralph follows in the footsteps of his idol Freddie Prinze and performs at and garners some initial success. He falls into a hard-party lifestyle and strains his relationship with Doris. Given a prime spot at a comedy club, he bombs, but Montgomery comforts him by telling him that bombing is part of the entertainment business. Hillary is offered a spot with the San Francisco ballet and, to take it, has an . Coco is approached in a diner by a sleazy guy claiming to be a director. She goes to his apartment for a "" and he manipulates her into undressing. Leroy is offered a spot in 's dance company, but to be accepted he must graduate. He finds Mrs. Sherwood outside her husband's hospital room and lashes out at her. She lashes back and, chagrined, he comforts her.

At graduation, the student body performs the finalé, "".

The score of the film won the .

"Fame" spawned a successful television show and a Musical that ran on 's West End for ten years. It also spawned a non-musical play featuring the title song from the film as its lone musical number.