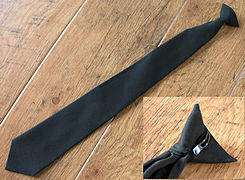 Clip-on tie. Inset: Metal Clip used to fasten it onto the front of a shirt

The clip-on tie is a bow tie or four-in-hand tie which is permanently tied, with a dimple just below the knot, and which is fixed to the front of the shirt collar by a metal clip. Alternately, the tie may have a band around the neck fastened with a hook and eye.

People in white collar occupations are often mocked for wearing a clip-on tie in lieu of a standard necktie, the implication being that refusal to learn how to tie a "proper" tie reflects a wider lack of sophistication. Pre-tied bow ties are especially disliked in formal circles; according to one writer, "The quirky irregularities of a self-tied bow give it personality and flair... while the cookie-cutter precision of a pre-tied model diminishes it to an assembly-line commodity."[2] Because child-sized ties are often clip-ons, some consider clip-ons juvenile. Finally, clip-on ties are generally available in limited styles, sizes, and prints relative to their conventional counterparts.