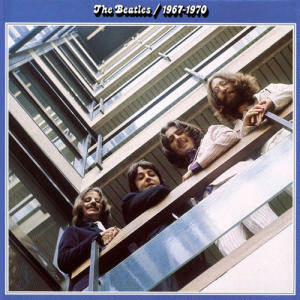 The cover art shows the band once again looking down the stairwell of EMI's Manchester Square headquarters in ; the same pose, camera angle, setting and photographer () as used for the cover on the "" and "1962–1966" albums, which used different photos from the same photo session. The image was originally shot for the "Get Back" album, which later became "Let It Be", but in the end the photograph was not used for that project.

The Beatles themselves participated in selecting the songs for inclusion, as well as the colours and pictures. Songs performed by the Beatles as solo artists were also considered for inclusion, but like the cover songs on "1962–1966", limited space resulted in this idea having to be abandoned.

*The version was released on two discs.
*The first side comprises popular selections from the Sgt. Pepper recording sessions along with "All You Need Is Love" which was released within the same summer as Sgt. Pepper. While the first 3 tracks of Sgt. Pepper are in order, for CD release a unique 'clean' edition of "A Day in the Life" is included, without the cross-fade from "Sgt. Pepper's Lonely Hearts Club Band (Reprise)". On vinyl editions the track starts with a fade-in before the cross-fade.
*The single versions of "Get Back" and "Let It Be" make their U.S. album debut with this compilation (The latter erroneously shows the LP running time of 4:01)
*The US version has "Hello Goodbye" in mono and "I Am The Walrus" with the four-beat intro. This was corrected for the CD release.
*All tracks written by , except where noted.