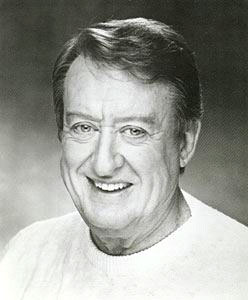 Tom Poston (, – , ) was an American television and film . He starred on in a career that began in 1950. He appeared as a comic actor, game show panelist, comedy/variety show host, film actor, television actor, and Broadway performer.

Poston was born in , the son of Margaret and George Poston, who was a liquor salesman and chemist. [ [http://www.filmreference.com/film/20/Tom-Poston.html Tom Poston Biography (1921-) ] ] After completing high school, Poston attended Bethany College in , but did not graduate.

Instead, he joined the in 1941. Accepted to officer candidate school and then graduating from flight training, Poston served as a pilot in the European Theater in ; his aircraft dropped paratroopers for the Normandy invasion. Poston served in North Africa, Italy, France, and England. After his discharge, he began studying acting in .

In the 1950s, Poston gained recognition as a comedic "Man in the Street" (along with his colleagues , and ) on the "". For these performances, Poston won the 1959 for Best Supporting Actor (Continuing Character) in a Comedy Series. Following that, he appeared frequently on Broadway and as a television game show panelist, including regular appearances on "" and "". While Poston's film career was limited to quirky comedies (such as 's "" and "The Old Dark House" in the 1960s), his television career was expansive, covering the better part of five decades, and saw him contributing his comedic talents in virtually every corner of the medium, from made-for-TV movies to variety shows to situation comedies to talk shows and even to voice-overs for cartoons.Poston was a recurring guest star on "" in the 1970s. He later played the role of Franklin Delano Bickley on "". A longtime friend of , Poston played George Utley, bumbling country handyman of the Stratford Inn, on "" and appeared with Newhart in Cold Turkey (1971) as the town drunk, Edgar Stopworth. He was nominated for an Emmy Award three times for Outstanding Supporting Actor in a Comedy Series for his performance on "": in 1984, 1986, and 1987. He had a third role with Newhart in the short-lived "Bob".

In 2001, Poston married for the third time, to actress , who played the wife of Newhart's character Bob Hartley on "The Bob Newhart Show". Poston continued to appear in supporting roles in films, including 2003's "Beethoven's 5th" and two released in 2004, "" and "", and on several television programs. In 2005, he played the character "Clown" on the brief-lived series "Committed". mentions Poston as a writer for the "" in their song "Critic Intro". In 2006 Poston guest-starred on an episode of "" in the episode "Ah! Wilderness" as Merle, which became his final acting role.