Diocese of Sodor and Man

Sodor and Man is a diocese of the Church of England. Originally much larger, today it covers just the Isle of Man and its adjacent islets.

See also: Diocese of the Isles 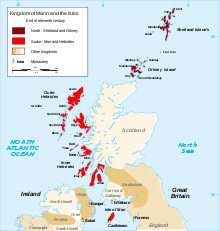 The Kingdom of Mann and the Isles about the year 1100. Sodor and Mann in red.

The Norwegian diocese of Sodor was formed 1154, covering the Hebrides and the other islands along the west coast of Scotland. The name in the original Norse was Suðreyjar (Sudreys or "southern isles"), in contrast to the Norðreyjar, the "northern isles" of Orkney and Shetland. The Isle of Man was included in with these southern isles. This diocese was a suffragan of the archdiocese of Trondheim. 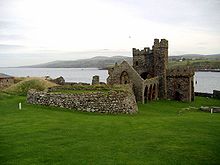 Norway controlled all these islands until 1266, when they were ceded to Scotland. The Isle of Man was detached from the Scottish islands and came under the suzerainty of the Kings of England in 1334. Thereafter it was held by feudal Lords of Man (the Stanleys, Earls of Derby, from 1406 to 1736 and the Dukes of Atholl from 1736) until the lordship was purchased by the British Crown in 1765. The right to appoint the Bishop of Sodor and Man belonged to the Lords of Man, and continued to be exercised by the Dukes of Atholl after the revestment in 1765 until it was surrendered to the Crown in 1828. The Isle of Man was never incorporated into the Kingdom of England, or the United Kingdom, but is a Crown Dependency. In common with the rest of the Church of England, at the English Reformation the Diocese left the Roman Catholic Church under Henry VIII, the bishop Thomas Stanley was not a supporter of the reforms (particularly the reallocation of his Diocese from the Province of Canterbury to the Province of York) and was deprived of office by Henry, was briefly reunited to it under Mary I (who restored Stanley to office),[2] and separated once again under the religious settlement devised by Elizabeth I. Since the Isle of Man was not part of the Kingdom of England, the Act of Uniformity 1662 passed at the English Restoration did not apply to it, so Bishop Thomas Wilson was free to introduce worship in the Manx language during his episcopate (1697–1755), and resolve issues of clergy discipline that the Isle of Man's unique status had led to.[3]

Usage of Sodor and Man

It is possible that the origin of the name "Sodor" was lost and its meaning was applied to St Patrick's Isle as the seat of the bishop. The termination "and Man" may have been added in the 17th century in ignorance of the proper application of the name of Sodor to the bishopric of Man.[4] By the latter part of the 16th century the terms "Sodor" and "Man" had become interchangeable, the bishopric being spoken of as that of "Sodor" or "Man" or "Sodor and Man", or sometimes all three, for the avoidance of doubt (e.g. the grant of the lordship of the Island to the Earl of Derby in 1610 included "the Patronage of the Bishopricke of the said Isle of Mann, and the Patronage of the Bishopricke of Sodor, and the Patronage of the Bishopricke of Sodor and Mann"[5]).

Until 1604 the bishops invariably signed themselves "Sodorensis"; between that date and 1684, sometimes they used "Soderensis" and sometimes "Sodor and Man"; between 1684 and 2007 all bishops signed "Sodor and Man" or "Sodor and Mann". However, the present bishop, the Rt Rev Robert Paterson, signs "Sodor as Mannin", the Manx equivalent. 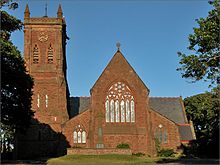 The original cathedral of the Diocese of Sodor and Man was on St Patrick's Isle at Peel. This cathedral fell into disuse during the 18th century and for many years the Bishop's chapel at Bishopscourt, near Kirk Michael, served as a Pro-cathedral. This was a Gothic building, rebuilt in 1814 and again in 1858, and dedicated to St Nicholas. In 1979 Bishopscourt was sold, and the following year the parish church of St German in Peel was designated as "the Cathedral Church of St German" by Act of Tynwald[6].