Clathrate hydrates (or gas clathrates, gas hydrates, clathrates, hydrates, etc.) are crystalline water-based solids physically resembling ice, in which small non-polar molecules (typically gases) or polar molecules with large hydrophobic moieties are trapped inside "cages" of hydrogen bonded water molecules. In other words, clathrate hydrates are clathrate compounds in which the host molecule is water and the guest molecule is typically a gas or liquid. Without the support of the trapped molecules, the lattice structure of hydrate clathrates would collapse into conventional ice crystal structure or liquid water. Most low molecular weight gases (including O2, H2, N2, CO2, CH4, H2S, Ar, Kr, and Xe), as well as some higher hydrocarbons and freons will form hydrates at suitable temperatures and pressures. Clathrate hydrates are not chemical compounds as the sequestered molecules are never bonded to the lattice. The formation and decomposition of clathrate hydrates are first order phase transitions, not chemical reactions. Their detailed formation and decomposition mechanisms on a molecular level are still not well understood.[1][2] Clathrate hydrates were first documented in 1810 by Sir Humphry Davy.[3]

Clathrates have been found to occur naturally in large quantities. Around 6.4 trillion (i.e. 6.4x1012) tonnes of methane is trapped in deposits of methane clathrate on the deep ocean floor.[4] Such deposits can be found on the Norwegian continental shelf in the northern headwall flank of the Storegga Slide. Clathrates can also exist as permafrost, as at the Mallik gas hydrate field in the Mackenzie Delta of northwestern Canadian Arctic. These natural gas hydrates are seen as a potentially vast energy resource, but an economical extraction method has so far proven elusive. Hydrocarbon clathrates cause problems for the petroleum industry, because they can form inside gas pipelines often resulting in plug formation. Deep sea deposition of carbon dioxide clathrate has been proposed as a method to remove this greenhouse gas from the atmosphere and control climate change.

Clathrates are suspected to occur in large quantities on some outer planets, moons and trans-Neptunian objects, binding gas at fairly high temperatures. 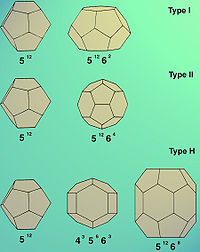 The unit cell of Type I consists of 46 water molecules, forming two types of cages – small and large. The small cages in the unit cell are two against six large ones. The small cage has the shape of a pentagonal dodecahedron (512) and the large one that of a tetradecahedron, specifically a hexagonal truncated trapezohedron (51262), together forming a Weaire-Phelan structure. Typical guests forming Type I hydrates are CO2 in carbon dioxide clathrate and CH4 in methane clathrate.

The unit cell of Type II consists of 136 water molecules, forming also two types of cages – small and large. In this case the small cages in the unit cell are sixteen against eight large ones. The small cage has again the shape of a pentagonal dodecahedron (512) but the large one is a hexadecahedron (51264). Type II hydrates are formed by gases like O2 and N2.

The unit cell of Type H consists of 34 water molecules, forming three types of cages – two small of different type and one huge. In this case, the unit cell consists of three small cages of type 512, twelve small ones of type 435663 and one huge of type 51268. The formation of Type H requires the cooperation of two guest gases (large and small) to be stable. It is the large cavity that allows structure H hydrates to fit in large molecules (e.g. butane, hydrocarbons), given the presence of other smaller help gases to fill and support the remaining cavities. Structure H hydrates were suggested to exist in the Gulf of Mexico. Thermogenically-produced supplies of heavy hydrocarbons are common there.

Hydrates in the Universe

Iro et al.,[7] trying to interpret the nitrogen deficiency in comets, stated most of the conditions for hydrate formation in the protoplanetary nebulae, surrounding the pre-main and main sequence stars were fulfilled, despite the rapid grain growth to meter scale. The key was to provide enough microscopic ice particles exposed to a gaseous environment. Observations of the radiometric continuum of circumstellar discs around τ-Tauri and Herbig Ae/Be stars suggest massive dust disks consisting of millimeter-sized grains, which disappear after several million years (e.g.,[8][9]). A lot of work on detecting water ices in the Universe was done on the Infrared Space Observatory (ISO). For instance, broad emission bands of water ice at 43 and 60 μm were found in the disk of the isolated Herbig Ae/Be star HD 100546 in Musca. The one at 43 μm is much weaker than the one at 60 μm, which means the water ice, is located in the outer parts of the disk at temperatures below 50 K.[10] There is also another broad ice feature between 87 and 90 μm, which is very similar to the one in NGC 6302 [11] (the Bug or Butterfly nebula in Scorpius). Crystalline ices were also detected in the proto-planetary disks of ε-Eridani and the isolated Fe star HD 142527[12][13] in Lupus. 90 % of the ice in the latter was found crystalline at temperature around 50 K. HST demonstrated that relatively old circumstellar disks, as the one around the 5 million year old B9.5Ve[14] Herbig Ae/Be star HD 141569A, are dusty.[15] Li & Lunine[16] found water ice there. Knowing the ices usually exist at the outer parts of the proto-planetary nebulae, Hersant et al.[17] proposed an interpretation of the volatile enrichment, observed in the four giant planets of the Solar System, with respect to the Solar abundances. They assumed the volatiles had been trapped in the form of hydrates and incorporated in the planetesimals flying in the protoplanets’ feeding zones.

Kieffer et al. (2006) suggest that the geyser activity in the south polar region of Saturn's moon Enceladus originates from clathrate hydrates, where carbon dioxide, methane, and nitrogen are released when exposed to the vacuum of space by the "Tiger Stripe" fractures found in that area.[18]

Carbon dioxide clathrate is believed to play a major role in different processes on Mars. Hydrogen clathrate is likely to form in condensation nebulae for gas giants.

Naturally on Earth gas hydrates can be found on the seafloor, in ocean sediments,[19] in deep lake sediments (e.g. Lake Baikal), as well as in the permafrost regions. The amount of methane potentially trapped in natural methane hydrate deposits may be significant (1015 to 1017 cubic metres),[20] which makes them of major interest as a potential energy resource. Catastrophic release of methane from the decomposition of such deposits may lead to a global climate change, because CH4 is more efficient greenhouse gas even than CO2 (see Atmospheric methane). The fast decomposition of such deposits is considered a geohazard, due to its potential to trigger landslides, earthquakes and tsunamis. However, natural gas hydrates do not contain only methane but also other hydrocarbon gases, as well as H2S and CO2. Air hydrates are frequently observed in polar ice samples. Pingos are common structures in permafrost regions.[21] Similar structures are found in deep water related to methane leakages.

It is important to notice that gas hydrates can even be formed in the absence of a liquid phase. Under that situation, water is dissolved in gas or in liquid hydrocarbon phase ([22]).

Thermodynamic conditions favouring hydrate formation are often found in pipelines. This is highly undesirable because the clathrate crystals might agglomerate and plug the flowline[23] and cause flow assurance failure and damage valves and instrumentation. The results can range from flow reduction to equipment damage.

Hydrates have a strong tendency to agglomerate and to adhere to the pipe wall and thereby plug the pipeline. Once formed, they can be decomposed by increasing the temperature and/or decreasing the pressure. Even under these conditions, the clathrate dissociation is a slow process.

Therefore, preventing hydrate formation appears to be the key to the problem. A hydrate prevention philosophy could typically be based on three levels of security, listed in order of priority:

The actual philosophy would depend on operational circumstances such as pressure, temperature, type of flow (gas, liquid, presences of water etc.)

When operating within a set of parameters where hydrates could be formed, there are still ways to avoid their formation. Altering the gas composition by adding chemicals can lower the hydrate formation temperature and/or delay their formation. Two options generally exist:

The most common thermodynamic inhibitors are, methanol, monoethylene glycol (MEG) and diethylene glycol (DEG) commonly referred to as glycol. All may be recovered and recirculated, but the economics of methanol recovery is not favourable in most cases. MEG is preferred over DEG for applications where the temperature is expected to be −10 °C or lower due to high viscosity at low temperatures. Triethylene glycol (TEG) has too low vapour pressure to be suited as an inhibitor injected into a gas stream. More methanol is lost in the gas phase when compared to MEG or DEG.