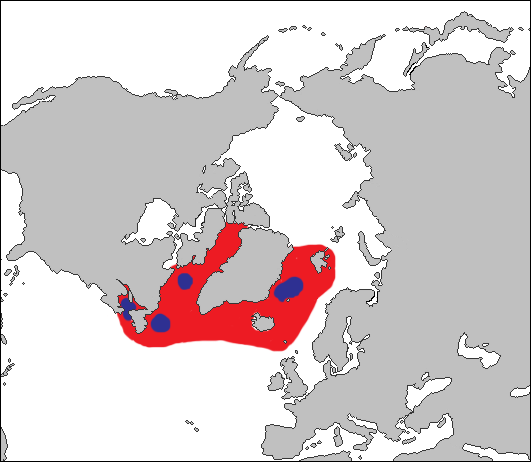 range_map_caption = Distribution of the Hooded Seal. Breeding grounds indicated in blue.The Hooded Seal ("Cystophora cristata") is an found only in the central and western ranging from in the east to the in the west.

The generic name means 'bladder-bearer' in Greek, from the peculiar on the of the adult male. The seal is named after a cap-like bulge essay on the forehead and nose of the adult male which does not hang down, unlike that of the s.

The bulge develops when the seal is four years old. The male can blow up this bulge, so that the size of its head seems to be twice as large. Very rarely the bulge can become infected and turn a bright red color.

In April through June, after the breeding season, this species travels long distances to feed and eventually gather together again in separate areas on the ice from June through August. After moulting, it disperses widely again to feed in the late summer and autumn before returning to the breeding areas in late winter.

There are four major breeding areas: the Gulf of St. Lawrence, the "Front" east of Newfoundland, (between and ) and the West Ice near .

Pups are about m to ft|1|abbr=yes|wiki=yes|precision=0 long at birth and weigh about kg to lb|24|abbr=yes|wiki=yes|precision=0. They are born on the ice from mid-March to early April with a well-developed layer and having shed their pre-natal coat. They are born with a slate blue-grey coat (giving them the name "blueback"), with a pale cream color on the belly, which they will moult after about 14 months. Nursing of the pup lasts for an average of only 4 days, the shortest period of any mammal, during which the pup doubles in size from about. This is possible because the milk that they drink has a fat content of 60%. [ [http://www.ncbi.nlm.nih.gov/sites/entrez?db=pubmed&uid=7601954&cmd=showdetailview&indexed=google Prenatal and postnatal transfer of fatty acids fro... [J Comp Physiol [B. 1995 - PubMed Result ] ] The female pup will mature between ages 3 and 6, whereas the male pup will mature between ages 5 and 7.