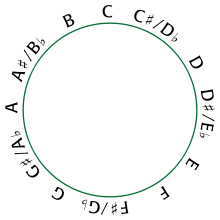 The simplest pitch space model is the real line. Fundamental frequencies f are mapped to numbers p according to the equation

Other models of pitch class space, such as the circle of fifths, attempt to describe the special relationship between pitch classes related by perfect fifth. In equal temperament, twelve successive fifths equate to seven octaves exactly, and hence in terms of pitch classes closes back to itself, forming a circle. Abstractly, this circle is a cyclic group of order twelve, and may be identified with the residue classes modulo twelve.

If we divide the octave into n equal parts, and choose an integer m<n such that m and n are relatively prime, we may obtain similar circles, which all have the structure of finite cyclic groups. By drawing a line between two pitch classes when they differ by a generator, we can depict the circle of generators as a cyclic graph, in the shape of a regular polygon.

If we divide the octave into n parts, where n = rs is the product of two relatively prime integers r and s, we may represent every element of the tone space as the product of a certain number of "r" generators times a certain number of "s" generators; in other words, as the direct sum of two cyclic groups of orders r and s. We may now define a graph with n vertices on which the group acts, by adding an edge between two pitch classes whenever they differ by either an "r" generator or an "s" generator (the so-called Cayley graph of

with generators r and s). The result is a graph of genus one, which is to say, a graph with a donut or torus shape. Such a graph is called a toroidal graph.

We may generalize immediately to any number of relatively prime factors, producing graphs can be drawn in a regular manner on an n-torus.

A linear temperament is a regular temperament of rank two generated by the octave and another interval, commonly called "the" generator. The most familiar example by far is meantone temperament, whose generator is a flattened, meantone fifth. The pitch classes of any linear temperament can be represented as lying along an infinite chain of generators; in meantone for instance this would be -F-C-G-D-A- etc. This defines a linear modulatory space.

A temperament of rank two which is not linear has one generator which is a fraction of an octave, called the period. We may represent the modulatory space of a such a temperament as n chains of generators in a circle, forming a cylinder. Here n is the number of periods in an octave.

For example, diaschismic temperament is the temperament which tempers out the diaschisma, or 2048/2025. It can be represented as two chains of slightly (3.25 to 3.55 cents) sharp fifths a half-octave apart, which can be depicted as two chains perpendicular to a circle and at opposite side of it. The cylindrical appearance of this sort of modulatory space becomes more apparent when the period is a smaller fraction of an octave; for example, ennealimmal temperament has a modulatory space consisting of nine chains of minor thirds in a circle (where the thirds may be only 0.02 to 0.03 cents sharp.)

Five limit just intonation has a modulatory space based on the fact that its pitch classes can be represented by 3a 5b, where a and b are integers. It is therefore a free abelian group with the two generators 3 and 5, and can be represented in terms of a square lattice with fifths along the horizontal axis, and major thirds along the vertical axis.

In many ways a more enlightening picture emerges if we represent it in terms of a hexagonal lattice instead; this is the Tonnetz of Hugo Riemann, discovered independently around the same time by Shohé Tanaka. The fifths are along the horizontal axis, and the major thirds point off to the right at an angle of sixty degrees. Another sixty degrees gives us the axis of major sixths, pointing off to the left. The non-unison elements of the 5-limit tonality diamond, 3/2, 5/4, 5/3, 4/3, 8/5, 6/5 are now arranged in a regular hexagon around 1. The triads are the equilateral triangles of this lattice, with the upwards-pointing triangles being major triads, and downward-pointing triangles being minor triads.

This picture of five-limit modulatory space is generally preferable since it treats the consonances in a uniform way, and does not suggest that, for instance, a major third is more of a consonance than a major sixth. When two lattice points are as close as possible, a unit distance apart, then and only then are they separated by a consonant interval. Hence the hexagonal lattice provides a superior picture of the structure of the five-limit modulatory space.

In similar fashion, we can define a modulatory space for seven-limit just intonation, by representing 3a 5b 7c in terms of a corresponding cubic lattice. Once again, however, a more enlightening picture emerges if we represent it instead in terms of the three-dimensional analog of the hexagonal lattice, a lattice called A3, which is equivalent to the face centered cubic lattice, or D3. Abstractly, it can be defined as the integer triples (a, b, c), associated to 3a 5b 7c, where the distance measure is not the usual Euclidean distance but rather the Euclidean distance deriving from the vector space norm

In this picture, the twelve non-unison elements of the seven-limit tonality diamond are arranged around 1 in the shape of a cuboctahedron.