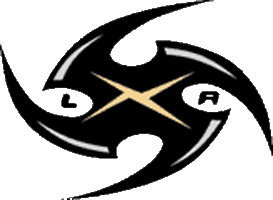 The Los Angeles Xtreme was a short-lived professional team based in . The team was a member of the failed begun by of and by NBC, a major network in the . The team played its home games in the in the spring of . They were in the XFL's Western Division with the , the and the . They finished the season in 1st place with a 7-3 record and defeated the in the and the in the with a score of 38-6 to win the league's first (and only) Championship.

The LA Xtreme were the only champions of the XFL because NBC dropped the XFL concept after the first season due to dismal ratings. Shortly after this, McMahon announced that the league would be dissolved. However, the Xtreme's quarterback, , subsequently caught on with the of the , later leading them into the playoffs in 2001 and 2002. Maddox also won the XFL's Most Valuable Player award. has become one of the best CFL receivers ever with his former team, the and his current team, the .

*8 QB () Maddox, a former first round draft pick, played five seasons in the NFL seeing playing time with the , , , and . After the XFL Maddox played with the . In his return, Maddox was named the for the . Maddox is currently the only player to win both an XFL Championship and a Super Bowl ().

*69 OT college (Louisville) Crafts is a seasoned vet having played in the old World League with the . He saw playing time in the NFL for the . Crafts keep himself busy playing for the Arena Football League's then played for the CFL's in 2000 before joining the XFL's LA Xtreme

* DB college () Keck wigned with the in 2000 but was cut during the preseason. Is now a fitness trainer. Appeared on the new Fox , .