Not to be confused with husband and wife Tim McGraw and Faith Hill. 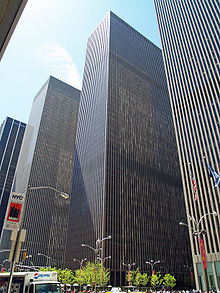 1221 Avenue of the Americas, the headquarters of McGraw-Hill 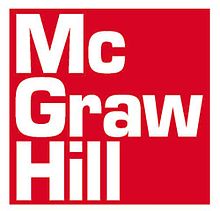 The McGraw-Hill Companies, Inc., (NYSE: MHP) is a publicly traded corporation headquartered in Rockefeller Center in New York City. Its primary areas of business are education, publishing, broadcasting, and financial and business services. It publishes numerous textbooks and magazines, including Architectural Record and Aviation Week, and is the parent company of Standard & Poor's, Platts, and J.D. Power and Associates. It is the majority owner of the Canadian publisher McGraw-Hill Ryerson (TSX). The company has its corporate headquarters in 1221 Avenue of the Americas, Midtown Manhattan, New York City.[2]

The McGraw-Hill Companies traces its history back to 1888 when James H. McGraw, co-founder of the company, purchased the American Journal of Railway Appliances. He continued to add further publications, eventually establishing The McGraw Publishing Company in 1899. His co-founder, John A. Hill, had also produced several technical and trade publications and in 1902 formed his own business, The Hill Publishing Company.

In 1909 both men, having known each other for some time and sharing the same interests, agreed upon an alliance and combined the book departments of their publishing companies into The McGraw-Hill Book Company. John Hill served as President, with James McGraw as Vice-President. 1917 saw the merger of the remaining parts of each business into The McGraw-Hill Publishing Company, Inc.[3] In 1986, McGraw-Hill bought out competitor The Economy Company, then the nation's largest publisher of educational material. The buyout made McGraw-Hill the largest educational publisher in the U.S.[4]

McGraw-Hill Publishing Company, Inc became The McGraw-Hill Companies in 1995, as part of a corporate identity rebranding.[5]

In a recent strategy move (2007), McGraw-Hill launched an online student study network, GradeGuru.com. This new offering gives McGraw-Hill an opportunity to connect directly with its end users, the students.

On October 3, 2011, McGraw-Hill announced it was selling its entire television station group to The E.W. Scripps Company for $212 million.[6]

The McGraw-Hill Companies organizes its businesses around three segments, based upon the market they are involved in.

McGraw-Hill Education provides materials, both traditionally and online, for all levels of education. The company also provides references & trade publications for the medical, business and engineering professions.[7]

Imprints within McGraw-Hill Education include:

This division, Standard & Poor's, provides independent investment research including ratings on various investment instruments, as well as various indices that gauge financial markets, such as the widely tracked S&P 500.

Presidents of the company

During the course of its history The McGraw-Hill Companies has expanded significantly through acquisitions, not just within the publishing industry but also into other areas such as financial services (the purchase of Standard & Poor's in 1966) and broadcasting (the 1972 acquisition of Time-Life Broadcasting).

Note that this list only includes acquisitions made by McGraw-Hill, not its subsidiaries. McGraw-Hill typically does not release financial information regarding its acquisitions or divestitures.

McGraw-Hill has partnered with five other higher-education publishers to create CourseSmart, a company developed to sell college textbooks in eTextbook format on a common platform.[16]

Connection to the family of George W. Bush

The families of the McGraws and President Bush have a long relationship. No Child Left Behind was highly profitable to McGraw-Hill and the implication is that federal education policy was influenced by the familiar relationship.[18] According to McGraw-Hill, Barbara Bush is a member of their advisory board.[19]

In 1999, the National Building Museum presented the McGraw-Hill Companies with its annual Honor Award for the corporation's contributions to the built environment.[20]