Lewis was born in Horsforth, Leeds, West Yorkshire, England, the son of Lynda (née Needham) and Adrian Lewis. [1] He has two brothers, Chris Lewis and actor Anthony Lewis.[2] Lewis is an avid fan of rugby league team Leeds in the Super League.[3] In an interview with WBEZ, Lewis stated his association with the number 11 and how it has appeared multiple times throughout his life, such as being 11 years old when obtaining the role for Harry Potter, which has caused him to obtain a tattoo of the number 11 on his right arm and to have myriad clothing with the number 11 on them.[4]

He has been acting since he was five years old.[4] He started off with minor parts in television programmes, debuting in Some Kind of Life. 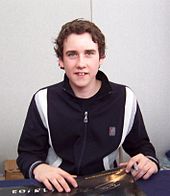 He then went on to try out for the part of Neville Longbottom. He has portrayed Neville Longbottom in the eight Harry Potter films. For his role as Neville Longbottom, Lewis wears false buck teeth, two-sizes-too-big shoes and has plastic bits placed behind his ears in order to make them stick out more.[5] During the filming of Harry Potter and the Order of the Phoenix, Helena Bonham Carter, who portrays Bellatrix Lestrange, accidentally ruptured Lewis's eardrum when she stuck her wand in his ear.[6]

Shot prior to the release of Deathly Hallows, Lewis plays the reporter in the upcoming independent film The Sweet Shop.[7]

In 2011, he played Lester Cole in a touring stage production of Agatha Christie's Verdict.[8][9]