In the United States, the phrase Kennedy family commonly refers to the family descending from the marriage of the Irish-Americans Joseph P. Kennedy, Sr. and Rose Elizabeth Fitzgerald that was prominent in American politics and government. Their political involvement has revolved around the Democratic Party. Harvard University educations have been common among them, and they have contributed heavily to that university's John F. Kennedy School of Government. The wealth, glamour and photogenic quality of the family members, as well as their extensive and continuing commitment to public service, has elevated them to iconic status over the past half-century and has led to their reputation as "America's Royal Family."[1][2][3]

Following the 1960 election of U.S. President John F. Kennedy, he and his two younger brothers, Robert F. Kennedy and Edward M. Kennedy, soon all held prominent positions in the federal government, and received intensive publicity, often emphasizing their youth (relative to comparably influential politicians), allure, education and collective future in politics. From 1947, when John F. Kennedy was first elected to Congress, to 2011, when Patrick J. Kennedy departed Congress, there was a 64-year run of a Kennedy family member holding an elective office in Washington.[4] This spans more than a quarter of the nation's existence.[4]

The family has suffered numerous tragedies known as "the Kennedy curse". These include Rosemary's failed lobotomy, the assassinations of brothers John and Robert, the controversial Chappaquiddick incident, and four airplane crashes (Joe, Jr., Kathleen, Ted and John, Jr.; all but Ted's were fatal).

The family patriarch was Patrick J. Kennedy (1858–1929), a first-generation American who married Mary Augusta Hickey (1857–1923). He was a politician involved in the local Democratic Party.

In 1914, their son, Joseph P. Kennedy, Sr. (1888–1969) married Rose Fitzgerald (1890–1995), the daughter of Boston (Massachusetts) Mayor John F. Fitzgerald. Joseph served as the first chairman of the U.S. Securities and Exchange Commission and as the United States Ambassador to the Court of St. James in the years leading up to World War II.

Together Joseph and Rose Kennedy had nine children: 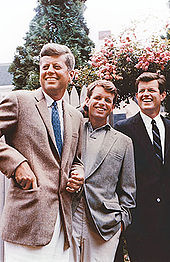 The two were twins.

The two are twins