Cabbage
This article is about the vegetable. For other uses, see Cabbage (disambiguation).

Cabbage is a popular cultivar of the species Brassica oleracea Linne (Capitata Group) of the Family Brassicaceae (or Cruciferae) and is a leafy green vegetable. It is a herbaceous, biennial, dicotyledonous flowering plant distinguished by a short stem upon which is crowded a mass of leaves, usually green but in some varieties red or purplish, which while immature form a characteristic compact, globular cluster (cabbagehead).

The plant is also called head cabbage or heading cabbage, and in Scotland a bowkail, from its rounded shape. The Scots call its stalk a castock,[1] and the British occasionally call its head a loaf.[2] It is in the same genus as the turnip – Brassica rapa.

Cabbage leaves often have a delicate, powdery, waxy coating called bloom. The occasionally sharp or bitter taste of cabbage is due to glucosinolate(s). Cabbages are also a good source of riboflavin. 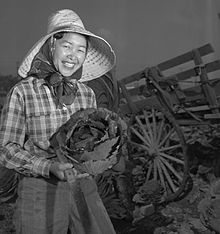 The cultivated cabbage is derived from a leafy plant called the wild mustard plant, native to the Mediterranean region, where it is common along the seacoast. Also called sea cabbage and wild cabbage,[3] it was known to the ancient Greeks and Romans; Cato the Elder praised this vegetable for its medicinal properties, declaring that "It is the cabbage that surpasses all other vegetables."[4] The English name derives from the Normanno-Picard caboche (head), perhaps from boche (swelling, bump). Cabbage was developed by ongoing selective breeding for suppression of the internode length.

The only part of the plant that is normally eaten is the leafy head; more precisely, the spherical cluster of immature leaves, excluding the partially unfolded outer leaves. Cabbage is used in a variety of dishes for its naturally spicy flavor. The so-called "cabbage head" is widely consumed raw, cooked, or preserved in a great variety of dishes.[5] It is the principal ingredient in coleslaw.

"Cabbages are extremely windy, whether you take them as meat or as medicine, as windy meat as can be eaten, unless you eat bag-pipes or bellows, and they are but seldom eaten in our days; and Colewort flowers are something more tolerable, and the wholesomer food of the two."

Cabbage is often added to soups or stews. Cabbage soup is popular in Central and eastern Europe, and cabbage is an ingredient in some kinds of borscht. Garbure (from Provençal garburo) is a thick soup of cabbage or other vegetables with bacon. Cabbage may be an ingredient in kugel, a baked pudding served as a side dish or dessert. Cabbage is also used in many popular dishes in India. Boiling tenderizes the leaves and releases sugars, which leads to the characteristic "cabbage" aroma. Boiled cabbage has become stigmatized because of its strong cooking odor and the fact that it causes flatulence. Moreover, boiling reduces the cabbage's anticancer properties.[6] It is often prepared and served with boiled meat and other vegetables as part of a boiled dinner. Harold McGee has studied the development of unpleasant smells when cooking brassicas and reports that they develop with prolonged cooking. According to Corriher's Compendium, smell doubles when prolonging cooking from five to seven minutes; for best results cabbage should be sliced thinly and cooked for four minutes.

Cabbage rolls, a type of dolma, are an East European and Middle Eastern delicacy. The leaves are softened by parboiling or by placing the whole head of cabbage in the freezer, and then the leaves are stuffed with a mixture of chopped meat and/or rice. Stuffed cabbage is called holishkes in Yiddish, holubky (Slovak and Czech), holubtsi (Ukrainian), gołąbki [ɡɔˈwɔmpki] (Polish), golubtsy (Russian), balandėliai (Lithuanian), tīteņi (Latvian), kohlrouladen (German) or töltött káposzta (Hungarian). It literally translates as "little pigeons" in Polish, Slovak and Lithuanian.[7]

A vegetable stuffed with shredded cabbage and then pickled is called mango.[8]

The largest cabbage dish ever made was on 19 December 2008 in the Macedonian city of Prilep, with 80,191 sarmas (cabbage rolls) weighing 544 kg (1,221 lbs).[9] Bubble and squeak consists of potatoes and cabbage or, especially formerly, potatoes, cabbage and meat fried together. Potatoes and cabbage or other greens boiled and mashed together make up a dish called colcannon, an Irish Gaelic word meaning white-headed cabbage, grounded in Old Irish terms for cabbage or kale (cāl), head (cend or cenn) and white (find). In the American South and Midland, "corn dodgers" were boiled as dumplings with cabbage and ham.[10]

Cabbage is the basis for German Sauerkraut. Chinese suan cai and Korean kimchi are produced using the related Chinese cabbage. To pickle cabbage, it is covered with a brine made of its own juice with salt, and left in a warm place for several weeks to ferment. Sauerkraut (colloquially referred to as "kraut") was historically prepared at home in large batches, as a way of storing food for the winter. The word comes from German sauer (sour) and kraut (plant or cabbage) (Old High German sūr and krūt). Cabbage can also be pickled in vinegar with various spices, alone or in combination with other vegetables (turnips can be cured in the same way). Korean baechu kimchi is usually sliced thicker than its European counterpart, and the addition of onions, chiles, minced garlic and ginger is common.

Cabbage is an excellent source of vitamin C. It also contains significant amounts of glutamine, an amino acid that has anti-inflammatory properties. Cabbage can also be included in dieting programs, as it is a low calorie food.

Along with broccoli and other Brassica vegetables, cabbage is a source of indole-3-carbinol, a chemical which boosts DNA repair in cells and appears to block the growth of cancer cells.[11][12] The compound is also used as an adjuvant therapy for recurrent respiratory papillomatosis, a disease of the head and neck caused by human papillomavirus (usually types 6 and 11) that causes growths in the airway that can lead to death. Boiling reduces anticancer properties.[6]

In European folk medicine, cabbage leaves are used to treat acute inflammation.[13] A paste of raw cabbage may be placed in a cabbage leaf and wrapped around the affected area to reduce discomfort. Some claim it is effective in relieving painfully engorged breasts in breastfeeding women.

Fresh cabbage juice has been shown to promote rapid healing of peptic ulcers.[14]

Effect on the thyroid gland

Cabbage may also act as a goitrogen. It blocks organification in thyroid cells, thus inhibiting the production of the thyroid hormones (thyroxine and triiodothyronine). The result is an increased secretion of thyroid-stimulating hormone (TSH) due to low thyroid hormone levels. This increase in TSH results in an enlargement of the thyroid gland (goiter).[15] 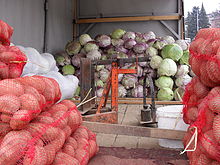 Cabbage for sale in Pristina, Kosovo

There are many varieties of cabbage based on shape and time of maturity.[16] Cabbages grown late in autumn and in the beginning of winter are called "coleworts"; their leaves do not form a compact head.[17] "Colewort" may also refer to a young cabbage. The word comes from Latin caulis (stalk of a plant, cabbage) and Old English wyrt (herb, plant, root). A "drumhead" cabbage has a rounded, flattened head. An "oxheart" cabbage has an oval or conical head. A "pickling" cabbage, such as the red-leafed cabbage, is especially suitable for pickling; 'Krautman' is the most common variety for commercial production of sauerkraut. Red cabbage is a small, round-headed type with dark red leaves. Savoy cabbage has a round, compact head with crinkled and curled leaves.[18][19] Winter cabbage will survive the winter in the open in mild regions such as the southern United States; the name is also used for Savoy cabbage. Other traditional varieties include white cabbage, 'Late Flat Dutch', 'Early Jersey Wakefield' (a conical variety), 'Danish Ballhead' (late, round-headed), 'Cuor di Bue Grosso' (conical heads, from Italy), 'Copenhagen Market Cabbage' (large round heads, from Denmark), and 'Mammoth Red Rock' (large round heads with deep red leaves).

The most cabbage in the world is produced in China, followed by India and then the Russian Federation.

Sometimes, young cabbages are picked early when they are tender and small, and eaten as "baby veggies". Those vegetables are more tender and sweet than older picked cabbages, and can be stored for a longer time.

Among the many destructive diseases affecting the cabbage and often other members of the cabbage family[20] are:

(See also List of Lepidoptera that feed on Brassica).

Many insects and other pests infest cabbage plants, among them:

There are two species of Chinese cabbage (lettuce cabbage, pakchoi, pechay) from Asia that somewhat resemble cabbage and are widely used as greens: Brassica chinensis, bok choy or celery cabbage, which forms a loose, chardlike head of dark green leaves, and Brassica pekinensis, or pe-tsai (peh-tsai), forming an elongated compact head of broad, light green leaves. Rape, an annual herb (Brassica napus) of European origin but known only as a cultigen, differs from the cabbage in its deeply lobed leaves, which are not hairy like those of the turnip.

A number of other noncruciferous plants bear the name "cabbage" or are likened to it by their appearance, though many are not food plants with parts for human consumption.

During World War II, "kraut" was an ethnic slur for a German soldier or civilian.

In Italian, cavolo (cabbage) is a mildly impolite expression with a similar connotation to the English "crap".

The French use a term of endearment, mon chou or mon petit chou, equivalent to "darling", but translated literally as "my little cabbage" in school French textbooks in England since the late 1950s. This is still used today, as can be seen in this extract from Shamrocks Falling by P A Matthews:[29]

“See there ma petite chou, now everything is worked out.”
Patricia turned and walked back to the desk. “Gérard, why must you call me ma petite chou all the time?”
“Ma chérie, it is an endearment. If you understood that in French…”
She cut him off mid sentence. “I know what it means Gérard. Even with my limited French vocabulary I know that it means my small cabbage.”
“But that is not the endearment. You do not understand…”'

In French, however, the term is only used in the masculine form as the word "chou" is masculine.

The word also refers to a pâtisserie item called chou à la crème, a sphere of light, airy pastry split and sandwiched with a thick layer of whipped or confectioner's cream. In addition, it is also used for a soft, cabbage-shaped ornament or rosette of fabric used in women's wear, such as a knot of ribbons on a dress or a crushed crown on a hat. Chou comes from the Latin caulis (stalk).