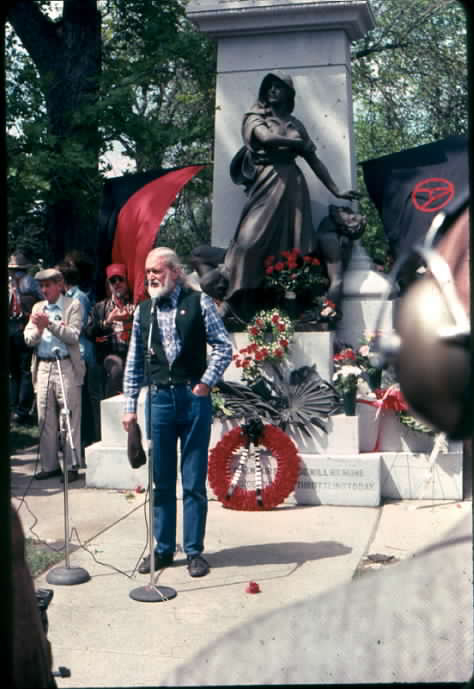 A fan of , Phillips adopted the stage name U. Utah Phillips.

Phillips was born in , to Edwin Deroger Phillips and Frances Kathleen Coates. He attended East High School in Salt Lake City. His father, Edwin Phillips, was a labor organizer, and his parents' activism influenced much of his life's work. Phillips was a card-carrying member of the Industrial Workers of the World, the "wobblies", headquartered in . Phillips rode the railroads, and wrote songs.

He served in the for three years beginning in 1956 (at the latest). Witnessing the devastation of post-war greatly influenced his social and political thinking.

Following service, he returned to and joined from the in establishing a mission named after the activist . [cite web |last=Rattler |first=Fast |title=Utah Phillips on the Catholic Worker, Polarization, and Songwriting |url=http://www.olywip.org/site/page/article/2006/02/01.html |format=interview |accessdate=2008-03-01] [cite web |last=Crane |first=Carolyn |title=Interview with Utah Phillips |url=http://zmagsite.zmag.oeg/JulAug2004/crane0804.html |format=interview, Z Magazine |accessdate=2008-03-01] Phillips worked at the for the next eight years, then ran for the U.S. Senate as a candidate of Utah's in 1968. He received 2,019 votes (0.5%) in an election won by Republican . He also ran for president of the United States in 1976 for the Do-Nothing Party. [cite web |last=Hawthorn |first=Tom |title=Unapologetic Wobbly folk singer found a second home in Canada |format=obituary, |url=http://www.theglobeandmail.com/servlet/story/LAC.20080616.OBPHILLIPS16/TPStory/Obituaries/?pageRequested=1 |accessdate=2008-06-16]

Phillips met folk singer in the early 1950s, and remained a close friend of hers. It was Sorrels who started playing the songs that Phillips wrote, and through her his music began to spread. After leaving Utah in the late 1960s, he went to , New York, where he was befriended by the folk community at the coffee house, where he became a staple performer throughout that decade.

Phillips was a proud member of the Industrial Workers of the World (IWW or Wobblies). His view of unions and politics were shaped by his parents, especially his Mom who was a labor organizer for the CIO. But Phillips was more of an Christian anarchist and a pacifist, so found the modern-day Wobblies to be the perfect fit for him, an iconoclast and artist. In recent years, perhaps no single person did more to spread the Wobbly gospel than Phillips, whose countless concerts were, in effect, organizing meetings for the cause of labor, unions, anarchism, pacifism, and the Wobblies. He was a tremendous interpreter of classic Wobbly tunes including "Hallelujah, I'm a Bum," "Preacher and the Slave," and "Bread and Roses."

An avid , Phillips recorded several albums of music related to the railroads, especially the era of steam locomotives. His first recorded album, "Good Though!", is an example, and contains such songs as "" and "Queen of the Rails" as well as what may be his most famous composition, "Moose Turd Pie" [cite web |last=Phillips |first=Bruce |title=Moose Turd Pie |url=http://www.utahphillips.org/stuff/mooseturdpie.mp3 |format=mp3 |accessdate=2008-01-12] wherein he tells a of his work as a repairing track in the desert.

In 1991 Phillips recorded, in one take, an album of song, poetry and short stories entitled "I've Got To Know", inspired by his anger at the first . The album includes "Enola Gay," his first composition written about the United States' atomic attack on .

Phillips was a mentor to . He recorded songs and stories with on a CD called "The Long Memory" (1996), originally a college project from . recorded two CDs, "" (1996) and "" (1999), with him. [cite web |last=Merritt |first=Stephanie |title=Life Support |url=http://observer.guardian.co.uk/life/story/0,,476493,00.html] He was nominated for a for his work with Ani DiFranco. His "Green Rolling Hills" was made into a country hit by , and "The Goodnight-Loving Trail" became a classic as well, being recorded by , , and others.

Though known primarily for his work as a concert performer and labor organizer, Phillips also worked as an archivist, dishwasher, and warehouse-man.

In his personal life, Phillips enjoyed varied hobbies. These included ; amateur ; ; (Asian, African, Mormon and world); futhark; ; ; and . He also enjoyed culinary hobbies, such as and .

He married Joanna Robinson on July 31, 1989, in Nevada City.Phillips became an elder statesman for the folk music community, and a keeper of stories and songs that might otherwise have passed into obscurity. He was also a member of the great Traveling Nation, the community of hobos and railroad bums that populates the Midwest United States along the rail lines, and was an important keeper of their history and culture. He also became an honorary member of numerous folk societies in the U.S.A. and Canada.

When Kate Wolf grew ill and was forced to cancel concerts, she asked Phillips to fill in. Suffering from an ailment which makes it more difficult to play guitar, Phillips hesitated, citing his declining guitar ability. "Nobody ever came just to hear you play," she said. Phillips told this story as a way of explaining how his style over the years became increasingly based on storytelling instead of just songs. He was a gifted storyteller and monologist, and his concerts generally had an even mix of spoken word and sung content. He attributed much of his success to his personality. "It is better to be likeable than talented," he often said, self-deprecatingly.

Until it lost its funding, Phillips hosted his own weekly radio show, "Loafer's Glory: The Hobo Jungle of the Mind".

Phillips lived in for 21 years where he worked on the start-up of the Hospitality House, a homeless shelter, and the Peace and Justice Center. "It's my town. Nevada City is a primary seed-bed for community organizing."

In August 2007, Phillips announced that he would undergo to address his heart problems. [ cite web |last=Phillips |first=U.Utah |title=The Latest From FW Utah Phillips |url=http://www.iww.org/en/node/3587 |format=announcement |accessdate=2008-02-24 ] Later that autumn, Phillips announced that due to health problems he could no longer tour. [cite web |last=Phillips |first=Utah |title=Retirement Announcement |url=http://www.utahphillips.org/podcast/utah20071011.mp3 |format=mp3 |accessdate=2008-03-01] By January 2008, he decided against a .

Phillips died May 23 in , from complications of heart disease, at the age of 73. He was survived by his wife, sons, Duncan and Brendan, and a daughter, Morrigan. Following a private service, a public memorial was held on June 1, in Pioneer Park, in Nevada City. His service was officiated by Meghan Cefalu, a pastor. The night he died local newspapers reported an unusual . Those close to him remarked that he rode out of town on a .