Otsego County is a county located in the U.S. state of New York. The 2010 population was 62,259. The county seat is Cooperstown. The name Otsego is from a Mohawk word meaning "place of the rock."

For History of Otsego County before 1789 see Montgomery County. 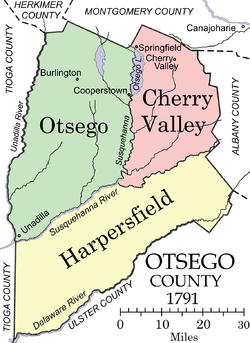 Map of Otsego County, at its formation 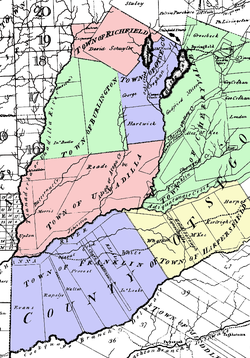 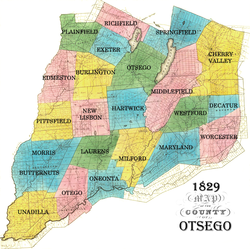 The formation of Otsego County

Otsego County was one of three counties split off from Montgomery (the other two being Herkimer, and Tioga). Otsego County was officially established on February 16, 1791, with Cooperstown as its county seat, although at the time the village of Cherry Valley was much larger. The original county consisted of three large townships:

The founding of new towns

By 1793, four towns had been added to the county by division of the existing towns:

The area of Otesgo County was reduced by a number of subsequent splits.

In 1795, a piece of Otsego County was joined with a portion taken from Albany County to create Schoharie County.

In 1797, a piece of Otsego County was joined with a portion taken from Ulster County to create Delaware County.

Otsego County is in central New York State, to the west of Albany, southeast of Utica, and northeast of Binghamton. The county is considered by some to belong to the Southern Tier region of New York State.

The Village of Cooperstown (home of James Fenimore Cooper), located at the south end of Otsego Lake, attracts many tourists to the Baseball Hall of Fame and the New York State Historical Association museums. Its primary industry is healthcare as it is home to Bassett Medical Center, the headquarters of Bassett Healthcare Network and its more than 2,000 employees. The City of Oneonta is the home of Hartwick College, the State University of New York at Oneonta, A.O. Fox Memorial Hospital, major retail activity, and numerous small businesses. The county as a whole remains relatively rural, with dairy farming a contributing industry that has consolidated employment in recent years, although production has remained steady.

Otsego county is a true swing county; it has chosen the winner of the presidency for the last three decades. In 2004 Otsego County voted 51-48 percent in favor of George W. Bush, and in 2008 they voted 51-47 in favor of Barack Obama. Democrats are prevalent in the City of Oneonta and Village of Cooperstown and Republicans are registered as a majority of voters in many of the surrounding towns. 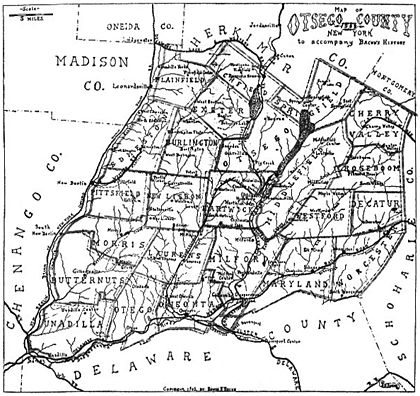