The Nelson with the new Bloch addition

The Nelson-Atkins Museum of Art is an art museum in Kansas City, Missouri, known for its neoclassical architecture and extensive collection of Asian art.

In 2007, Time magazine ranked the museum's new Bloch Building, # 1 on its list of "The 10 Best (New and Upcoming) Architectural Marvels" which considered candidates from around the globe.[1]

On September 1, 2010, Julián Zugazagoitia became the fifth Director of the museum.[2] 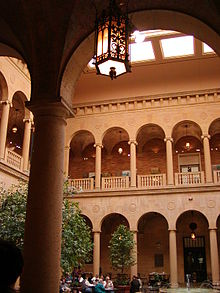 Cafe in the museum

The museum was built on the grounds of Oak Hall, the home of Kansas City Star publisher William Rockhill Nelson.[3] When he died in 1915, his will provided that upon the deaths of his wife and daughter, the proceeds of his entire estate would go to purchasing artwork for public enjoyment. This bequest was augmented by additional funds from the estates of Nelson's daughter, son-in-law and attorney.[4]

In 1911, former schoolteacher Mary Atkins (widow of real estate speculator James Burris Atkins) bequeathed $300,000 to establish an art museum. Through the management of the estate, this amount grew to $700,000 by 1927. Original plans called for two art museums based on the separate bequests[5] (with the Atkins Museum to be located in Penn Valley Park). However, trustees of the two estates decided to combine the two bequests along with smaller bequests from others to make a single major art institution.

The building was designed by prominent Kansas City architects Wight and Wight, who also designed the approaches to the Liberty Memorial and the Kansas governor's mansion, Cedar Crest. Ground was broken in July 1930, and the museum opened December 11, 1933. The building's classical Beaux-Arts architecture style was modeled on the Cleveland Museum of Art[4] Thomas Wight, the brother who did most of the design work for the building said:

We are building the museum on classic principles because they have been proved by the centuries. A distinctly American principle appropriate for such a building may be developed, but, so far, everything of that kind is experimental. One doesn’t experiment with two-and-a-half million dollars.[6]

When the original building opened its final cost was $2.75 million.[4] The dimensions of the six-story structure were 390 feet (120 m) long by 175 feet (53 m) wide making it larger than the Cleveland Museum of Art.

On the exterior of the building Charles Keck created 23 limestone panels depicting the march of civilization from east to west including wagon trains heading west from Westport Landing. Grillwork in the doors depict oak leaf motifs in memory of Oak Hall. The south facade of the museum is an iconic structure in Kansas City that looms over a series of terraces onto Brush Creek.

About the same time as the construction of the museum, Howard Vanderslice donated 8 acres (32,000 m2) to the west of the museum, across Oak Street, for the Kansas City Art Institute, which moved from the Deardorf Building at 11th and Main streets in downtown Kansas City.

As William Nelson, the major contributor, donated money rather than a personal art collection, the curators were able to assemble a collection from scratch. At the height of the Great Depression, the worldwide art market was flooded with pieces for sale, but there were very few buyers. As such, the museum's buyers found a vast market open to them. The acquisitions grew quickly and within a short time, the Nelson-Atkins had one of the largest art collections in the country.[citation needed]

Annually, from 1954 through 2000, the Jewel Ball, Kansas City's debutante ball, took place every June in the main hall to benefit both the museum and the Kansas City Symphony. The ball was moved temporarily to accommodate the expansion project at the museum and returned in 2008.

One of the original components of the building was a recreation of Nelson's oak paneled room from Oak Hall (and namesake of the estate). The room contained Nelson's red plush easy chair and bookcases. The room was dismantled in 1988 to make way for a photography studio. Museum officials said it would be restored when space was available. However the room was not restored after the Bloch addition.[8][4]

A panoramic view of the lawn in front of the Nelson Atkins Museum of Art, Summer 2008

The Thinker marked the north entrance prior to the addition of the Bloch Building when it was moved to the south side.

In 1993, the museum began to consider the first expansion plans since the completion of the unfinished areas in the 1940s. Plans called for a 55 percent increase in space and were finalized in 1999.

Architect Steven Holl won an international competition in 1999 for the design of the addition. Holl's concept was to build five glass towers to the east of the original building which he calls lenses. The lenses they top a 165,000-square-foot (15,300 m2) underground building known as the Bloch Building. It is named for H&R Block co-founder Henry W. Bloch. The Bloch building houses the museum's contemporary, African, photography, and special exhibitions galleries as well a new cafe, the museum's reference library, and the Isamu Noguchi Sculpture Court. The addition cost approximately $95 million and opened June 9, 2007. It was part of $200 million in renovations to the museum that included the Ford Learning Center which is home to classes, workshops, and resources for students and educators and opened in fall of 2005.

In the competition to design the addition, all the entrants except Holl proposed creating a modern addition on the north side of the museum which would have drastically altered or obscured the north facade which served as the main entrance to the museum. However Holl proposed placing the addition on the east side perpendicular to the main building. Holl's lenses now march down the east perimeter of the grounds.

While still on the drawing boards, Holl's plan met with considerable controversy. It was described as "grotesque, a metal box."[9] However reviews of the new structure have generally been raves:

The result is a building that doesn’t challenge the past so much as suggest an alternate world view that is in constant shift. Seen from the north plaza, the addition’s main entrance gently defers to the old building, the crystalline form suggesting a ghostlike echo of the austere stone facade. From there, the eye is drawn to the distinct yet interconnected translucent blocks, which are partly buried in the landscape.[10]

The museum has gone against traditional conservatorial thinking in allowing natural light from the lenses to illuminate its art work. Most of the exhibits in the addition are below ground with the 27 to 34-foot (10 m) glass towers above them. Officials say that advances in glass technology have allowed them to block most of the harmful ultraviolet rays that could damage the exhibited works.[10]

The custom glass planks were manufactured by Glasfabrik Lamberts and imported by Bendheim Wall Systems.[11]

Admission to the Museum is free every day and visitors may use any of seven entrances to access building. The main visitor's desk is in the Bloch Building. On the north side of the museum, A reflecting pool now occupies part of the J.C. Nichols Plaza on the north facade and contains 34 occuli to provide natural light into the parking garage below. The casting of The Thinker which occupied this space prior to the renovations has been relocated south of the museum. 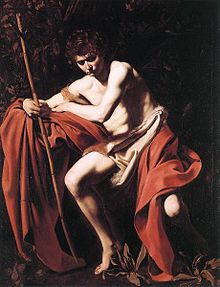 John the Baptist (John in the Wilderness), by Caravaggio, one of the works in the Nelson-Atkins's European painting collection

The museum is distinguished (and widely celebrated) for its extensive collection of Asian art, especially that of Imperial China. Most of it was purchased for the museum in the early 20th century by Laurence Sickman, then a Harvard fellow in China. The museum has one of the best collections of Chinese antique furniture in the country. In addition to Chinese art, the collection includes pieces from Japan, India, Iran, Indonesia, Korea, and Southeast, and South Asia.

Outside on the museum's immense lawn, the Kansas City Sculpture Park contains the largest collection of monumental bronzes by Henry Moore in the United States. The park also includes works by Alexander Calder, Auguste Rodin, George Segal and Mark di Suvero, among others. Beyond these, the park (and the museum itself) is well known for Shuttlecocks, a four-part outdoor sculpture of oversize badminton shuttlecocks by Claes Oldenburg and Coosje van Bruggen.

In addition, the museum also has collections of European and American sculpture, decorative arts and works on paper, Egyptian art, Greek and Roman art, modern and contemporary paintings and sculpture, pre-Columbian art, and the art of Africa, Oceania and the Americas. As well, the museum houses a major collection of English pottery and another of miniature paintings.