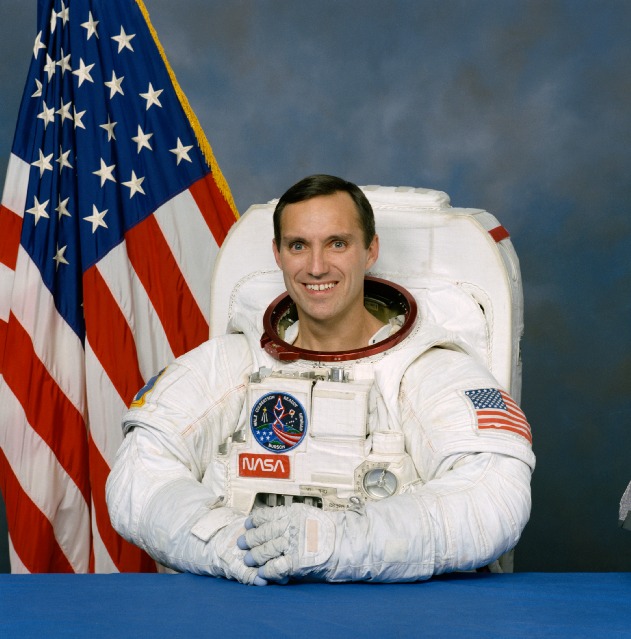 Born , in . Married to the former Pamela J. Glady of . They have two children. He enjoys and , , and was the lead singer for Max Q, a rock-n-roll band comprising astronauts.

From 1979 to 1982, Walz was responsible for analysis of radioactive samples from the Atomic Energy Detection System at the 1155th Technical Operations Squadron, , California. The subsequent year was spent in study as a Flight Test Engineer at the USAF Test Pilot School, , California. From January 1984 to June 1987, Walz served as a Flight Test Engineer to the Combined Test Force at Edwards Air Force Base, where he worked on a variety of F-16C airframe avionics and armament development programs. From July 1987 to June 1990, he served as a Flight Test Manager at Detachment 3, Air Force Flight Test Center.

Discovery (-22, 1993). During the mission, the five-member crew deployed the U.S. Advanced Communications Technology Satellite (ACTS), and the Shuttle Pallet Satellite (SPAS) with NASA and German scientific experiments aboard. Walz also participated in a 7-hour space walk (EVA) to evaluate tools for the Hubble Space Telescope servicing mission. The mission was accomplished in 9 days, 22 hours, and 12 minutes.

Columbia (-23, 1994). STS-65 flew the second International Microgravity Laboratory (IML-2) spacelab module, and carried a crew of seven. During the 15-day flight the crew conducted more than 80 experiments focusing on materials and life sciences research in microgravity. The mission completed 236 orbits of the Earth, traveling 6.1 million miles, setting a new flight duration record for the Shuttle program.

Atlantis (-26, 1996). On STS-79 the six-member crew aboard Atlantis docked with the Russian station, delivered food, water, U.S. scientific experiments and Russian equipment, and exchanged NASA long duration crewmembers. During the mission, the Atlantis/Mir complex set a record for docked mass in space. STS-79 was the first flight of the double module, and landed at KSC after 10 days 3 hours and 13 minutes.

The crew launched on , aboard and docked with the on . During a 6-1/2 month stay aboard the Space Station, the crew of three (two American astronauts and one Russian cosmonaut) performed flight tests of the station hardware, conducted internal and external maintenance tasks, and developed the capability of the station to support the addition of science experiments. The crew spent 196 days in space establishing a U.S. space flight endurance record for Carl Walz and crew mate Dan Bursch. Wearing the Russian Orlan space suit, Walz logged 11 hours and 52 minutes of EVA time in two separate spacewalks. The Expedition 4 crew returned to Earth aboard STS-111, with Endeavour landing at , California, on .