Ashgabat
For the cities in Iran, see Eshqabad.

Ashgabat (Turkmen: Aşgabat, Persian: عشق آباد, Russian: Ашхабад, also Ashkhabad in transliteration from Russian (literally, Persian meaning: "City of Love") or formerly Poltoratsk between 1919–1927) is the capital and largest city of Turkmenistan, a country in Central Asia. It has a population of 695,300 (2001 census estimate), 2009 estimates around 1 million people in Ashgabat, and is situated between the Kara Kum desert and the Kopet Dag mountain range. Ashgabat has a primarily Turkmen population, with ethnic minorities of Russians, Armenians, and Azeris. It is 250 km from the second largest city in Iran, Mashhad. 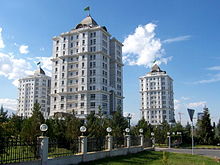 Ashgabat is Aşgabat in Turkmen, Ашхабад (Ashkhabad) in Russian, and عشق‌آباد (UniPers: Ešq-âbâd) in Persian. From 1919 until 1927, the city was renamed Poltoratsk after a local revolutionary. Before 1991, the city was usually spelled Ashkhabad in English, a transliteration of the Russian form, which was itself from the original Persian form. It has also been variously spelled Ashkhabat and Ashgabad. A folk etymology suggests that the name is a dialect version of the word of عشق (eshq meaning "love") and Persian آباد (ābād meaning "inhabited place" or "city", cognate to the English word "abode"), and hence loosely translates as "the city of love" or "the city that love built".[citation needed] 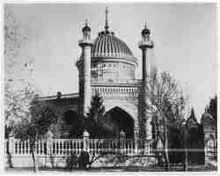 The first Bahá'í House of Worship was built in Ashgabat. 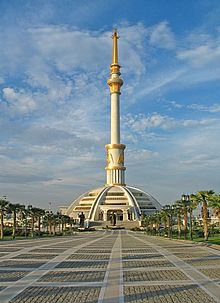 Ashgabat is a relatively young city, growing out of a village of the same name established by Russian officers in 1881. It is not far from the site of Nisa, the ancient capital of the Parthian Empire, and it grew on the ruins of the Silk Road city of Konjikala, which was first mentioned as a wine-producing village in 2nd century BCE and was leveled by an earthquake in 1st century BCE (a precursor of the 1948 Ashgabat earthquake). Konjikala was rebuilt because of its advantageous location on the Silk Road and it flourished until its destruction by Mongols in the 13th century CE. After that it survived as a small village until Russians took over in the 19th century.[1][2]

In 1869, Russian soldiers built a fortress on a hill near the village, and this added security soon attracted merchants and craftsmen to the area. Ashgabat remained a part of Persia until 1881, when it was ceded to Tsarist Russia under the terms of Akhal Treaty. Russia chose to develop Ashgabat as a regional center due to its proximity to the border of British-influenced Persia. It was regarded as a pleasant town with European style buildings, shops and hotels. In 1908, the first Bahá'í House of Worship was built in Ashgabat. It was badly damaged in the 1948 earthquake and finally demolished in 1963.[3] The community of the Bahá'í Faith in Turkmenistan was largely based in Ashgabat.

Soviet rule was established in Ashgabat in December 1917. However in July 1918 a coalition of Mensheviks, Social Revolutionaries and Tsarist former officers of the Imperial Russian Army revolted against the Bolshevik rule emanating from Tashkent and established the Ashkhabad Executive Committee. After receiving some support (but even more promises) from General Malleson, the British withdrew in April 1919, and the Tashkent Soviet resumed control of the city and in July 1919, when the city was renamed Poltoratsk (Полторацк) after a local revolutionary.[4] The name Ashgabat was restored in 1927 after the establishment of Turkmen SSR as a Soviet republic, though it was usually known by the Russian form Ashkhabad (Russian: Ашхабад). From this period onward, the city experienced rapid growth and industrialisation, although this was severely disrupted by a major earthquake on October 6, 1948. An estimated 7.3 on the Richter scale, the earthquake killed 110-176,000[5][6][7] (2/3 of the population of the city), although the official number announced by Soviet news was only 40,000.[8] 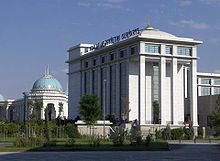 Ashgabat is primarily a government and administrative centre. The principal industries are cotton textiles and metal working. It is a major stop on the Trans-Caspian railway. Every Sunday, the Tolkuchka Bazaar in the suburbs thrives, selling a massive range of commodities.

The city is served by Ashgabat Airport. Turkmenistan Airlines has its headquarters in the city.[10]

The Ertugrul Gazi Mosque in Ashgabat named after Ertuğrul

Museums include the Turkmen Fine Arts Museum and Turkmen Carpet Museum, noted for their impressive collection of woven carpets as well as a Turkmen history museum and the Ashgabat National Museum of History, which displays artifacts dating back to the Parthian and Persian civilizations. The Academy of Sciences of Turkmenistan is an important institute of higher learning. Large mosques include the Azadi Mosque (which resembles the Blue Mosque in Istanbul), the Khezrety Omar Mosque, and the futuristic Iranian Mosque. Ashgabat was also home to the Arch of Neutrality, a 250-foot-tall tripod crowned by a golden statue of late president Saparmurat Niyazov (also known as Turkmenbashi, or leader of all Turkmen). The 50-foot-high statue, which rotated in order to always face the sun during daylight hours, was removed on August 26, 2010 after Niyazov’s successor, current President Gurbanguly Berdimuhamedov, made it clear earlier in the year that the statue was going to be taken out of Ashgabat’s parliament square.[14]