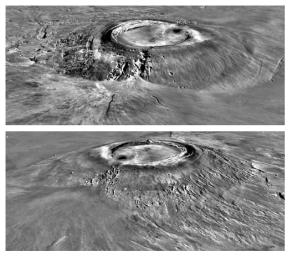 Arsia Mons is the southernmost of three s (collectively known as ) on the bulge near the of the Mars. To its north is , and north of that is . The tallest mountain in the , , is to its northwest. Its name comes from a corresponding on a map by , which he named in turn after the legendary Roman forest of .

A repeated weather phenomenon occurs each year near the start of southern winter over Arsia Mons. Just before southern winter begins, sunlight warms the air on the slopes of the volcano. This air rises, bringing small amounts of dust with it. Eventually the rising air converges over the volcano's caldera and the fine blown up from the volcano's slopes coalesces into a spiraling cloud of dust that is thick enough to observe from orbit. The spiral dust cloud over Arsia Mons repeats each year, but observations and computer calculations indicate it can only form during a short period of time each year. Similar spiral clouds have not been seen over the other large Tharsis volcanoes, but other types of clouds have been seen. The spiral dust cloud over Arsia Mons can tower 15 to 30 kilometers (9 to 19 miles) above the volcano. [ [http://photojournal.jpl.nasa.gov/catalog/PIA04294 Catalog Page for PIA04294 ] ]

The caldera of Arsia Mons was formed when the mountain collapsed in on itself after its reservoir of was exhausted. There are many other geologic collapse features on the mountain's flanks. [ [http://photojournal.jpl.nasa.gov/catalog/PIA03799 Catalog Page for PIA03799 ] ]

From day to night, temperatures of the circular features change only about one-third as much as the change in temperature of surrounding ground. While this is more variable than large caves on Earth, it is consistent with them being deep pits. However, due to the extreme altitude, it is unlikely that they will be able to harbour any form of Martian life. [cite web|url=http://www.jpl.nasa.gov/news/news.cfm?release=2007-106|title=NASA Orbiter Finds Possible Cave Skylights on Mars|accessdate=2007-09-22|publisher=]

A more recent photograph of one of the features shows sunlight illuminating a side wall, suggesting that it may simply be a vertical pit rather than an entrance to a larger underground space. [cite news|url=http://space.newscientist.com/article/dn12566-strange-martian-feature-not-a-bottomless-cave-after-all.html| title=Strange Martian feature not a 'bottomless' cave after all|date= 2007-08-30|publisher=NewScientist.com news service| first=David|last=Shiga] Nonetheless, the darkness of this feature implies that it must be at least 78 metres deep.