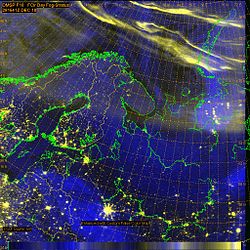 The Defense Meteorological Satellite Program (DMSP) monitors meteorological, oceanographic, and solar-terrestrial physics for the United States Department of Defense. The program is now run by the National Oceanic and Atmospheric Administration.[1] The (originally classified) mission of the satellites was revealed in March 1973. They provide cloud cover imagery from polar orbits that are sun-synchronous at nominal altitude of 450 nautical miles (830 km).[2] 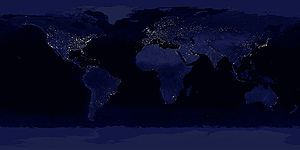 During the 1960s, one of most important projects the United States civil space program was involved in and dealt with meteorology and weather forecasting. Unbeknownst to many, the U.S. military services were also starting up a weather satellite program. This program, the DMSP, would relay important weather and climate data to the warfighter for more effective military operations. From the onset of the DMSP program, knowledge of its existence was limited to 'need-to-know' personnel. The United States Congress had assigned a substantial budget towards the civil weather satellite program; if knowledge of a second military program came out, it would have been hard for the military to justify it.

Initial operations of early DMSP systems provided radio return of cloud-cover imagery for planning of US high-resolution photographic reconnaissance and surveillance missions, which utilized film-return systems. DMSP satellites operated in a sun-synchronous orbit; passing over the north and south poles, the satellite would 'see' different strips of the Earth at the same local time each day. The DMSP satellites had periods of roughly 101 minutes, so they would orbit the Earth 14.3 times in 24 hours. This period combined with the sun-synchronous orbit would have the satellite pass over the whole surface of the planet twice a day.

The images acquired were relayed to the Earth and received by two command and readout stations established at retired Nike missile sites located near Fairchild Air Force Base, Washington and Loring Air Force Base, Maine.[3] From these sites, the images were then sent to Air Force Global Weather Central (AFGWC) located at Offutt Air Force Base, Nebraska. Images would then be processed, forming a mosaic representing the cloud patterns that were observed from the orbiting satellites. Meteorologists could then provide flight crews and other commanders with up-to-date observations for their particular missions. Further advancements enabled data to be collected in the visual spectrum down to a half-moonlit scene. Infrared processing enabled night viewing. Other enhancements increased onboard processing, this includes multiple onboard computers and expanded power requirements.

Now in its fifth decade of service, the DMSP has proven itself to be a valuable tool in scheduling and protecting military operations on land, at sea, and in the air. In December 1972, DMSP data was declassified and made available to the civil/scientific community. On June 1, 1998 the control and maintenance of the satellites were transferred to NOAA in order to reduce costs.

DSMP was initially known as Program 35. The first successful launch of a Program 35 spacecraft used a Scout X-2 rocket lifting off from Point Arguello near Vandenberg Air Force Base (VAFB) on 1962-08-23.[4][5] This was P35-2; the earlier P35-1 launch on 1962-05-24 had failed to reach orbit.[6] All five Program 35 launch attempts using Scout rockets, including the two successes, were made from VAFB SLC-5. Other early launches were conducted using Thor launch vehicles, with Altair or Burner II upper stages. Program 35 had by this time been renamed the Data Acquisition and Processing Program, and the DAPP acronym is sometimes used for these satellites.[7] Eight satellites were launched using Atlas E launch vehicles between 1982 and 1995. Three were launched aboard Titan II vehicles between 1997 and 2003. One has been launched on a Delta IV rocket.

The next DMSP launch will be of the F18 satellite, scheduled for launch from Vandenberg aboard an Atlas V on October 18, 2009.[8] United Launch Alliance plans to use the DMSP-18 mission to flight-test centrifugal propellant settling as a cryogenic fuel management technique that might be used in future propellant depots.[9][dated info]

The Special Sensor Ultraviolet Limb Imager (SSULI) launched on DMSP F-18. SSULI was developed by the Spacecraft Engineering Department and Space Science Division of the Naval Research Laboratory. SSULI observations yield altitude profiles of the ionosphere and neutral atmosphere over the wavelength range of 80 nanometers (nm) to 170 nm. These observations will be used by the Air Force Weather Agency.[13]