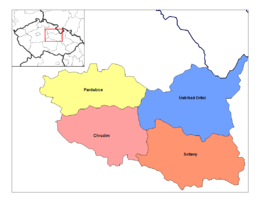 Pardubice Region (Czech: Pardubický kraj) is an administrative unit (Czech: kraj) of the Czech Republic, located mainly in the eastern part of its historical region of Bohemia, with a small part in northwestern Moravia. It is named after its capital Pardubice. "There are a total of 452 municipalities in the region. Among these, there are 15 municipalities with extended powers and 26 municipalities with a delegated municipal office. Thirty-two of the municipalities are classified as towns. The regional central offices are in Pardubice.[1]

The region's GDP has risen the most in the agriculture section. Small, yet noticeable figures of GDP have also increased in transport, building, real estate, agriculture and tourism..

Industry and commercial public services are the basis of Pardubice's economy. General engineering, textiles, clothing, and leather processing are the strongest industrial branches.

"As far as transport in the region is concerned, there are 500 kilometres of train lines. The most important one is part of the international train line E040 (Paris - Nurnberg - Prague - Vienna) and also of the E061 (Berlin - Prague - Brno - Vienna)."[3] The public international airport in Pardubice is significant. Operating for both public and military flights, its listed in the category of the top 5 airports in the Czech Republic. Road networks make up over 3,600 km that transverse throughout the region. The I/37 connection to the I/17 is noted as the most important.

Agriculture plays a big role covering about 60% of the land.

Attractions from natural tourist spots (such as the Železné Mountains and the Orlické Mountains) to historical monuments, mostly of medieval castles established since the 13th century all encourage tourism to the region. "The most significant historical monuments in the region are connected with the noble Pernštejn family, from Moravia, who had two huge castles built, at Litice on the Orlice and on Kunětická hora near Pardubice."[4]

Registered unemployment as of 2002 reached nearly 9% of the population. About 52% of those are women, and 44% are skilled workers.