For other meanings of this and similar words, see Nunchaku (disambiguation). 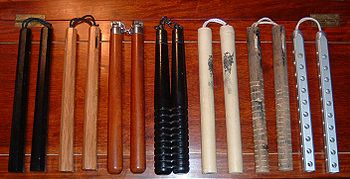 Nunchaku (ヌンチャク, nunchaku?) is a traditional Okinawan weapon consisting of two sticks connected at their ends with a short chain or rope.

The Japanese word nunchaku is the Kun'yomi reading of the Kanji term for a traditional Chinese two section staff.[1]

In the English language nunchaku are often referred to as "nunchucks" or "nunchuks".[2] This expression is so common it is also attached to the Wii console's Wii Nunchuk controller.

The popular belief is that nunchaku were originally a short Southeast Asian flail[3] used to thresh rice or soybeans (that is, separate the grain from the husk). It is possible that it was developed in response to the moratorium on edged weaponry under the Satsuma daimyo after invading Okinawa in the 17th century, and that the weapon was most likely conceived and used exclusively for that end, as the configuration of actual flails and bits are unwieldy for use as a weapon. Also, peasant farmers were forbidden conventional weaponry such as arrows or blades so they improvised using only what they had available say, farm tools such as the sickle.

However, it seems that mythology surrounding the origins of nunchaku has little historical accuracy. Unlike Okinawan rice flail (utzu), original nunchaku had curved arms, resembling an Okinawan horse bit (muge), which gave rise to the theory that nunchaku were originally a horse bridle. Yet another theory asserts that it was adapted from an instrument carried by the village night watch, made of two blocks of wood joined by cord. The night watch would hit the blocks of wood together to attract people's attention and then warn them about fires and other dangers.[4] According to Chinese folklore, nunchaku are a variation of the two section staff.[5]

Associating nunchaku and other Okinawan weapons with rebellious peasants is probably a part of romantic imagery. Martial arts on Okinawa were practiced exclusively by aristocracy (kazoku) and "serving nobles" (shizoku) but were prohibited among commoners (heimin). Furthermore, Okinawan disarmament was never total; nobles were still allowed to carry their swords and members of the royal family and princes were even allowed to have firearms for hunting.[6] Whatever its origins were, the nunchaku were not a popular weapon, evidenced by the fact that no known traditional nunchaku kata exists. This was possibly a result of its lack of efficiency against weapons such as the sword.[7]

Parts of the nunchaku 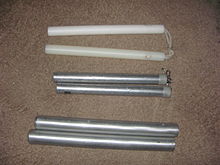 Nunchaku are two sections of wood connected by a cord (himo) or chain (kusari), though variants may include additional sections of wood and chain. In China, the striking stick is called "dragon stick" ("龍棍") while the handle is called "yang stick" ("陽棍"). Chinese nunchaku tend to be rounded, whereas the Okinawan version has an octagonal cross-section (allowing one edge of the nunchaku to make contact on the target increasing the damage inflicted). The ideal length of each piece should be long enough to protect the forearm when held in a high grip near the top of the shaft. Both ends are usually of equal length, although asymmetrical nunchaku exist. The ideal length for the connecting rope/chain is just enough to allow the user to lay it over his or her palm, with the sticks hanging comfortably and perpendicular to the ground. Weight balance is extremely important; cheaper or gimmicky nunchaku (such as glow-in-the-dark ones) are often not properly balanced, which prevents the performer from doing the more advanced and flashier 'low-grip' moves, such as overhand twirls. The weight should be balanced towards the outer edges of the sticks for maximum ease and control of the swing arcs.

Traditional nunchaku are made from a strong, flexible hardwood such as oak, loquat or pasania. Originally, the wood would be submerged in mud for several years, where lack of oxygen and optimal acidity prevented rotting and caused the wood to harden. The rope is made from horsehair. Finally, the wood is very finely sanded and rubbed with an oil or stain for preservation. Today, such nunchaku are often varnished or painted for display purposes. This practice tends to reduce the grip and make the weapon harder to handle, and so is not advised for a combat weapon.

Modern nunchaku can be made from any suitable material, such as wood, metal, or almost any plastic, fiberglass or other hard substance. Toy and practice nunchaku are commonly covered with foam to prevent self-injury or the injury of others. It is not uncommon to see modern nunchaku made from light metals such as aluminum. Modern equivalents of the rope are nylon cord or metal chains on ball bearing joints. Simple nunchaku may be easily constructed from wooden dowels and a short length of chain.

There are some alternative nunchaku, made solely for sporting such as:

There are also some types of nunchaku with no sportive use noted, such as:

Nunchaku are most commonly used in Okinawan kobudo and karate, but it is also used in eskrima (accurately, the tabak-toyok, a similar though distinct Philippine weapon is used, as opposed to the Okinawan nunchaku), taekwondo and hapkido. Its application is different in each style. The traditional Okinawan forms use the sticks primarily to grip and lock. Filipino martial artists use it much the same way they would wield a stick, so striking is given precedence. Korean systems combine offensive and defensive moves so both locks and strikes are taught.

Nunchaku are usually wielded singly but they can also be paired. It can be whirled around, using its hardened handles for blunt force as well as wrapping its chain around an attacking weapon to immobilise or disarm the opponent. Nunchaku training has been noted to increase hand speed, correct posture, and condition the hands of the practitioner so it makes a useful training weapon.

There are some disciplines that combine nunchaku with unarmed techniques:

Freestyle nunchaku is a modern style of performance art using nunchaku as a visual tool rather than as a weapon. With the growing prevalence of the Internet the availability of nunchaku has increased greatly, combining this with the popularity of other video sharing sites many people have become interested in learning how to use the weapons for freestyle displays. Freestyle is one discipline of competition held by the World Nunchaku Association. Some modern martial arts teach the use of nunchaku as it may help students improve their reflexes, hand control, and other skills.

Since the 1980s, there have been various international sporting associations that organise the use of nunchaku as a contact sport.[14][15] Current associations usually hold semi-contact fights where severe strikes are prohibited as opposed to contact fights. Full-Nunch matches, on the other hand, are limitations-free on the severity of strikes and knockout is permissible.[16] 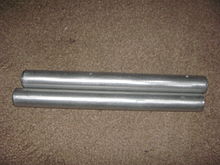 Among the most dangerous nunchuck variants are those composed of solid metal bars, shown here unlinked

Possession of Nunchaku is illegal in a number of countries including Norway, Canada[20], Russia and Spain. It is considered a prohibited weapon.[21] In Germany, Nunchaku have been illegal since April 2006, when they were declared a strangling weapon.[22][23]

In the United Kingdom for many years it was thought legal for anyone over the age of 18 to buy and possess nunchaku, although public possession is not allowed unless transporting between a place of training or private addresses. However, following a case brought by Strathclyde Police and the Procurator Fiscal heard at Glasgow Sheriff Court on 10 February 2010, a Sheriff ruled that nunchaku fell into the category of a prohibited weapon as defined by the Criminal Justice Act 1988 (Offensive Weapons) Order 1988 Section 141 (n). If, and only if it were upheld by a senior court, this ruling would have the effect of making it an offence to import, manufacture or sell nunchaku in the UK. It would also criminalise hundreds of thousands of martial arts enthusiasts who own a set of nunchaku. Their usage was, in the 1990s, censored from UK rebroadcasts of American children's TV shows such as Teenage Mutant Ninja Turtles cartoons and films.[24] The UK version of the Soul Blade videogame was also edited, replacing Li-Long's nunchakus with a three-sectioned staff. In Hong Kong, it is illegal to possess metal or wooden nunchaku connected by a chain. It can be possessed by obtaining a license from the police as a martial arts instructor. Any rubber nunchaku are allowed. However, possession of nunchaku in Mainland China is legal.

Legality in Australia is also determined by individual state laws. In New South Wales, the weapon is on the restricted weapons list, and thus can only be owned with a permit.

Legality in the United States varies at state level, e.g., personal possession of nunchaku is illegal in New York[25], Arizona[26] California[27] and Massachusetts[28], but in other states possession has not been criminalized. In New York, attorney Jim Maloney has brought a federal constitutional challenge to the statutes that criminalize simple in-home possession of nunchaku for peaceful use in martial-arts practice or legal home defense. The court dismissed Maloney's Second Amendment claim based on prior case law that the Second Amendment applied only to Federal action, and that decision was affirmed by the United States Court of Appeals for the Second Circuit. However, on June 29, 2010, the U.S. Supreme Court granted a writ of certiorari, vacated the decision of the Second Circuit and sent it back for "further consideration" in light of the Supreme Court's decision in McDonald v. Chicago, which held that the right of an individual to "keep and bear arms" protected by the Second Amendment is made applicable to the states by the Due Process Clause of the Fourteenth Amendment. [29]

The nunchaku has been a popular weapon in movies related to martial arts, particularly popularized in modern culture through Bruce Lee movies. The nunchaku can be seen in many different types of media.

In television the American TV show Deadliest Warrior, the episode "Yakuza vs. Mafia" shows the Yakuza's short range weapon as a pair of nunchaku, also in the television series Charmed, Billie Jenkins often used to practice with a nunchaku made of metal.

In movies Bruce Lee famously uses the nunchaku in his films including Fist of Fury, Game of Death, Way of the Dragon, and Enter the Dragon.

In manga Might Guy and his student Rock Lee, from the manga series Naruto uses the nunchaku as a weapon. Franky from One Piece is also shown using a variant of nunchaku, but given his inhuman strength, it is made up of two full-sized stone pillars chained together

In anime Might Guy, from the anime series Naruto, uses the nunchaku as a weapon, as does his student, Rock Lee who is a reference or tribute to Bruce Lee and his use of the weapon.

In video games Maxi and Li-Long from the Soul Series of weapon-based fighting games always uses a variety of nunchaku. Also Selphie Tilmitt in the video game Final Fantasy VIII wields the nunchaku in battle. Ling Tong of the Dynasty Warriors series uses nunchaku in the majority of his incarnations.

In children's games the Lego Ninjago golden weapon of lightning is a nunchaku, it is used by Jay.