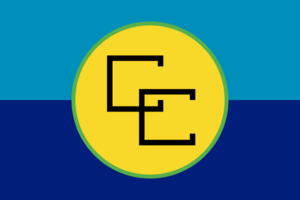 The Caribbean Community (CARICOM), is an organization of Caribbean nations and dependencies. Caricom's main purposes are to promote economic integration and cooperation among its members, to ensure that the benefits of integration are equitably shared, and to coordinate foreign policy. Its major activities involve coordinating economic policies and development planning; it also devises and institutes special projects for the less-developed countries within its jurisdiction. It also operates as a regional common market for many of its members (Caricom Single Market). It also operates the Caribbean Court of Justice (CCJ), which serves as the final court of appeal for many Caricom members and also handles regional trade disputes.

The Caribbean Community (CARICOM) has become unofficially multilingual in practice with the addition of Dutch-speaking on , and , where French and are spoken, on , . In 2001, the heads of government signed a Revised Treaty of Chaguaramas thus clearing the way for the transformation of the Common Market aspect of CARICOM. Part of the revised treaty includes the establishment and implementation of the .

CARICOM replaced the 1965–1972 (CARIFTA), which had been organized to provide a continued economic linkage between the English-speaking countries of the following the dissolution of the which lasted from , to , .

From March 2004, Haiti's participation in CARICOM was suspended by its interim Prime Minister, in response to the visit of (the ousted President) to Jamaica. [ [http://www.trinidadandtobagonews.com/forum/webbbs_config.pl/noframes/read/1721 Haiti suspends ties with CARICOM] ] Haiti's membership had been effectively suspended though since , as CARICOM refused to recognize the new interim government. In early June 2006, Haiti was readmitted as a full member of the CARICOM, and Haitian President gave the opening address at the organization's Council of Ministers meeting in July.

In July 1999, Anguilla once again became involved with CARICOM when it gained associate membership. Prior to this, Anguilla had briefly been a part of CARICOM (1974-1980) as a constituent of the full member state of Saint Christopher-Nevis-Anguilla.

Also in 2005, the Netherlands Antilles made an official request for the status of associate membership. [ [http://www.caribbeannetnews.com/cgi-script/csArticles/articles/000030/003019.htm Netherlands Antilles policy towards the Caribbean is one of committed neighbour] ] It is not known how the future will affect the current observer status or the requested associate membership status of the islands, such as , in the future though has announced [http://www.nationnews.com/story/331831299788307.php] , [http://www.caribbeannetnews.com/cgi-script/csArticles/articles/000032/003215.htm] it wants to continue deepening ties with the CARICOM bloc.

In 2007, the U.S. Virgin Islands government announced it would begin seeking ties with CARICOM. [ [http://www.virginislandsdailynews.com/index.pl/article_home?id=17605699 USVI, BVI leaders discuss areas of mutual interest] ] It is not clear what membership status the USVI would obtain should they join CARICOM. It is possible the USVI would obtain observer status, considering fellow U.S. Caribbean territory Puerto Rico's current observer status.

After the revised Treaty of Chaguaramas, CARICOM reorganised itself into a state-like Government structure made up of the following branches:

Comprising of a rotating prime ministerial Chairmanship of CARICOM (Head of CARICOM), the CARICOM Secretary General (Chief Executive) and the CARICOM Headquarters secretariat (Chief Administrative Organ). There is also a quasi Cabinet of individual Heads of Government who are given specific responsibility or portfolios for overall regional development and integration. [ [http://www.caricom.org/jsp/community/regional_portfolio.jsp?menu=community Regoinal Portfolios of CARICOM Heads of Government] ] The term of office of the Secretary-General is 5 years, which may be renewed.

The Community Council: The Council consists of Ministers responsible for Community Affairs and any other Minister designated by the Member States in their absolute discretion. It is one of the principal organs (the other being the Conference of the Heads of Government) and is supported by four other organs and three bodies.

*The Legal Affairs Committee: provides legal advice to the organs and bodies of the Community (related: [http://www.caricomlaw.org CARICOMLaw] )
*The Budget Committee: examines the draft budget and work programme of the Secretariat and submits recommendations to the Community Council; and,
*The Committee of Central Bank Governors: provides recommendations to the COFAP on monetary and financial matters

The Caribbean Court of Justice (CCJ) will act as the original jurisdiction for settlement of disputes on the functioning of the Caribbean (CARICOM) Single Market and Economy (CSME), as well as serving as an appellate of last resort for member states which have severed their country's ties with the Privy Council in , . The CCJ is based in , . Many member states however, continue to utilize the Privy Council as their final appellate court and three member states do not use the CCJ for either its original jurisdiction or its appellate jurisdiction because they have either not signed the Revised Treaty of Chaguaramas (the Bahamas and Haiti) or are awaiting instruments of entrustment in order to ratify the Revised Treaty (Montserrat).

* - Consisting of the various heads of Government from each member state

* - Ministerial responsibilities for specific areas, for example the Standing Committee of Ministers responsible for Health will consist of Ministers of Health from each member state

*
*The Secretariat is located in Georgetown, .----{|border="0" style="background:#efefef;"|- valign="top"
The goal statement of the CARICOM Secretariat is:"To provide dynamic leadership and service, in partnership with Community institutions and Groups, toward the attainment of a viable, internationally competitive and sustainable Community, with improved quality of life for all."----

Three countries—Barbados, Jamaica and Trinidad and Tobago—had originally set , as the date of signing the agreement relating to the (CSME). The ceremony had then been rescheduled to coincide with the inauguration of the new CARICOM-headquarters building in Georgetown, , but this was later postponed after a ruling by the London Privy council caused alarm to several Caribbean countries.

The prospect was that ten of the remaining twelve CARICOM countries would join the CSME by the end of 2005. The and were not expected to be a part of the new economic arrangement at that time. The CARICOM Secretariat maintains frequent contact with another organisation named the Organisation of Eastern Caribbean States (OECS), which represents seven Full members and two Associate members of CARICOM in the Eastern Caribbean. Many of the OECS countries are seeking to maintain themselves as a micro-economic grouping within CARICOM.

The treaty finally went into effect on , with , , , , and as the first full members. On July 3, 2006, the total membership was brought up to twelve when , , , , , and became full members. The of is seeking permission from the to become a part of the ; will not join the market initially because of its difficult internal political situation; and the will not join because of local opposition to a provision that allows skilled workers to move more easily among nations.

On Friday, , , the Republic of became the first full member state to officially launch the new bloc "CARICOM Passport". The new passports boast having better security and are also machine-readable. The full member states of the Caribbean Community had agreed to establish a common passport in order to make intra-regional and international travel easier for their citizens. The passports are also thought to save additional costs for member states by using a similar cover design, the designs will also follow newly updated international standards on Passport design.

Antigua and Barbuda had announced that it would begin using the new CARICOM passport format by the middle of 2005.

Grenada planned to begin issuing the common passport in mid-2006, but started issuing them on , .

Barbados had planned to switch to the common format by late 2006, but then proposed to introduce it by , . Barbados launched the new common-format passport on , .

The Co-operative Republic of Guyana had also announced that it would begin to use the new CARICOM passport format by the middle of 2005, but the introduction was delayed and the new target date was set to July 2006. However, Guyana eventually officially launched the passport on . [ [http://www.op.gov.gy/stories/070706.html Office of the President of Guyana ] ]

The CARICOM passport creates awareness that CARICOM nationals are nationals of the Community, as well as a specific country.

The expectation is that all the member states will have introduced the CARICOM passport by 2008 when the stock of their old passports is depleted.

Belize is to introduce the passport after its current stock is depleted, but ultimately by , .

Jamaica was expected to institute the passport by the end of 2007; However, this deadline elapsed,

The Bahamas has not launched the machine-readable passport, and intends to launch the e-passport on December 5th, 2007.

Antigua and Barbuda's design is to feature the country's Coat of Arms and country name as well as the CARICOM logo.

The passports for Suriname were created by the Canadian Banknote Company Ltd. (CBN) Under a five-year programme with a price tag of US$1.5 million. It is believed other member states of CARICOM will now soon follow with the introduction of their own branded version of the national 'CARICOM' Passport.

During the July 2006 CARICOM Summit, the various leaders reached an agreement on measures to ensure hassle-free movement for visitors to the , as well intelligence sharing and cooperation for the security of the event.

By , officials in Barbados announced that of 6 000+ CARICOM visas applied for thus far, about 5 000 had already been processed. The Barbados government went on with the announcement saying that the rest of the CARICOM visas would be processed soon. [http://www.cbc.bb/content/view/9357/10/] By , , shortly before the start of the Cricket World Cup, over 20,000 CARICOM visas had been issued

In February 2007 the CARICOM Heads of Government agreed to set up a Task Force to recommend a revised CARICOM Special Visa for the future, making any changes necessary from the experiences of the 3 month Single Domestic Space. This Task Force had its first meeting on in Trinidad and Tobago and reported to the July 2007 Meeting of CARICOM Heads of Government in Barbados. In addition, a paper will also be presented on the issue of how best to establish a rationalised Single Domestic Space to facilitate hassle-free travel within the region on a permanent basis.

At the 28th CARICOM Heads of Government Conference

From around the year 2000, the Caribbean Community (CARICOM) states have placed a new focus and emphasis on establishing s (FTAs) with local and international trading partners. This is practically done in collaboration with the (CRNM).

;Proposed
* CARICOM - : To be negotiated, after Canada finishes their CAFTA agreement.
* CARICOM/CARIFORUM - : On-going negotiation on the EPA ("Economic Partnership Agreement") [http://www.stabroeknews.com/index.pl/article_general_news?id=38354426]
* CARICOM - : Opened for discussions in May 2005

Note that the on-going negotiations with the EU over an Economic Partnership Agreement (EPA) involves all the CARICOM Member States (except Montserrat, which is not independent) plus the Dominican Republic grouped under the Caribbean Forum or CARIFORUM sub-grouping of the . At the end of these negotiations (begun in 2002 and due to end in 2007) there will be a new Free Trade Agreement that will replace the Lomé system of preferential access to the European market for the ACP from 2008. [ [http://www.bond.org.uk/networker/2004/oct04/epa.htm Economic Partnership Agreements] ]

13 of the 15 CARICOM countries have signed in 2005 the , an oil alliance with which permits them to purchase oil on conditions of preferential payment.

Comparison with other regional blocs