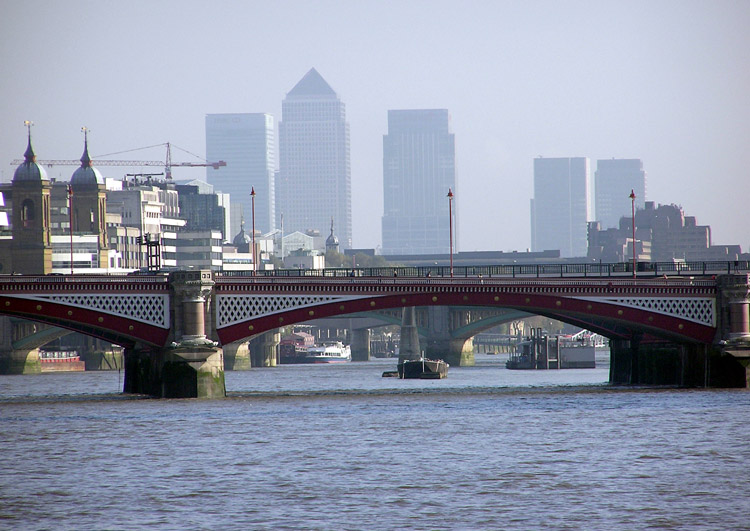 The first fixed crossing at Blackfriars was a convert|995|ft|m|0|lk=on long designed in an Italianate style by and constructed with nine semi-elliptical arches of Portland stone. Beating designs by and George Dance, it took nine years to build, opening to the public in 1769. It was the third bridge across the Thames in the then built-up area of London, supplementing the ancient , which dated from a generation earlier, and . It was originally named "William Pitt Bridge" (after the Prime Minister William Pitt) but was soon renamed after Blackfriars Monastery, a Dominican which once stood nearby.

The present bridge was completed in 1869 and consists of five wrought iron arches built to a design by . Cubitt also designed the adjacent rail bridge (now demolished) and it was a condition that the spans of the two bridges be aligned. It was built by P.A. Thom & Co. [ [http://thames.me.uk/s00100.htm Where Thames Smooth Waters Glide] ] and is owned and maintained by the , a charitable trust overseen by the . Due to the volume of traffic over the bridge, it was widened between 1907–10, from convert|70|ft|m|0 to its present convert|105|ft|m|0.

The bridge became internationally notorious in 1982, when the Italian banker was found hanged below one of its arches in what was originally believed to be a suicide, but is now officially regarded as a murder. [ [http://news.bbc.co.uk/1/hi/world/europe/1936830.stm "New tests "say Calvi was murdered"] 19 April 2002 (BBC News) accessed 8 April 2008]

On the piers of the bridge are stone carvings of water birds by . On the East (downstream) side (i.e. the side closest to the and ), the carvings show marine life and seabirds; those on the West (upstream) side show freshwater birds - reflecting the role of Blackfriars as the tidal turning point.

On the north side of the bridge is a statue of to whom the bridge was dedicated.

The bridge gave its name to which opened in 1864 before closing to passengers in 1885 following the opening of what is today the main . continued as a goods stop until 1964 when it was completely demolished, and much of it redeveloped into offices.

The empties into the Thames under the north end of Blackfriars Bridge.

The name was given to one of the s over the in 1945, by the Royal Engineers that built it.

In 's "", "Blackfriars Bridge" was named as the home of an unknown order of monks who held the key to an angelic prison. The bridge is also featured in the lyrics of the song "The Resurrectionist" by the . The song is about the work of resurrectionists operating in London in the 1830s. In 's "", Jacky is introduced as an orphan in early 19th-century London who lives with her orphan gang under Blackfriars Bridge. The bridge is mentioned in 's play "The Homecoming" when the character Max suggests that his brother, Sam, would have sex for a few pennies here.