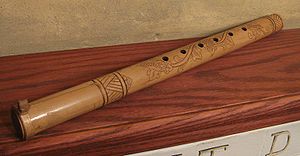 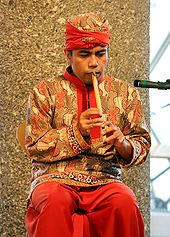 A suling or Seruling is an Indonesian bamboo ring flute. It is used in gamelan ensembles.

Depending on the regional genre, a suling can be tuned into different scales. Sulings can be found in the following regions:

Sulings are made mainly of 'tamiang' bamboo (Schizostachyum blumei, Nees), a long tube bamboo with a very thin surface. The head of suling, near a small hole, is circled with a thin band made of rattan or rotan to produce air vibration.

There are two factors that affect a fine suling's tone:

In the Sundanese region, a suling is used as

Sulings can have either 4 holes or 6 holes. The 6-holed Sundanese suling can play at least three different scales.

And below is the example of 'more realistic' view of finger positioning for the pelog degung scale.

The Suling can be many sizes