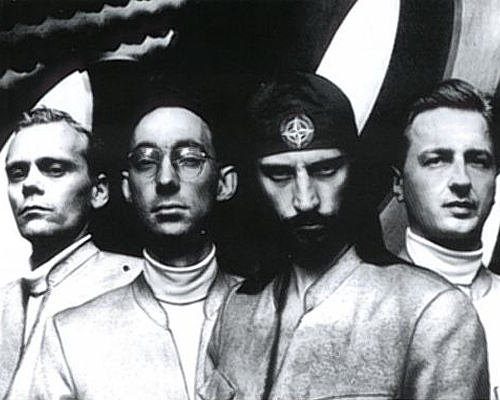 Laibach is a n avant-garde group, strongly associated with industrial, martial, and neo-classical musical styles. Laibach formed in , . Laibach represents the music wing of the "" (NSK) art collective, of which it was a founding member in 1984. The name "Laibach" is the German name for Slovenia's capital city, .

Laibach has frequently been accused of both and political stances due to their use of s and -style and also due to the Wagnerian influence found in some of their music, notably the thunder in "Sympathy for the Devil (Time for a Change)" and releases such as "Macbeth". They were also accused of being members of the neonationalism movement which reincarnates modern ideas of nationalism. When confronted with such accusations, Laibach are quoted as responding, "We are fascists as much as was a painter" .

Laibach is notorious for rarely stepping . Some releases feature artwork by the and early artist/satirist, . Laibach concerts have sometimes aesthetically appeared as political rallies. When interviewed, they answer in wry manifestos, showing a paradoxical lust and condemnation for authority.

Richard Wolfson wrote of the group:

Laibach's method is extremely simple, effective and horribly open to misinterpretation. First of all, they absorb the mannerisms of the enemy, adopting all the seductive trappings and symbols of power, and then they exaggerate everything to the edge of parody... Next they turn their focus to highly charged issues &mdash; the West's fear of immigrants from Eastern Europe, the power games of the EU, the analogies between Western and . [Wolfson, 2003

Laibach is also known for their cover versions, which are often used to subvert the original message or intention of the song—a notable example being their version of the song ("") by Opus, an Austrian arena rock band. In this example, Laibach recorded two new interpretations of the song, which they titled Leben Heißt Leben, and Opus Dei. The first of these two interpretations was the opening song on the Laibach album "Opus Dei" (1987), and was sung in German. The second version, Opus Dei, was promoted as a single, and its promotional video (which used the title "") was played extensively on American cable channel [Monroe, Alexei. Interrogation Machine: Laibach and NSK. MIT Press, 2005. p 231] . Opus Dei retained some of the original song's English lyrics, but was delivered in a musical style that left the meaning of the lyrics open to further interpretation by the listener. Whereas the original is a feel-good reggae anthem, Laibach's subversive interpretation twists the melody into a sinister, rolling military march. With the exception of the promotional video, the refrain is at one instance translated into German, giving an eerie example of the sensitivity of its lyrics to context.

Other notable covers include the entirety of the Beatles album "Let It Be" (1988)—with the exclusion of the title track—and their maxi-single "Sympathy for the Devil" (1988) which deconstructs the Rolling Stones song of the same name with seven different interpretations of the song. "Opus Dei"—itself entitled in apparent reference to their cover of Opus's reggae anthem "", the , and the eponymous Catholic organization—features a cover of Queen's "" with lyrics translated into German under the title "Geburt einer Nation", starkly revealing the ambiguity of lines like "One race one hope/One real decision". In "NATO" (1994), Laibach also memorably re-work Europe's anthem "The Final Countdown" as a epic.

In 2004, Laibach re-mixed the song "Ohne Dich" by in a significantly altered version. Unlike the solo male vocals in the Rammstein original, this re-mix features both male and female vocals (supplied by Laibach's Milan Fras and Mina Špiler from the band ), and the orchestral sound of the original has been supplemented—and in some sections even replaced—by a more electronic element. The lyrics of the song were also subtly altered, most noticeably in the chorus: the original version was "Ohne dich kann ich nicht sein" (roughly: "without you I cannot exist"), whereas Laibach's re-worked the chorus declares "Ohne mich kannst du nicht sein" (roughly: "Without me you cannot exist").

Although primarily a musical group, Laibach has sometimes worked in other media. In their early years, especially before the founding of Neue Slowenische Kunst (NSK), Laibach produced several works of visual art. A notable example was "MB 84 Memorandum" (1984) an image of a black that served as a way to advertise Laibach's appearances during a period in the 1980s when the government of Yugoslavia banned the name "Laibach". [cite web|url=http://www.artmargins.com/content/review/griffin.html|title=ARTMargins - Winifred M. Griffin: Review of Laibach and Irwin|accessdate = 2007-04-22] Cross imagery, and variations on the cross are apparent in many Laibach recordings and publications.

The visual imagery of Laibach's art (or 'Laibach Kunst', as it calls itself) has been described as 'radically ambiguous' [Monroe, Alexei. Interrogation Machine. MIT Press, 2005. p76.] , An early example of this ambiguity would be the woodcut entitled 'The Thrower,' also known as Metalec ("The Metal Worker"). This work features a monochrome silhouette of a figure with a clenched fist holding a hammer. The work could be seen by its original Slovene viewers as a poster promoting industrial protest, but the poster could have also been interpreted as a symbol of industrial pride. Another aspect of this woodcut is the large typefaced word 'LAIBACH', evoking memories of the Nazi occupation of Slovenia (when the capitol city was briefly known as Laibach). This piece was featured prominently during a TV interview of Laibach in 1983, during which the interviewer Jure Pengov called Laibach "enemies of the people." [Monroe, Alexei. Interrogation Machine. MIT Press, 2005. p161.]

Some early Laibach albums were pure industrial, with hard industrial percussions, heavy rhythms, and roaring vocals. Later in the mid-80s, the Laibach sound became more richly layered with samples from classical music—including from ’s . The band began their tradition of cover songs in 1987 with the album Opus Dei, where their sound was changed again to take on a more pop sound with classic pop structures. Fact|date=May 2008

Some early material by Laibach and later neoclassical releases by the band&mdash;such as 1990's "Macbeth" release&mdash;were influential on certain artists within the martial music genre.

The popular German musical group has acknowledged influence by both the aesthetic approach and material of Laibach. When members of Laibach were asked by an interviewer about Rammstein "stealing" from them, they responded that "Laibach does not believe in originality... Therefore, Rammstein could not 'steal' much from us. They simply let themselves get inspired by our work, which is absolutely a legitimate process. We are glad that they made it. In a way, they have proven once again that a good 'copy' can make more money on the market than the 'original.' " [cite web|url=http://www.legendsmagazine.net/139/laibach.htm|title=Interview: Laibach|accessdate = 2007-04-22] . Laibach would later provide a remix for the Rammstein single "Ohne Dich".

Out on via Laibach's own label NSK are 4 releases by the Laibach side-projects 300.000 VK and Rotor. From the electronic project Rotor featuring Mina Špiler (Melodrom/Laibach) comes "Phonophobia" and "Rotorsphere" which both combine 'modern technology effects, live-experimentations, DJ-compatible rhythms and techno-industrial mayhem' as they call it. Next is 300.000 VK with two reissues, "Hard Drive : Bill Gates" and "Paracelsus", the first holding mostly hard and fast drum'n'bass techno. "Paracelsus" from its side has been out of print for several years since its original release on . [ [http://www.side-line.com/news_comments.php?id=23812_0_2_0_C 4 Laibach side-project releases] ]

Laibach has been the subject of several documentaries:

In formed his very first band . [ [http://www.theslovenian.com/articles/ferfolja.htm the Slovenian ] ] Basically, was the first incarnation of Laibach. During summer holidays 1980 after the suggestion of Knez father, famous Slovenian painter and artist , the band changed the name into Laibach. This incarnation included , , , and . Soon after that, Knez's cousin and joined the band. In the first period Laibach were a quintet, but soon after that they declared that Laibach has only four members – ‘Vier Personen’. Sometimes those four members of the band were signed with their pseudonyms: Dachauer, Keller, Saliger and Eber. [ [http://www.nskstate.com/laibach/reviews/laibachkunstderfuge.php [ Nskstate.Com [ Laibach [ Konzert Fuer Das Kreuzschach Und Vier Schauspieler ] ] . From the mid ‘80s until mid ‘90s the four full time members were , , and . From time to time, some other persons, such as (from band), , famous bass player from the , and some other musicians (such as and ) joined Laibach. Slovene singer and radio announcer has also performed with the group.

Unfortunately, and became serious drug addicts Fact|date=July 2008, and both left the band. Knez joined the group again during the tour; and again on the promo concert of the in . In the meanwhile Knez was not in the band. Markošek again appears on the press photos for . On the press photos for album were , , and . Benko and Hladnik are members of the group Silence, and collaborators on the Volk album.

* In 2006, a fictional character modeled after Milan Fras, appears in the Kingdom Come hardcover "Absolute Edition" graphic novel. In it, he appears dressed in Laibach-style uniform and displays the groups's cross tattooed on his chest. He is described as follows: "German-speaking superhuman and would-be dictator is the example of the Hitleresque villain that had so much symbolic importance in the Golden Age of superheroes. The blocky cross on his chest is evocative of the kind of bold symbols used by Fascists. Von Bach has the words `liebe' (love) and `hass' (hate) tattooed on his arms and, in fact, his entire body has been covered with one large tattoo of that dark color that most tattoos become, with his natural flesh color only coming through in the designs on his body" [cite web|url=http://www.nskstate.com/laibach/reviews/laibach_among_superheroes.php|title= LAIBACH AMONG SUPERHEROES|accessdate = 2008-01-14] .