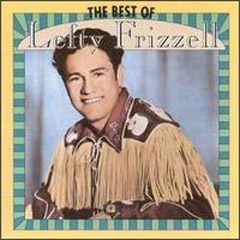 William Orville 'Lefty' Frizzell (, &ndash; , ) was an American and of the 1950s and a leading exponent of the style of country music. His relaxed style of singing was a major influence on later stars , , and .

Frizzell was born in Corsicana, the seat of Navarro County in east , but moved with his family shortly after his birth to El Dorado, , where the Frizzells remained until the early 1940s. Frizzell began playing the as a young boy. By the age of twelve, he was appearing regularly on a children's show at a local [http://www.totalradio.com/keldam.htm KELD] .

The family returned to when Frizzell was still a teenager, his music career having received a significant boost when he won a talent contest in Dallas.

Lefty, who was known as "Sonny" to his family, acquired the "Lefty" at the age of fourteen after a schoolyard scrap with another student. Part of Frizzell's early music lore pushed by his record company suggested the name came from winning a match, but this version was deemed untrue.

In his late teens, he was performing at grounds and other venues, developing a unique, soulful voice. Like his father, he got work in the , but his growing popularity as a singer soon gave him regular work on the nightclub circuit. At the age of nineteen, he had a half-hour show on a small Texas station, getting a big break when a record producer, heard him sing. Signed to , he immediately had a string of hits that broke into country music's top ten; several of them reached # 1. In 1950, he was invited to perform at the ; the following year he appeared on the prestigious radio program that broadcast from Shreveport, and then he and close friend 'Cowboy' Ralph Spicer began touring with country music's biggest star of the era, . Handbills of the time refer to them as "Kings of the Honky Tonks". A prolific , Frizzell had four songs in the country top ten at the same time in 1951 — a feat that would not be repeated on any chart until one-upped him, on the popular music/pop charts, with five songs in 1964.

In 1952, while he was speeding through Minden, the seat of in northwestern , Frizzell crashed his into the home of City and later State Representative R. Harmon Drew, Sr. , himself a state appeals court judge and a , recalls that his father always thought Frizzell had a "bad attitude". The Drews are descended from the first families to have settled Webster Parish. [R. Harmon Drew, Jr., to Earlene Lyle, Lyle newsletter, May 4, 2008]

By the end of the 1950s, was dominating the n music scene, but although no one would ever mistake Frizzell's music for anything but country, his 1959 hit, "," gained wide acceptance with a variety of music fans in addition to country, and was the first recording of this "standard."Fact|date=June 2007 A few years later, Frizzell recorded "Saginaw, Michigan," which took the #1 spot on the country music charts and broke into the pop charts as well.Fact|date=June 2007 The song earned him a nomination.

In the early 1970s, Frizzell changed record labels and moved to Bakersfield, , where he recorded several more country music hits and became the first country singer to perform at the . By then, however, his problems with were already taking their toll. and outbreaks of irrational became a trademark, and his constant failure to meet recording commitments strained his relationship with his recording company.

In 1972, Lefty Frizzell was inducted into the and his song "If You've Got the Money, I've Got the Time" earned him a . Unfortunately, success and money only added to Frizzell's alcohol addiction, and on , , he suffered a massive and died at age 47. He was buried on "Music Row" at in Goodlettsville, . In October 1982, Lefty was posthumously inducted into the .

Lefty Frizzell's signature guitar was a customized 1949 (Model SJ-200). Originally built by the Gibson Guitar Company, it was retrofit in early 1951 with a custom neck and pickguard by guitar maker and innovator . In a 2003 interview recalled, "When I was a teenager, Lefty got me onstage [at the Rainbow Garden in , California] and handed me that guitar. That is the first guitar I played on a professional stage." For many years it had been on loan to and displayed at the in . In January 2005 it was returned to the Frizzell family.

Frizzell's style of singing influenced a great many singers, particularly , and .

recorded a song called "Lefty's Gone" on the album "Something Special". In addition, Willie Nelson's 1977 album, "To Lefty From Willie" was a tribute to Frizzell and consisted entirely of cover versions of Frizzell songs. Frizzell was inducted into the in 1982 and has a star on the . He is also in the .

Fellow Texan was a devout fan of Frizzell's sound, and in 1988, as a part of the supergroup, the , he chose the name "Lefty Wilbury" to honor his musical hero.