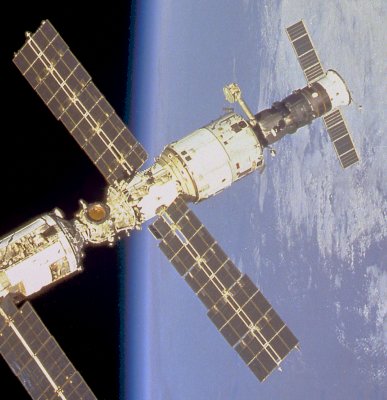 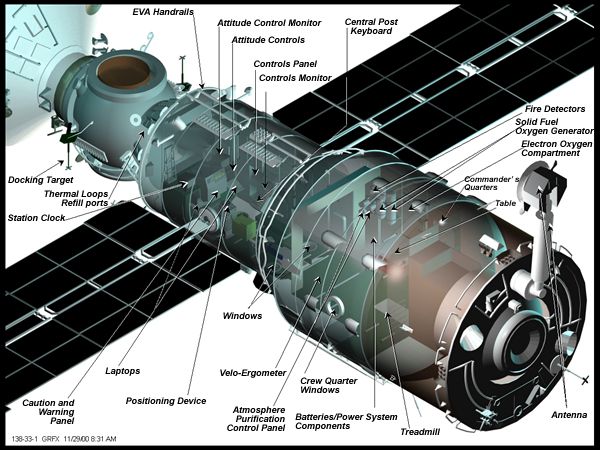 "Zvezda" ( _ru. Звезда, meaning "star"), DOS-8, also known as the "Zvezda Service Module", is a component of the (ISS). It was the third module launched to the station, and provides some of the station's s, as well as living quarters for two crew members. It is the structural and functional center of the n portion of the station - the .

The module was manufactured by and is currently the only fully Russian-built and funded module besides "". ("" was built by Russia, but was funded and is owned by the ). "Zvezda" was launched on a on July 12, 2000 and docked with the "Zarya" module on July 26. The rocket used for the launch was one of the first to carry advertising; it was emblazoned with the of the chain ,

The basic structural frame of "Zvezda", known as "DOS-8", was initially built in the mid-1980s to be the core of the "" space station. This means that "Zvezda" is similar in layout to the core module (DOS-7) of the "" space station. It was in fact labeled as "Mir"-2" for quite some time in the factory. Its design lineage thus extends back to the original stations. The space frame was completed in February 1985 and major internal equipment was installed by October 1986.

The "Transfer Compartment" attaches to the "Zarya" module, and has docking ports intended for the and the . Currently the lower port contains the Russian and the other is empty. It could be used as an airlock; however, if the hatch failed, it would be impossible to travel to the rest of the station, so this capability has never been used. Once the comes, before the launch, two crewmembers of will remove the Docking Compartment, relocate it on the zenith port of Zvezda, and install and activate the Multipurpose Laboratory and the .

The "Assembly Compartment" holds external equipment such as thrusters, antennas, and propellant tanks.

The "Transfer Chamber" is equipped with automatic docking equipment and is used to service Soyuz and .

"Zvezda" contains sleeping quarters for two cosmonauts, a -provided treadmill and a bicycle for exercise, toilet and other hygiene facilities and a galley with a refrigerator and freezer. It contains the primary Russian computers for guidance and navigation. It has a total of 14 windows -- three 9-inch diameter windows in the forward Transfer Compartment, a 16-inch window in the Working Compartment, one in each crew compartment, and several more. It also contains the Elektron system that electrolyzes condensed humidity and waste water to provide and . The hydrogen is expelled into space and the oxygen is used for breathing air. The condensed and the waste water can be used for drinking in an emergency, but ordinarily fresh water from Earth is used. There are 16 small thrusters and two large thrusters for propulsion, and eight batteries for storing power.

The Elektron system has required significant maintenance work, having failed several times and requiring the crew to use Solid Fuel Oxygen Generator canisters (commonly called "Oxygen Candles", which were the cause of a fire on "Mir") when it has been broken for extended amounts of time. It also contains the Vozdukh, a system which removes from the air based on the use of regenerable adsorbers of carbon dioxide gas. "Zvezda" has been criticized for being excessively noisy and the crew has been observed wearing earplugs inside it.

Connection to the ISS

On July 26, 2000, "Zvezda" became the third component of the ISS when it docked at the aft port of "Zarya". ("Zarya" had already been attached to the U.S. "Unity" module.) Later in July, the computers aboard "Zarya" handed over ISS commanding functions to computers on "Zvezda". [cite web |url=http://science.ksc.nasa.gov/shuttle/missions/sts-106/mission-sts-106.html |title=STS-106 |publisher=NASA]

The two main engines on "Zvezda" can be used to raise the station's altitude. This was done on 25 April 2007. This was the first time the engines had been fired since "Zvezda" arrived in 2000. [cite web |url=http://www.nasa.gov/home/hqnews/2007/apr/HQ_SS0723_station_status.html |title=International Space Station Status Report: SS07-23 |publisher=NASA]

Due to Russian financial problems, "Zvezda" was launched with no backup and no insurance. Due to this risk, NASA had constructed an in case it was delayed significantly or destroyed on launch.