Monocoque (pronounced /ˈmɒnɵkɒk/ or /ˈmɒnɵkoʊk/) is a construction technique that supports structural load by using an object's external skin, as opposed to using an internal frame or truss that is then covered with a non-load-bearing skin or coachwork. The term is also used to indicate a form of vehicle construction in which the body and chassis form a single unit. The word monocoque comes from the Greek for single (mono) and French for shell (coque). [1] The technique may also be called structural skin, stressed skin, unit body, unibody, unitary construction, or Body Frame Integral. Pure monocoques lack internal longitudinal stiffening but are heavier as a result.[citation needed] A semi-monocoque differs in having longerons and stringers.[2] Structures built up from hollow tube frames, such as bicycles are not usually monococques as the primary stresses are not applied to the surface of the tube, but rather to the ends.[citation needed]

Monocoque construction was pioneered in boats, such as with the Viking Longship and the Amerindian Canoe where it offered the low structural weight neccessary in vessels that were frequently expected to be beached or carried or portaged overland.[citation needed]

Modern use of moncocoque structures in other applications began in aviation where pioneers used their experience in boatbuilding to provide the necessary structures. Early designs appeared in 1912 such as the Deperdussin Monocoque, and had found widespread use by the late 1930s when it was applied to metal structures such as on the Douglas DC-3. Automobiles used monocoque designs as early as 1923 but widespread adoption did not begin until the second half of the 20th century. Today, a welded unit body is the predominant automobile construction technique. Monocoque designs also appear (albeit extremely rarely) on motorcycles and in architecture - such as with geodesic domes.[citation needed]

View of the inside of the tail of a Murphy Moose homebuilt aircraft under construction, showing the semi-monocoque design

Early aircraft were constructed using internal frames, typically of wood or steel tubing, which were then covered (or skinned) with fabric[3] such as irish linen or cotton.[4] Aircraft dope was then applied which tightened the fabric and provided a smooth sealed surface necessary to prevent excessive drag.[4]

This fabric could provide no strength in compression and little in tension so to resist buckling these aircraft relied on the rigidity of the framework. Some early aircraft designers began to use sheet metal or plywood but only to provide access to the inside of the airframe or for non-structural aerodynamic fairings. Due to the alloys available, this provided little additional strength however the experience in working with molded laminates would prove useful.[citation needed]

In 1912 Deperdussin introduced their monocoque racer using a fuselage made up of three layers of laminated strips of glued poplar veneer, which provided both the external skin and the main load-bearing structure.[5] This reduced drag so effectively it was able to win most of the races it was entered into.[6] This style of construction was copied, with some variations, in Germany by Albatros and others however it was prone to damage from moisture.[7]

Initially used only for skinning over an existing structure due to poor structural qualities, new aluminium alloys useful for structural purposes first appeared during World War I. By the late 1920s further improvements in its strength and durability allowed duralumin to be adopted extensively for internal framing members and the skin.[citation needed]

It was realised that if the skin were strong enough it could eliminate the need for internal framing but this would be heavy. Thin sheet metal gauges could easily resist tension and shear loads but buckled under bending and compression. However, if curved, corrugated or rolled into pipe, sheet metal could be made strong against bending and compression loads as well. Stressed skins began to be combined with greatly reduced internal stiffening and came to be what is now known as semi-monocoque. The first aircraft known to have used this new method of construction came from Dornier, the Dornier D.I of 1918 for example, but, although of considerable official interest, it was ignored by other aircraft manufacturers.[citation needed]

In the meantime, the Junkers F.13 and the Ford Trimotor, which loosely copied the Junkers structural design, retained an internal aluminium frame but covered these with a thin skin of corrugated aluminium sheeting. The corrugations allowed the aircraft's skin to take compression and bending loads, replacing ribs and stringers and could be regarded as a stressed skin structure augmented by an internal frame or semi-monocoque structure. The skin itself was now a significant structural element and it was to become even more important when airframes were required to take ever increasing loads.[citation needed]

In the 1930s huge increases in engine power, speed, and operating altitudes required monoplanes and streamlined airframes with stiff, strong skins which semi-monocoque construction was ideal for. Torsional (twisting) stiffness was essential to avoid aerolastic deformation under the rising aerodynamic loads and structures that did not make use of the skin as a structural element could not handle the loads without being excessively thick. An outstanding example is the Douglas DC-3. World War II was a major catalyst for aircraft development. At the beginning of the war many aircraft still used mixed construction and relied on internal frames but by the end of the war all high-performance airplanes used semi or full monocoque construction. Sheetmetal is strongest when curved in more than two directions, but this requires expensive stamping machines or the laborious use of English wheels. The cost of these machines delayed the introduction of this technique in many countries, such as Italy, Holland and France.[citation needed]

Cutaway drawing of the 1934 Citroen

Similar to aircraft, automobile designs originally used body-on-frame construction, where a load-bearing chassis consisting of frame, powertrain, and suspension formed the base vehicle, and supported a non-load-bearing body or coachwork. Over time, this was supplanted by monocoque designs, integrating the body and chassis into a single unit. The external panels may be stressed, in such cases as the rocker panels, windshield frame and roof pillars, or non-stressed, as is often the case with fenders. Today, spot welded unit body is the dominant technique, although some vehicles (particularly trucks and buses) still use body-on-frame.[citation needed]

Tanks and other armored vehicles generally use a body or chassis which is built of the armor rather than attaching armor to a body-on-frame design. Though this generally produces a fairly heavy vehicle, it can reduce weight for a given amount of armor compared to soft-skinned vehicles to which armor has been added either as a modification or a kit. For example, the German Fuchs 2 [8] and RG-33 have monocoque hulls rather than a separate body and frame, while the truck-based M3 Half-track and up-armored humvee have separate bodies to which armor has been added. 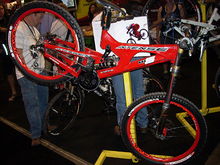 Traditional bicycles are not monocoques; they are classic framed structures. However, carbon fibre monocoque framesets are slowly emerging in high-end competitive bicycles, due to their stiffness and light weight. The American company Kestrel USA pioneered [9] the use of carbon fibre monocoques in bike frame manufacture in the 1980s, and since then the technique has become increasingly widely used. Items such as seat-posts and other components are now employing the same technique.

A Grand Prix motorcycle racing monocoque motorcycle was developed in 1967 by Ossa, a Spanish motorcycle brand. Notable designers such as Eric Offenstadt [10] and Dan Hanebrink [11] created unique monocoque designs in the early 1970s. The 1973 Isle of Man TT was won by Peter Williams on the monocoque-framed Norton John Player Special. Honda also experimented with a monocoque motorcycle in 1979 with its NR500.[12] In 1987 John Britten developed the Aero-D One featuring a composite monocoque chassis that only weighed 12 kg.[13] In 2009 Ducati introduced the Desmosedici GP9 with a carbon fibre semi-monocoque chassis. 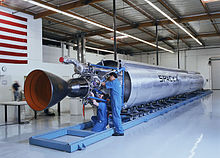 First-stage view of the Falcon I rocket

Various rockets have used pressure-stabilized monocoque designs, including Atlas[14] and Falcon I.[15] Atlas was very light weight since its sole structural support was provided by its single-wall steel "balloon" fuel tanks, which held their shape by internal pressure. 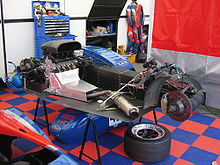