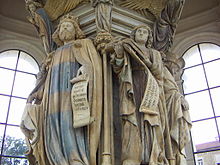 David and a prophet from the Well of Moses

Claus Sluter (born 1340s in Haarlem [1]; died in 1405 or 1406, Dijon) was a sculptor of Dutch origin.[2] He was the most important northern European sculptor of his age and is considered a pioneer of the "northern realism" of the Early Netherlandish painting that came into full flower with the work of Jan van Eyck and others in the next generation.

Sluter probably worked in Brussels before moving to the Burgundian capital of Dijon, where from 1385 to 1389 he was the assistant of Jean de Marville, Court Sculptor to Philip the Bold, Duke of Burgundy. From 1389 to his death he was Court Sculptor himself, with the rank of valet de chambre. He was succeeded by his nephew Claus de Werve.

He restored the monumental scale and naturalism of the classical era to figural sculpture. His later work is highly emotional, using facial expressions, figural stance, and drapery; this can be particularly seen in the heavy folds of cloth that so many later imitators draped around their figures. His most famous surviving work is the Well of Moses (1395–1403), created for the Carthusian monastery of Champmol built by Philip the Bold just outside Dijon (at the time - now part of the city). Sluter was also responsible for the main part of the work on Philip's tomb, which (restored and partly reconstructed) has been moved to the former ducal palace in Dijon.

Claus Sluter was an excellent sculpter.