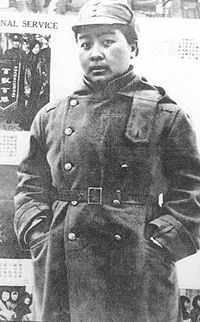 Ding Ling was born into a gentry family in Hunan province. Her father's health was poor, and he died when Ding was three. Ding Ling's mother, who raised her children alone while becoming an educator, was Ding's role model, and she would later write an unfinished novel, titled Mother, which described her mother's experiences. Following her mother's example, Ding Ling became an activist at an early age.[2] Ding Ling early repudiated traditional Chinese family practices by refusing to marry her cousin who had been chosen to become her husband. She rejected the commonly accepted view that parents as the source of the child's body are its owners, and she ardently asserted that she owned and controlled her own body. She joined the Chinese Communist Party in 1932, a year after her husband, Hu Yepin, an impoverished worker, poet and Communist activist, had been executed in jail by the Kuomintang. By then, Ding Ling had become well known as the author of Miss Sophia's Diary (莎菲女士的日記, Shāfēi Nüshì de Rìjì), published in 1927, in which a young woman describes her unhappiness with her life and confused romantic and sexual feelings.

Active in the Communist revolutionary cause, she was placed under house arrest in Shanghai by the Kuomintang for a three year period from 1933-1936. Long after the defeat of Chiang Kai-Shek's Nationalist government she suffered even harsher treatment throughout her literary career because of the shifting Communist Party politics and power struggles. Always a political activist, in 1957 she was denounced as a "Rightist" and her fiction and essays were banned. She spent five years in jail during the "Cultural Revolution" and was sentenced to do manual labour on a farm for twelve years before being "rehabilitated" in 1978. In her introduction to Miss Sophie's Diary And Other Stories, Ding Ling explains her indebtedness to the writers of other cultures:

"I can say that if I have not been influenced by Western literature I would probably not have been able to write fiction, or at any rate not the kind of fiction in this collection. It is obvious that my earliest stories followed the path of Western realism....A little later, as the Chinese revolution developed, my fiction changed with the needs of the age and of the Chinese people....Literature ought to join minds together...turning ignorance into mutual understanding. Time, place and institutions cannot separate it from the friends it wins... And in 1957, a time of spiritual suffering for me, I found consolation in reading much Latin American and African literature."

A few years before her death, she was allowed to travel to the United States where she was a guest at the University of Iowa's International Writing Program. She authored more than three-hundred works. After her "rehabilitation" many of her previously banned books such as her novel The Sun Shines Over The Sanggan River were republished and translated into numerous languages. Some of her short works, spanning a fifty year period, are collected in I Myself Am A Woman: Selected Writings Of Ding Ling.