Compasrose Flag of the Anglican Communion

Compasrose Flag of the Anglican Communion 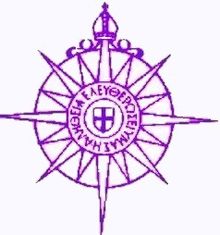 The emblem was originally designed by the late Canon Edward West of the Cathedral of St. John the Divine in New York

The Compasrose Flag of the Anglican Communion was designed in 1954[1] by Canon Edward N. West of the Cathedral of Saint John the Divine in New York for the Second International Anglican Congress in Minneapolis, Minnesota. The Compass Rose was modernized in 1988 and the new design was laid into the floor of Canterbury Cathedral during the Twelfth Lambeth Conference of Anglican bishops.

At the centre of the circular emblem is the Cross of St George, a reminder of the origins of the Anglican Communion, and a link unifing the past to the Communion today.

Encircling the cross is a band bearing the inscription, "The Truth shall make you free." It is written in the original New Testament Greek, the traditional language of scholarship within the Anglican Communion.

From the band radiate the points of the compass. The compass symbolizes the worldwide spread of the Anglican Faith.

Surmounting the shield, at the North, is a mitre, the symbol of apostolic order essential to all Churches and Provinces constituting the Anglican Communion.

The design was adapted with the colors of blue and gold and made into a flag by Canadian-born priest, Father Andrew Notere. The Archbishop of Canterbury received the first flag at Lambeth Palace in December 1990, and the flag was officially inaugurated at the Meeting of the Primates of the Communion in Belfast in April 1991.