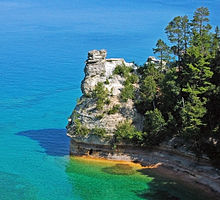 Pictured Rocks National Lakeshore is a U.S. National Lakeshore on the shore of Lake Superior in the Upper Peninsula of Michigan, United States. It extends for 42 miles (67 km) along the shore and covers 73,236 acres (114 sq mi; 296 km2). The park offers spectacular scenery of the hilly shoreline between Munising, Michigan and Grand Marais, Michigan, with various rock formations like natural archways, waterfalls, and sand dunes.

Pictured Rocks derives its name from the 15 miles (24 km) of colorful sandstone cliffs northeast of Munising. The cliffs are up to 200 feet (60 m) above lake level. They have been naturally sculptured into shallow caves, arches, formations that resemble castle turrets, and human profiles, among others. Near Munising visitors also can view Grand Island, most of which is included in the Grand Island National Recreation Area and is preserved separately.

The U.S. Congress made Pictured Rocks the first officially-designated National Lakeshore in the United States in 1966. It is governed by the National Park Service (NPS), had 22 year-round NPS employees as of May 2006, and received 476,888 visitors in 2005. 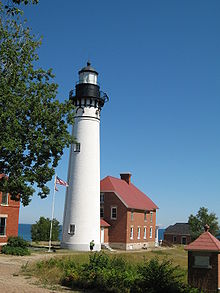 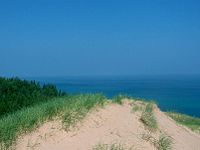 The colors in the cliffs are created by the large amounts of minerals in the rock. The cliffs are composed of the Munising Formation of 500 million year old Cambrian period sandstone. The Munising Formation sits atop a Precambrian sandstone of the Jacobsville Formation. The mottled red Jacobsville Formation is the oldest rock in the park. On top of the Munising Formation is the younger Au Train Formation from the Ordovician period. The Au Train Formation is a hard sandstone and acts as a "cap" over the other layers. Streaks on the face of the cliffs come from the groundwater leaching out of the rock. With it come iron (red), manganese (black-white), limonite (yellow-brown), copper (pink-green) and other minerals. As the water evaporates, these minerals leave streaks of color.[1]

Although the Pictured Rocks lie adjacent to sections of Lake Superior that are rich in fish, the sandstone cliffs are dangerous to canoes and other open boats skirting the coastline. Pierre Esprit Radisson, the fur trader, made this risky passage in 1658 and noted that his Native American companions offered some tobacco to the local spirit of the cliffs.

During the Romantic Era of the 1800s, a series of American writers described their feelings upon sight of the Pictured Rocks. Henry Rowe Schoolcraft visited in 1820 and remarked upon "some of the most sublime and commanding views in nature".[2] As long ago as 1850 developers planned a tourist resort, Grand Island City, adjacent to the Pictured Rocks near the current site of Munising.

After the lumbering era ended around 1910, many of the parcels of land making up the current Pictured Rocks National Lakeshore reverted to the state of Michigan for unpaid property taxes. Eager for federal help and recognition, the state cooperated with the federal government in the region's redevelopment. Congress enacted a law in 1966 to elevate the shoreline between Munising and Grand Marais to the status of a National Lakeshore.[3]

In October 1966, Congress passed a bill authorizing the establishment of the Pictured Rocks National Lakeshore in Michigan's Upper Peninsula, “in order to preserve for the benefit, inspiration, education, recreational use, and enjoyment of the public, a significant portion of the diminishing shoreline of the United States and its related geographic and scientific features.” When President Lyndon Johnson signed the bill, Alger County became the home of America’s first National Lakeshore.

Munising, on the western end of the lakeshore, is accessed by M-28 and M-94. Grand Marais, on the eastern end, is reached by M-77.

Paved highways penetrate part way into the lakeshore from both ends. Travelers seeking to drive from one end of the lakeshore to the other must use County Road H-58. Roads only come close to the shoreline near Miners Castle, 12 Mile Beach, and the Grand Sable Dunes. The rest of the shoreline is only seen from land by hiking.

A 42-mile (67-km) section of the North Country Trail spans the lakeshore.

Pictured Rocks Cruises[5] offers daily trips from Memorial Day weekend through October 10. Sea kayaking is a popular method of exploring the park. While this may be the best way to see the natural formations, it is a serious trip in dangerous and cold water, which should not be undertaken lightly or without proper equipment. Guides are available. The most efficient port of entry to Pictured Rocks, for a sea kayak, is from the harbor at Munising.[6]

Camping must be done only in designated areas, and is strictly regulated by the National Park rangers.

Pictured Rocks has worked to make much of its rugged environment accessible,[7] including the following: 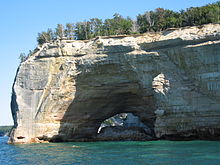 Rock arches and sea caves are popular with kayakers 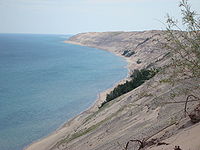 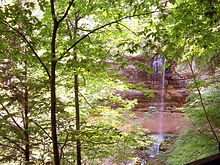 Pictured Rock is the home of many of Michigan's waterfalls. Most of the waterfalls resulted from water running over cliffs of the Munising Formation. This lime and sandstone formation exists between Tahquamenon Falls, some 75 miles (121 km) east, to Laughing Whitefish Falls, 30 miles (48 km) miles west of the Lakeshore. Pets are not allowed on most of the trails.[8] 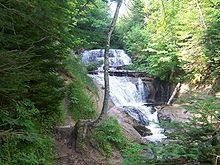 The Grand Sable Dunes, at the eastern end of the Lakeshore, are a perched dune formation. Sand washed ashore by wave action was then blown upslope by northerly prevailing winds until it came to rest atop a glacial moraine. The Grand Sable Dunes today form a sand slope that rises from Lake Superior at a 35° angle. The summits of the tallest dunes are as high as 275 feet (85 m) above lake level.

Pictured Rocks in the distance.
Categories: