In African music, the mbira (also known as Likembe, Mbila, Thumb piano, Mbira Huru, Mbira Njari, Mbira Nyunga Nyunga, Karimbao or Kalimba) is a musical instrument that consists of a wooden board to which staggered metal keys have been attached. It is often fitted into a resonator. In Eastern and Southern Africa there are many kinds of mbira, usually accompanied by the hosho. Among the Shona people there are three that are very popular (see Shona music). The Mbira is usually classified as part of the lamellaphone family. It is also part of the idiophones family of musical instruments. In some places it is also known as a sanza or sansa.

In the late 1960s to early 70s sanza was the generic term used to describe these members of the lamellophone family. Mbira has now become so well known due to the worldwide stage performance and recordings of Thomas Mapfumo whose music is based on and includes the mbira, and the work of Dumisani Maraire who brought marimba and karimba music to the US Pacific Northwest, Ephat Mujuru who was one of the pioneer teachers of mbira in the US, and the writings and recordings of Zimbabwean musicians made by Paul Berliner. Mbira has now replaced sanza as the generic term. Dr. Joseph H. Howard, owner of the largest collection of drums and ancillary folk instruments in the Americas, often stated it is "the instrument most typical of Africa." By this he meant that the instruments were only found in areas populated by Africans or their descendants. Babatunde Olatunji made a similar statement in his book "Musical Instruments of Africa." He states the mbira "a finger xylophone, is native to Africa and is common throughout the continent. It is known nowhere else except in parts of the Americas where it was taken by Africans." 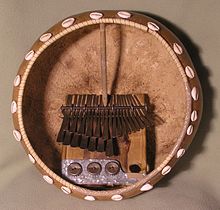 Mbira dzavadzimu in a deze. 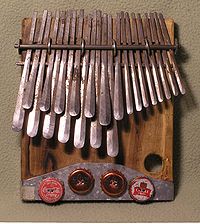 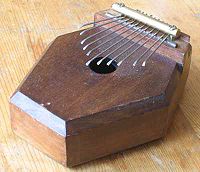 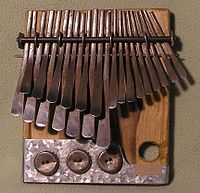 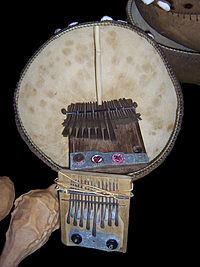 A typical mbira dzavadzimu consists of between 22 and 28 keys constructed from hot- or cold-forged metal affixed to a hardwood soundboard (gwariva) in three different registers—two on the left, one on the right.

Bottle caps, shells, or other objects ("machachara"[2]) are often affixed to the soundboard to create a buzzing sound when the instrument is played. In a traditional setting, this sound is considered extremely important, as it is believed to attract the ancestral spirits.

During a public performance, an mbira dzavadzimu is frequently placed in a deze (calabash resonator) to amplify its sound.

The mbira dza vadzimu is very significant in Shona religion and culture, considered a sacred instrument by natives. It is usually played to facilitate communication with ancestral spirits. Within the Shona tradition, the mbira may be played with paired performers in which the kushaura, the caller, leads the performed piece as the kutsinhira, the responder, "interlocks" a subsequent part.[3]

Tunings vary from family to family, referring to relative interval relationships and not to absolute pitches. The most common tuning is Nyamaropa, similar to the western Mixolydian mode. Names may also vary between different families. For example, Garikayi Tirikoti has developed a "mbira orchestra" that has seven different tunings, each starting on a different interval of the same seven-note scale, where it is possible to play all instruments in a single performance. The seven tunings that Garikayi uses are: Bangiza, Nyabango, Nhemamusasa, Chakwi, Taireva, Mahororo, and Mavembe (all of which are also names of traditional songs save for Mavembe and Nyabango). The closest to what is commonly named "Nyamaropa" is his "Nhemamusasa" tuning.

Historically, mbira tunings have not mapped exactly onto Western scales; it is not unusual for a seven-note sequence on a mbira to be "stretched" over a greater range of frequencies than a Western octave and for the intervals between notes to be different from those in a Western scale. Tunings have often been idiosyncratic with variations over time and from one player to another. A mbira key produces a rich complex of overtones that varies from one instrument to another depending on its maker's intentions and accidents of fabrication, such that some instruments simply sound better when some notes of a familiar tuning are pushed. With the increased popularity of the mbira in North America, Europe, and Japan in recent decades, Zimbabwean mbira makers have tended to tune their instruments more uniformly for export, but much variation is still found among mbira in their homeland.

Common names for tunings are

Jeke (Jack) Tapera introduced the Mbira Nyunga Nyunga in the 1960s from Tete province of Mozambique to Kwanongoma College of African music (now United College of Music) in Bulawayo. Two keys were then added to make fifteen (Chirimumimba, 2007), in two rows. The mbira nyunga nyunga is similar in construction to the Mbira Dzavadzimu, but has no hole in the soundboard. Key pitch radiates out from the center, rather than from left to right.

Recently a Midlands State University (Gweru, Zimbabwe) lecturer in the department of music and musicology has suggested a letter notation; the upper keys as (from first left upper key) E, D, C, F, C, D, and E and the lower or bottom keys as (from the first lower key) A, G, F, A, F, C, D, and E. But the Maraire number notation has remained the internationally accepted system (Chirimumimba, 2007).

Mark Holdaway of Kalimba Magic has introduced a graphic form of tablature for the karimba, and traditional karimba tunes as well as modern songs and new compositions and exercises are available in this tablature.