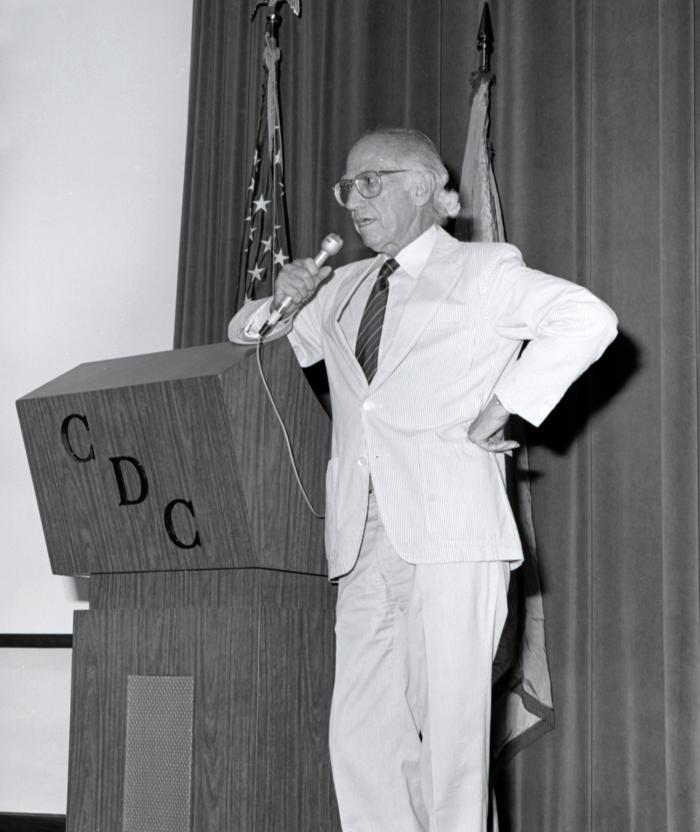 Jonas Edward Salk ( &ndash; , ) was an American and best known for the research and development of a killed-virus , the ous "Salk ".

During his life, Salk worked in , , Pittsburgh and . In his later career, he devoted much energy toward the development of an .

While being interviewed by on "" in 1955, Salk was asked: "Who owns the patent on this vaccine?" Surprised by the question's assumption of the requirement of a profit motive for his creation, he responded: "There is no patent. Could you patent the sun?" [YouTube|QHGKLbDt_2Q|YouTube - SiCKO DVD Extra Preview - Interview Gallery]

Jonas Salk was born in to Russian-ish immigrant parents, Dora and Daniel B. Salk. He had two brothers, Lee and Herman Salk. Herman became a , and Lee became a . Jonas graduated from and then went to the , where he earned a B.Sc. He received a from the School of Medicine at in June 1939.

While in college he met his future wife, Donna Lindsay, whom he married on , . They had three children: Peter, Darrell, and Jonathan. In 1968, they divorced, and in 1970 Salk married , the former mistress of .

As a child, Salk did not show any interest in medicine or science in general. He says in an interview with the :Fact|date=December 2007

His first desire was to become a and only due to his mother's persuasion (which included her telling him he wouldn’t be good at it), he changed from a pre-law student to a pre-med student. During his first year in medical school, he was offered the chance to do research and teach . He recalls this experience in the previously mentioned interview:

:At one point at the end of my first year of medical school, I received an opportunity to spend a year in research and teaching in biochemistry, which I did. And at the end of that year, I was told I could, if I wished, switch and get a Ph.D. in biochemistry but my preference was to stay with medicine. And I believe that this is all linked to my original ambition, or desire, which was to be of some help to humankind, so to speak, in a larger sense than just on a one-to-one basis.Fact|date=December 2007

While attending the NYU School of Medicine, he heard two lectures that would change his life forever. Salk reflected on the lectures in 1990:

:In the first lecture, we were told that it was possible to immunize against and by the use of a chemically treated toxin [to kill it] ... In the very next lecture, we were told that in order to immunize against a disease it was necessary to go through the experience of infection. It was not possible to kill the virus... The light went on at that point. I said that those two statements can’t possibly both be true. One has to be false.Fact|date=December 2007

In 1938, while still in college, Salk began working with Dr. on an influenza vaccine. In 1941, Francis was appointed the head of the department at the newly formed School of Public Health at the , and Salk, who in 1942 won a ship, followed him. Together they worked to develop an influenza vaccine at the behest of the . Salk advanced to the position of assistant professor of and continued his work on .

After medical school, Salk first worked as a staff physician at the in New York City. Later, he worked for Dr. Francis's virus lab at the in Ann Arbor. In 1947, he moved to Pittsburgh, where he led the at the .

During the 1950s, Salk developed, tested and refined the first successful killed-virus , using inactive (dead) poliovirus cells that were injected into the body. In 1955 he began immunizations at Pittsburgh's Arsenal Elementary School in the Lawrenceville neighborhood. ( had already in 1950 initiated the use of an oral attenuated-live-virus polio vaccine, which would prove to be the future of polio immunization.)

In 1965, Salk struck out on his own, leaving the and establishing the Salk Institute for Biological Studies in , where the major focus of study was and . The first faculty included many distinguished members such as and . Salk directed the institute until his retirement in 1985.

During Salk's last years, he co-founded The Immune Response Corporation with to search for a vaccine against , and patented a p24- vaccine as "Remune".

In 1947, Salk received a position at the , as the head of the Virus Research lab. Though he continued his research on improving the influenza vaccine, he set his sights on the virus. Although about 99% of cases of polio are asymptomatic, the can attack the and within a few hours of infection, can occur. The for paralytic cases is about 5-10%. Death usually occurs when the breathing muscles become paralyzed. Polio was sometimes hard to diagnose because of its -like symptoms, which include stiff neck, fever, and headache.

At that time, it was believed that immunity can come only after the body has survived at least a mild infection by live virus. In contrast, Salk observed that it is possible to acquire immunity through contact with inactivated (killed) virus. Using , Salk killed the polio virus, but kept it intact enough to trigger the necessary immune response. Salk's research caught the attention of , president of the (now known as the Foundation). The organization decided to fund Salk's efforts to develop a killed virus vaccine.

The vaccine was first tested in monkeys, and then in patients at the . After successful tests, in 1952, Salk tested his vaccine on volunteering parties, including himself, the laboratory staff, his wife, and his children. In 1954, national testing began on two million children, ages six to nine, who became known as the . This was one of the first placebo-controlled tests, which has since become standard: half of the treated received the vaccine, and half received a , where neither the individuals nor the researchers know who belongs to the control group and the experimental group. One-third of the children, who lived in areas where vaccine was not available, were observed in order to evaluate the background level of polio in this age group. On , , the results were announced: the vaccine was safe and effective. The patient would develop immunity to the live disease due to the body's earlier reaction to the killed virus.

Salk's vaccine was instrumental in beginning the , a once widely-feared disease. Polio epidemics in 1916 left about 6000 dead and 27,000 paralyzed in the United States. In 1952, 57,628 cases were recorded in the U.S. After the vaccine became available, polio cases in the U.S. dropped by 85-90 percent in only two years. Unfortunately, some drug companies manufactured contaminated polio vaccine containing live virus, and this error cost dozens of lives. However, the live-virus oral vaccine developed by became the preferred alternative after a sometimes intense clash between the two scientists and their adherents. The Salk vaccine, which is injected, proved to be effective in sharply reducing the number of polio cases in the United States. A disadvantage to Salk's vaccine was that booster shots had to be taken periodically. The Sabin vaccine had the advantage of easier delivery and became accepted in the United States after the testing abroad. It was licensed in 1961 and eventually became the vaccine of choice in most parts of the world. The last indigenous case of polio in the U.S. was reported in 1991. Partly because of that fact, only inactivated, Salk-type polio vaccines have been recommended for use in the United States since 2000. [ [http://www.cdc.gov/vaccines/vpd-vac/polio/default.htm CDC figures] ]

The Salk vaccine was based upon plasmid fact|date=August 2008. Esther M. Zimmer Lederberg and Jonas Salk were colleagues and friends. However, Lederberg had expressed reservations concerning polio and the Salk vaccine. was quite well aware that from an epidemiological viewpoint it was possible that Salk's vaccine was not as effective as he thought. Specifically, the incidence of polio was noted to occur in waves. Thus, Lederberg wondered whether the marked reduction in polio cases was due to Salk's vaccine or the end of a wave of infection (and Salk's vaccine having little effect). Lederberg felt that Salk could have done more to elucidate this possible ambiguity had he kept better records. [http://www.estherlederberg.com/Anedcotes.html]

*In 1977, he was awarded the from President , with the following statement accompanying the medal:

:"Because of Doctor Jonas E. Salk, our country is free from the cruel epidemics of poliomyelitis that once struck almost yearly. Because of his tireless work, untold hundreds of thousands who might have been crippled are sound in body today. These are Doctor Salk's true honors, and there is no way to add to them. This Medal of Freedom can only express our gratitude, and our deepest thanks." [cite web |url= http://www.medaloffreedom.com/JonasSalk.htm |title= Presidential Medal of Freedom Recipient Dr. Jonas E. Salk | date=, ]

* In the late 1950s Salk was elected to the , which was dedicated in on ,
*On December 5, 2007, California Governor and First Lady inducted Salk into the , located at . [ [http://www.californiamuseum.org/Exhibits/Hall-of-Fame/inductees.html Salk inducted into California Hall of Fame] , California Museum, Accessed 2007]