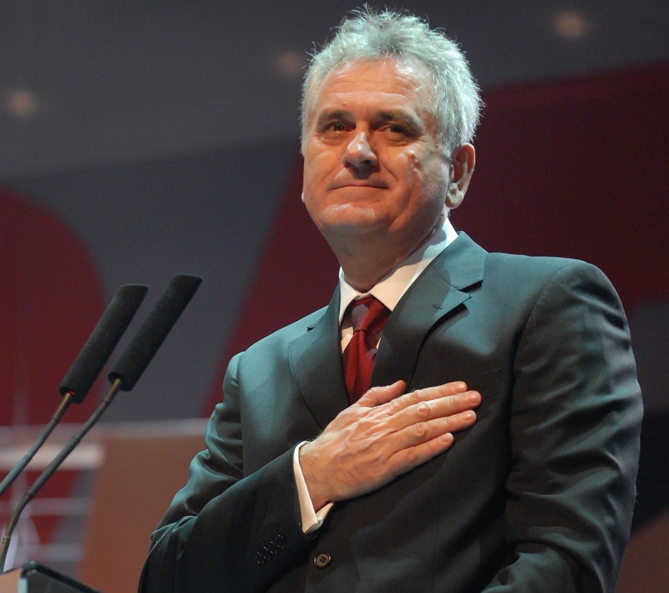 Tomislav Nikolić ( _sr. Томислав Николић, Audio|TomislavNikolic.ogg|listen) (born , ) is a Serbian politician, President of the . He is also a former member of the where he served as Deputy Leader of the party and parliamentary leader during the absence of from , until he resigned on , following a disagreement with Šešelj.

He served as Speaker of the National Assembly of Serbia between , and , and was Deputy Prime Minister in the coalition government of from 1999 to 2000.

Nikolić was born in . He trained as a construction technician, finishing in his home town as an average student in the elementary school and the Technical High School. After dropping out of the Faculty of Law of the city's University he got a job and worked at the construction company "Žegrap". He led the construction of the , as well as conducting other works in Majdanpek, , , , and elsewhere in the former Yugoslavia. He headed the investments department of the company "22. decembar" for twelve years. For two years he was the technical director of the communal works in Kragujevac.

Parliamentarians elected Nikolić the Speaker of Parliament on , . Nikolić defeated Milena Milošević of the Democratic Party by 142 to 99 votes out of 244 members of Parliament. The Democratic Party of Serbia endorsed him. Hajredin Kuci of the , Ylli Hoxha of the , and condemned the election of Nikolić as "counterproductive and dangerous for ". [cite web |url=http://www.birn.eu.com/en/82/15/2826/ |title=Kosovo Condemns Nikolic Appointment |accessdate=2007-05-09 |publisher=Balkan Investigative Reporting Network |date=2007-05-09] On Nikolić met with Russian Ambassador Aleksandr Alekseyev and gave a speech to Parliament in which he advocated making Serbia part of a - , saying that together they would "stand up against the hegemony of America and the European Union." [cite web |url=http://www.rferl.org/featuresarticle/2007/5/D272D5D8-F93D-4337-A490-C1A723B00483.html |title=Serbian Parliament Speaker Calls For Closer Russia Ties |accessdate=2007-05-09 |publisher=Radio Free Europe |date=2007-05-09]

He resigned from his position as speaker on May 13 after the Democratic Party and the formed a preliminary alliance in preparation for a coalition government. He was the Speaker with the shortest mandate in the history of parliamentary democracy in the Balkans.

Nikolić ran in the presidential election of 2000, finishing in third place behind and .

Nikolić also ran in the 2003 Serbian presidential election where he achieved most votes in the first round with 46,23%, ahead of , but the results of the election were invalid due to a turnout of only 38,80%.

Nikolić made yet another bid for presidency in the . In the first round, he received 30.1% of the vote and received 27.3%. In the second round held on , Nikolić lost to Tadić having only secured 45.4% of the vote, while Tadić obtained 53.7%.

Resignation and the Serbian Progressive Party

Nikolić abruptly resigned from Radical Party leadership on , . Serbian media cites differences between Nikolić and other Radical Party hierarchy, especialy party leader Vojislav Šešelj, about how the party should react to proposed membership for Serbia. [cite news|url=http://afp.google.com/article/ALeqM5gSODx7lXC9y_DIgjBstHpJG7IW2w |title=Top Serbian ultra-nationalist quits posts over EU: report |publisher=AFP |date=2008-09-06 |accessdate=2008-09-08] In the following days Nikolić formed a parliamentary group with a number of other Radical Party representatives called Napred Srbijo ("Forward, Serbia"). [cite news|url=http://www.b92.net/eng/news/politics-article.php?yyyy=2008&mm=09&dd=08&nav_id=53304 |title=Nikolić forms own parliamentary club |publisher=B92 |date=2008-09-08 |accessdate=2008-09-08] Nikolić stated to the press that the "old Serbian Radical Party no longer exists". [ http://www.mtsmondo.com/news/vesti/text.php?vest=108927 ] On , Vojislav Šešelj addressed to all Radical Party members by the letter. He named Nikolić and his group as "traitors, western puppets and agents". He also called all SRS members to remain loyal to the ideology of "Serbian nationalism, anti-globalism and pro-Russian politics". [ [http://www.srs.org.yu/index.php?a=183] ] On , Nikolić and his group were officialy ejected from the Radical Party. [http://www.mtsmondo.com/news/vesti/text.php?vest=109274] In reply, Nikolić announced he would form his own party. [http://www.setimes.com/cocoon/setimes/xhtml/en_GB/newsbriefs/setimes/newsbriefs/2008/09/12/nb-05] The founding congress is to be held on . [http://www.setimes.com/cocoon/setimes/xhtml/en_GB/newsbriefs/setimes/newsbriefs/2008/09/17/nb-04]

In 2005, the Humanitarian Law Center asked the War Crimes Prosecution Office to investigate a massacre committed in the village of Antin in , in August 1991. Survivors claimed that it was committed by the members of volunteer units “Šešelj’s followers”, among whom Tomislav Nikolić was mentioned. The inspiration for initiating such a claim were previous statements of Nikolić regarding his involvement in the . He was awarded a title of chetnik voivode ("Chetnik duke") by Vojislav Šešelj for “showing by a personal example how one should fight for the Serb ideal in the battles in Slavonia”. [ [http://cm.greekhelsinki.gr/index.php?cid=810&sec=194 The Humanitarian Law Center demands investigation of the war crimes in Antin] Greek Helsinki Monitor]

The suspicion that Nikolić had taken part in the killing of civilians in Antin was first raised by , a member of the , who first revealed information about the Antin massacre in an interview to RFE in June 2005. In the same month, , former chief of the Government Communications Bureau, revealed more details in the interview to "Insajder" saying that he had learned about these allegations from , former head of State Security. [ [http://www.youtube.com/watch?v=UfMijGa1GNs Jovica Stanisic: Tomislav Nikolic je pobio desetak baba] B92] , activist, wrote in a public letter that she was in possession of evidence that indicates Nikolić had personally participated in the killing of elderly residents of Antin. [ [http://cm.greekhelsinki.gr/index.php?cid=810&sec=194 Proofs of the Crimes in Antin in 1991 and of the responsibility of Tomislav Nikolić and the Yugoslav National Army] Greek Helsinki Monitor ]

Nikolić did not deny claims that he was stationed in Antin at the time, but has stated that there were no civilian deaths in Antin and that he himself never fired a bullet. [ [http://arhiva.kurir-info.co.yu/Arhiva/2005/jun/15/V-01-15062005.shtml Intervju: Tomislav Nikolić 15.6.2005.] Kurir] Tomislav Nikolić filed a lawsuit on September 12, 2005, as Kandić stated on that "some civilians in the Croatian village of Antin suffered under his hand in 1991."